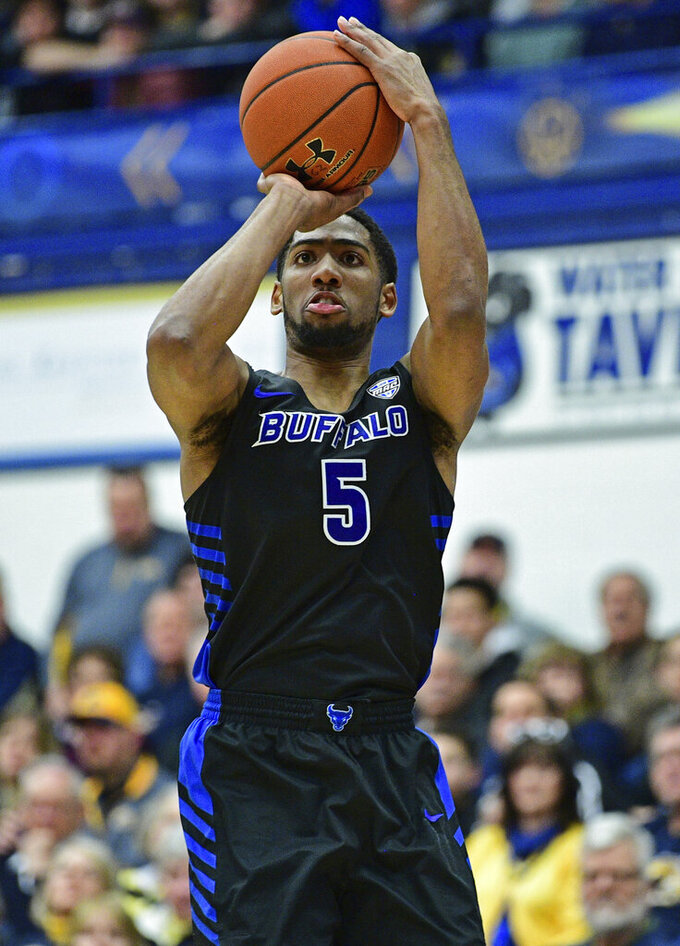 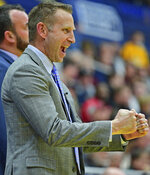 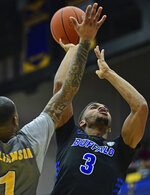 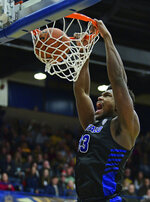 CJ Massinburg and Nick Perkins scored 20 points apiece as No. 14 Buffalo pulled away in the final minutes and avoided dropping its second Mid-American Conference game in four days with an 88-79 win over Kent State on Friday night.

The Bulls (18-2, 6-1 MAC) were stunned earlier this week at Northern Illinois. But showing their tournament-tested toughness and poise down the stretch, they held off the upset-minded Golden Flashes (15-5, 4-3), who hosted their first ranked opponent since 1989.

"We played probably 30 minutes of pretty good basketball," said Buffalo coach Nate Oats. "We struggled on offense a little bit and couldn't get much going. But I thought our defense and just our maturity and experience got us the win."

Clinging to a 78-75 lead, Buffalo forced Kent State into three straight turnovers and converted each time to open some breathing room. The Golden Flashes also had a shot go in and out during the critical stretch.

Jaylin Walker scored 21 points while playing all 40 minutes and Philip Whittington added 18 and 13 rebounds to pace the Golden Flashes.

"They lost on Tuesday and came back and won," Kent State coach Rob Senderoff said. "That's what a really good team does."

Kent State led for most of the night and was up 61-56 midway through the second half when Massinburg, Buffalo's steady senior guard, buried two straight 3-pointers to ignite a 10-0 run by the Bulls.

But with the game still in doubt, Buffalo, which stunned Arizona in last year's NCAA Tournament, turned to its defense and put the clamps on Walker and the Golden Flashes, who made just two field goals in the final 4:17.

"We played probably 30 minutes of pretty good basketball," said Buffalo coach Nate Oats. "We struggled on offense a little bit and couldn't get much going. But I thought our defense and just our maturity and experience got us the win tonight."

Jeremy Harris was credited with a steal and dunked to put the Bulls up 80-75. On Kent State's next possession, Massinburg swiped the ball from Walker and dunked to push Buffalo's lead to seven. Massinburg followed with another steal and fed Harris for a layup to make it 84-75, sending a raucous Kent State crowd toward the exits and into the frosty winter weather.

"For 37 minutes, we played well enough to win, the last three minutes they made the plays you need to make to win the game," Senderoff said. "They made enough plays and we didn't make the ones you need to. We were right there."

Kent State got the start it needed, jumping to a 25-12 lead when Walker, who has a knack for making improbable shots, dropped an off-balance 3-pointer just before the 30-second shot clock expired.

But the Bulls picked up their defensive intensity, started finding their range and pulled within 44-43 at halftime.

Buffalo has been ranked in the AP Top 25 for 11 straight weeks, tying the MAC record set by Bowling Green (1961-62). The Bulls may drop next week, but will likely remain in the rankings.

Massinburg, Davonta Jordan and Dontay Caruthers took turns guarding Walker, who came in averaging 23.4 points per game. Walker had scored at least 30 in his previous two games, the first Kent State player to accomplish the feat since Anthony Grier in 1984.

Buffalo: Nothing comes easy in the MAC, especially on the road. But the Bulls rebounded from their 77-75 loss at Northern Illinois to stay on first-place Bowling Green's heels in the East.

Kent State: Walker has been carrying the scoring load for the Golden Flashes, but he went cold in the second half as Buffalo rotated three defenders on him.