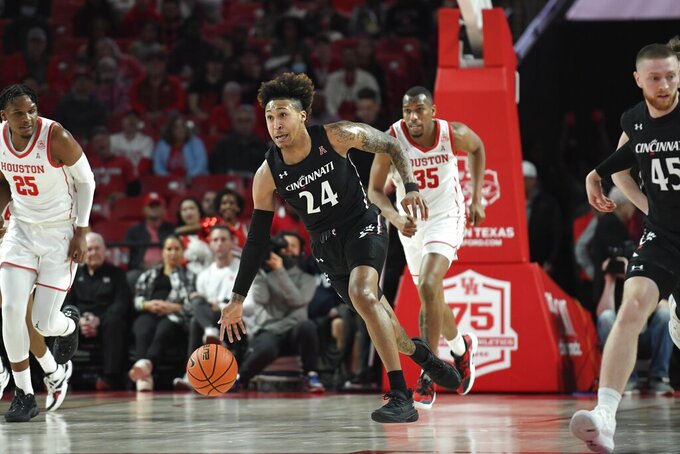 Cincinnati guard Jeremiah Davenport (24) brings the ball up against Houston during the first half of an NCAA college basketball game Tuesday, March 1, 2022, in Houston. (AP Photo/Justin Rex)

Sampson said he doesn’t take winning games or championships for granted because he knows how hard it is and how hard his team has worked.

“Nothing happens easily,” Sampson said. “It’s hard to win a game. That’s the disconnect that people who have never coached or played don’t understand — how hard it is to win a game. … The problem with success is the more you have, the more it is taken for granted.”

White scored his previous career high of 22 points on Feb. 6 in Cincinnati.

“He’s about as good as anybody in this league this year,” Cincinnati coach Wes Miller said of White. “We’ve had a hard time with him both times we’ve seen Houston. His ability to play both inside and out causes so many problems.”

Josh Carlton had 15 points and nine rebounds, and Kyler Edwards and Taze Moore each added 12 points for Houston, which shot 43% (23 for 54).

The Cougars won their fifth straight game and claimed the conference’s regular-season title for the third time in four seasons.

“This one hits a little different because we were counted out early in the season, even before conference even started,” White said of the conference title.

Houston outrebounded Cincinnati 41-28 and held an 18-6 advantage in second-chance points.

“I liked how we competed in the first 20 minutes,” Miller said. “I really liked it. Perfect? No. Some errors that were frustrating? Yes. I thought we competed our brains out for 20 minutes. I didn’t like the way we started the second half, and then, kind of in that hole again. We talked a lot about that, where you’re just kind of digging yourself into holes.”

The Cougars opened the second half by outscoring Cincinnati 22-9, capped by a three-point play by Edwards with nine minutes that gave Houston a 60-43 lead.

“I thought we generated some really good looks in the second half,” Miller said. “You look down, and you’re 7 for 25 from the field, 3 for 16 from 3 and 2 for 8 from the free-throw line. I thought we just couldn’t get a couple of them to drop.”

Houston: The Cougars held a 32-20 advantage in points in the paint. … Houston made 20 of 24 shots from the line. … The win helps the Cougars, who are looking to strengthen their resume heading into the NCAA Tournament.

Cincinnati: Travels to SMU on Thursday.