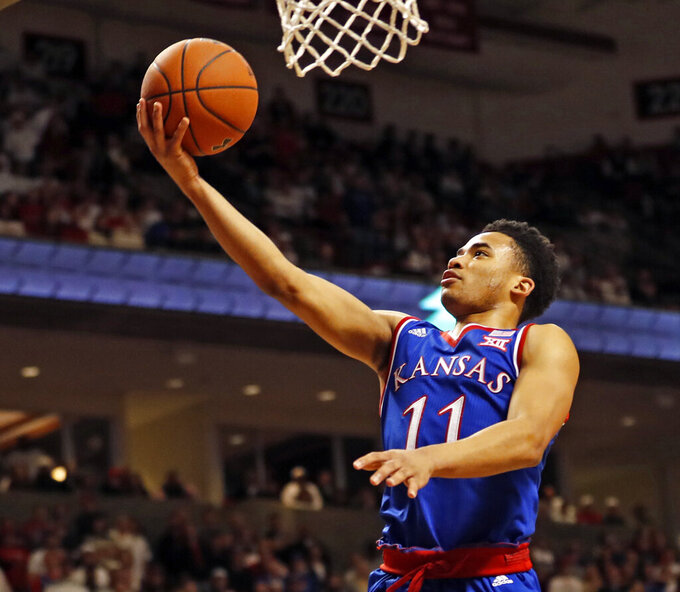 Kansas' Devon Dotson (11) lays up the ball during the first half of the team's NCAA college basketball game against Texas Tech on Saturday, Feb. 23, 2019, in Lubbock, Texas. (AP Photo/Brad Tollefson) 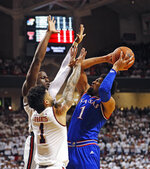 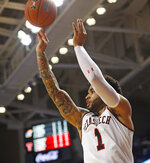 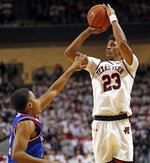 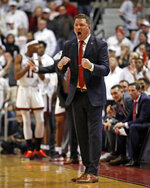 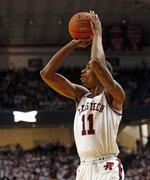 LUBBOCK, Texas (AP) — Jarrett Culver made a layup, a fast-break dunk and a 3-pointer in less than a minute early on for No. 14 Texas Tech.

The Red Raiders were just getting started in an overwhelming victory over No. 12 Kansas, whose Big 12 title streak could be in serious jeopardy with only four games to play.

"They got on us early when we were up there, and didn't look back," Culver said. "That's what we did tonight."

Culver, the hometown player for Texas Tech, scored 26 points and was one of six Red Raiders to make multiple 3-pointers in a 91-62 victory Saturday night that gave them sole possession of second place in the Big 12 standings.

That first 3-pointer by Culver started a string of five consecutive 3s — by five different players — to put the Red Raiders (22-5, 10-4 Big 12) ahead by double-digits to stay. When Davide Moretti made their eighth 3 with 6 1/2 minutes left in the first half, it was already 37-17 — the first time this season Kansas trailed by 20. Tech made 16 3-pointers overall and led by as many as 33 points.

"Obviously, Kansas didn't play their best game tonight, but I think you have to give us a lot of credit," coach Chris Beard said. "We were dialed in and we were really excited about the opportunity to play in a meaningful game like this in late February."

Texas Tech took over sole possession of second place in the Big 12, one game behind Kansas State (21-6, 11-3). The Red Raiders have won five in a row since their 16-point loss at Kansas three weeks ago when the Jayhawks led throughout.

Kansas (20-7, 9-5), which has won the last 14 Big 12 titles, plays its Sunflower State rival Monday night. The Jayhawks have to win then to avoid falling three games behind with only three games to play.

"Coach talked about the next game and getting ready for K-State," said Dedric Lawson, the only Kansas player in double figures with 14 points. "You can't get this one back, so we're just looking forward to the next one."

It was most lopsided Big 12 loss for the Jayhawks since an 86-53 loss at Oklahoma State on Feb. 7, 2000. That was more than three seasons before Bill Self became their coach.

"I think we did show up ready. I just think we played bad, and I think they played great. They were terrific," Self said. "They'd beat anybody in the country tonight."

The Red Raiders scored the game's first five points and never trailed. Kansas made a couple of quick layups to get to 5-4 before Culver's personal 8-0 run that sent the raucous crowd of 15,098 into a frenzy that prevailed pretty much all night.

Kansas: The Jayhawks' stranglehold on the Big 12 regular-season trophy absorbed a serious blow. It was their fifth consecutive road loss.

"They burned us, and after we got discombobulated, it didn't make any difference what we did," Self said.

"The great thing is tonight wasn't some kind of monumental big night for us. We've got a bunch of these left," said Beard, whose team was an NCAA Elite Eight team last season. "When you have the kind of season we're having, you earn the right to play in these kind of games in late February and March. We're just living in the moment and embracing the opportunity."

Mooney, the graduate transfer from South Dakota, was 3 of 4 on 3-pointers against Kansas and has made 16 of his last 30 from beyond the arc. Culver and Moretti also made three 3s against Jayhawks.