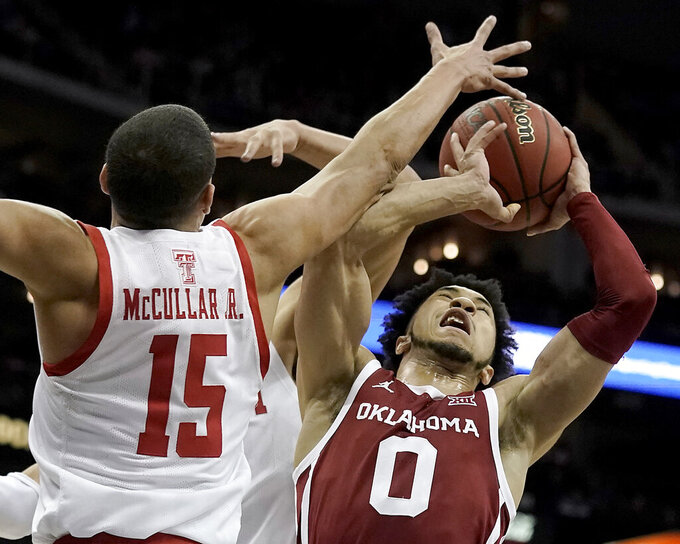 Oklahoma guard Jordan Goldwire (0) shoots under pressure from Texas Tech guard Kevin McCullar (15) during the first half of an NCAA college basketball game in the semifinal round of the Big 12 Conference tournament in Kansas City, Mo., Friday, March 11, 2022. (AP Photo/Charlie Riedel) 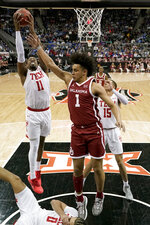 KANSAS CITY, Mo. (AP) — Mark Adams wasn't about to use any sort of flowery poetry to describe No. 14 Texas Tech's 56-55 victory over Oklahoma in the Big 12 Tournament semifinals Friday night, instead describing the entire 40 minutes as “ugly.”

Then again, it looks a lot prettier when you come out on top.

Clarence Nagolny scored his only points of the night on go-ahead foul shots with less than a minute left, and the Red Raiders held on through a frantic final stretch to advance to their second Big 12 title game. They will face sixth-ranked Kansas, a team they split their regular-season meetings with, for the championship on Saturday night.

“We've got a great group of guys,” said Adams, the Big 12's coach of the year. “It was an ugly game and Oklahoma had a lot to do with it, but at the end of the day, our guys pulled it out. They believed in each other and they fought so hard.”

Davion Warren and Kevin Obanor scored 11 points apiece to lead the third-seeded Red Raiders (24-8), who were leading 56-54 and Kevin McCullar missed a chance to put the game away when he didn’t make the front end of a one-and-one.

After a couple timeouts with less than 30 seconds to go, the Sooners got the ball to Jalen Hill, whose driving layup bounced off the glass and into a rebound scrum. A whistle was called on Nagolny, sending Jacob Groves to the line.

He made the first, but the second caromed into the backcourt, and Gibson turned the ball over while making a desperation drive to the basket before time expired and the Red Raiders spilled off the bench.

“I was just trying to get downhill and attack the defense,” Gibson said. “Obviously I tripped up and fell.”

Gibson finished with 16 points, Jordan Goldwire had 15 and Hill 13 for the Sooners (18-15), who are now left to sweat out Selection Sunday. Many believed they needed another win after upsetting third-ranked Baylor in the quarterfinals to feel secure, and they let it slip away in the closing seconds Friday night.

The Sooners roared into the semifinals off that upset of the Bears, while the Red Raiders were nearly perfect in a 72-41 win over Iowa State that set the school record for largest margin of victory in the Big 12 tourney.

Neither team seemed to carry a whole lot of that momentum into Friday night. Instead, they played a physical, slow-paced first half in which neither team easily gained separation. Texas Tech twice had its lead to eight before Oklahoma fought back, relying on 11 first-half points from Hill to keep it close.

It wasn't until Obanor hit back-to-back 3s with about 4 minutes to go that the Red Raiders began to pull away, and Adonis Arms knocked down a pair of free throws to send third-seeded Texas Tech into halftime with a 37-26 lead.

It eventually reached 40-26 before the Sooners mounted a charge.

Over a span of 7 1/2 scoreless minutes, Texas Tech missed eight shots, committed three turnovers and watched the shot-clock expire once. Oklahoma responded with a 14-0 run, which Gibson capped with a deep jumper from the top of the key to give give the Sooners a 45-44 lead — their first since it was 3-2 in the opening minutes.

Then it was Texas Tech's turn to answer: Gibson missed an ill-advised 3-pointer that turned into a runout and an easy basket for Warren, then Obanor and Warren scored twice more in transition to give the Red Raiders the lead back.

It was tied twice down the stretch, including 54-all heading into the final minute.

Oklahoma: Helped its NCAA Tournament hopes by beating Baylor, and their performance against the Red Raiders certainly won't hurt their cause. But while some of the advanced metrics favor the Sooners for the field of 68, their win-loss record alone will give the selection committee reason to debate.

Texas Tech: Lost to Oklahoma State in 2005 in its only other Big 12 title game appearance. That game was played at the old Kemper Arena in Kansas City, and featured a couple Hall of Fame coaches in Bob Knight and Eddie Sutton.

The Red Raiders meet the Jayhawks for the Big 12 title. Texas Tech won the matchup in Lubbock in early January and Kansas returned the favor in double overtime when the teams met at Allen Fieldhouse.