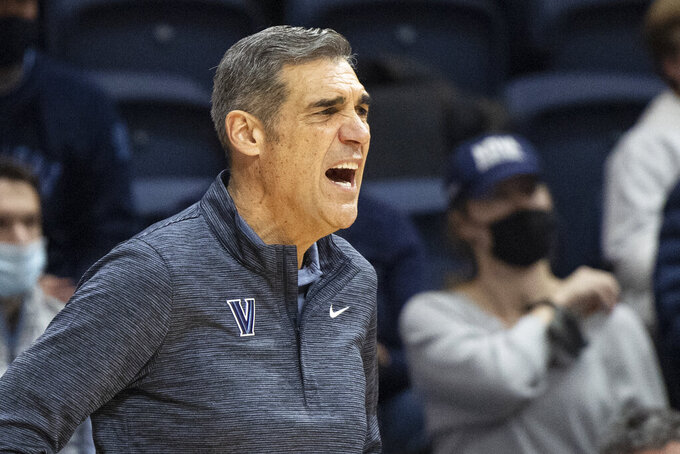 Villanova head coach Jay Wright shouts from the sideline during the second half of an NCAA college basketball game against DePaul, Tuesday, Jan. 25, 2022, in Villanova, Pa. (AP Photo/Laurence Kesterson)

VILLANOVA, Pa. (AP) — DePaul coach Tony Stubblefield heard the whopper of a number of losses in his program's 14-year losing streak to Villanova and, yes, actually wants it added to the next the scouting report.

“I didn't know that was the case,” Stubblefield said. “Yeah, it's something I'm definitely going to address in the future. You've to got to win the game.”

Maybe the next one.

Justin Moore scored 16 points, Collin Gillespie had 14 and No. 14 Villanova beat DePaul 67-43 on Tuesday night and kept the winning streak alive in the lopsided series.

Two national championships later, the Wildcats (15-5, 8-2) continue to reign as the class of the conference and shook off a sluggish start to cruise again at the Pavilion.

They had a 29-game Pavilion winning streak snapped last week in a loss to Marquette, knocking them down three spots in the AP Top 25 poll. Villanova rebounded with a win over the weekend against Georgetown, then used an 11-2 run to close the first half against DePaul to set the tone for the rout.

“Whether we won or lost, it was important to us to come back and get better," Moore said. “That's what we take pride in, coming back the next day, coming back getting better and having a great attitude.”

Moore, who averaged 17.3 points over his last eight games, scored 11 of Villanova’s first 14 points and hit three 3s in the first half to carry the Wildcats when baskets were at a premium.

Eric Dixon, who had 11 points and 10 rebounds, went up-and-under as the shot clock expired and Gillespie hit a 3 to send the Wildcats into the half with a 35-22 lead.

The Blue Demons usually play Nova tough and the last three games in the series played at the Pavilion were decided by five points or less. Villanova hit 11 3-pointers and pulled away in the second half.

“For us in a game like this, we have to come in and play extremely well to give ourselves a chance,” Stubblefield said.

Villanova has a 32-8 career record against DePaul; coach Jay Wright is a dazzling 24-2.

The Wildcats eight wins are tops in the Big East and a double-digit win against DePaul and the next game against a middling St. John’s team should start to give them a cushion in the standings. They open February with consecutive games against ranked teams, a small stretch that could go a long way toward deciding which team wins the Big East.

But Wright knows, with five ranked teams in the poll, the Big East is up for grabs.

“There's nowhere you're going in the league where it's not the most important sport on campus,” Wright said. “Guys that pick the schools are picking the schools because they're basketball schools, not because they went to a football game on the weekend and had a good time. They're going because they want to play basketball. And it makes this league really tough.”

It’s won’t be DePaul in the mix. Again. The Blue Demons did pick up an upset win this month against Seton Hall but still have lost eight of nine games. Javan Johnson led them with 16 points. DePaul missed 10 of 15 3-point attempts.

DePaul: The Blue Demons played again without leading scorer Javon Freeman-Liberty (21.1 points, 7.4 rebounds). He missed his third straight game with a groin injury. He scored 34 points in the first meeting this season, a 79-64 Villanova win at DePaul. Stubblefield said he did not know when Freeman-Liberty would return.

Villanova: The Wildcats could again feel right at home in the win column. They play St. John's next, a team they've beat 12 straight times at the Pavilion.