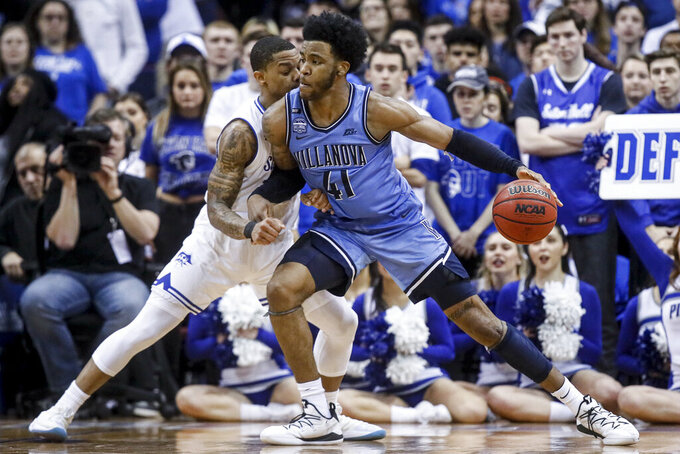 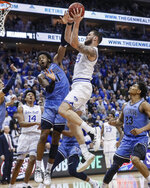 Saddiq Bey scored 20 points and the No. 14 Wildcats overcame some late free-throw shooting woes to prevent the Pirates from clinching the league title with a 79-77 victory on Wednesday night.

“It was a great college basketball game," Villanova coach Jay Wright said. “I think they’re one of the best teams in the country, I really do. We played Baylor, we played Kansas, I think they’re right up there with those guys. So therefore, that’s a hell of a road victory against a team that we have great respect for. So to come in here and do that, that’s great effort from our guys."

Wright and Villanova (23-7, 12-5) not only won on the road, they did it without getting a point from the bench and in front of a crowd of 16,863, a record for a Seton Hall game at the Prudential Center.

Justin Moore and Jermaine Samuels added 19 points apiece and Jeremiah Robinson-Earl had nine points and 11 rebounds as the Wildcats opened the possibility of the league having a three-way tie for first place.

Collin Gillespie added 12 points for Villanova, which kept the game close by missing seven free throws in the final 1:03.

“It’s basketball, man. We work on it," Wright said of the free-throw shooting. “We shoot. Sometimes they don’t go in and you’ve got to be able to do other things. You can’t be afraid to miss.”

The Pirates rallied from a 14-point second-half deficit and had a chance to tie the game with 5 seconds left, but Powell's 3-pointer bounced off the rim.

“This one was rough,” said Powell, a preseason All-America choice. “My last time here. I didn't go out the way we wanted to but we fought. We fought until we saw zeros on that clock."

Samuels made 1 of 2 free throws with 3 seconds to play. Seton Hall rushed the ball up the court but didn't get a shot off before the buzzer.

The win was the sixth in seven games for Villanova after a three-game losing streak.

The Pirates would not go away. Over the next five minutes, they made four 3-pointers, including two by Reynolds, and got within five points and eventually down to three and then the last two-point margin. They never tied the game.

Seton Hall: The Pirates head into Saturday with a one-game lead over Villanova and No. 11 Creighton (23-8, 12-5), which beat Georgetown. They will win the title if they win at Creighton. If they lose and Nova beats Georgetown, it will be a three-way tie. Creighton would be the top seed in the tournament based on its sweeping the Hall and splitting with Wildcats. Hall would end up No. 3 seed for the tournament and Nova second.

“I feel we play better when our backs are against the wall anyway," Powell said. “We always tend to make it harder for ourselves."

The Pirates honored Powell, McKnight, Gill and Asiah Avent before their final home game. Avent got his first career start and was pulled after 5 seconds.

Villanova: Ends the regular season at Georgetown on Saturday.

Seton Hall: Finishes the regular season at No. 11 Creighton on Saturday.

“We never look back," Mamukelashvili said. “We have faith. We have positivity. We have everything on this team. As coach said, he came in gave us a couple of good words and he said: 'Let's just go to Creighton and win it.'"