No. 14 Villanova rallies behind Samuels to beat UConn 61-55 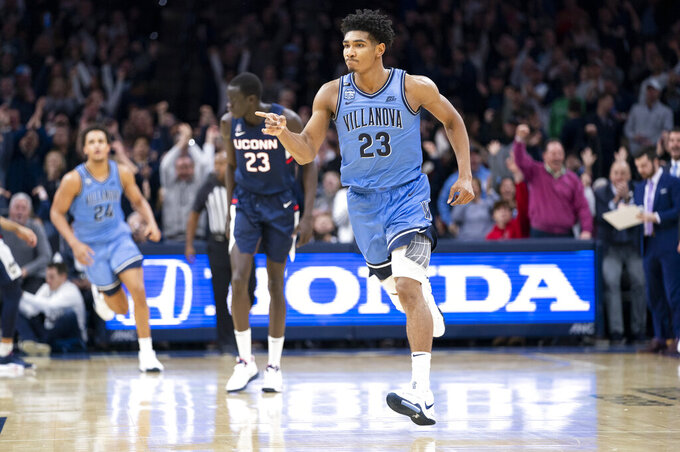 Villanova's Jermaine Samuels reacts to his basket during the second half of an NCAA college basketball game against Connecticut, Saturday, Jan. 18, 2020, in Philadelphia. Villanova won 61-55. (AP Photo/Chris Szagola) 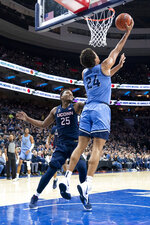 PHILADELPHIA (AP) — The "UConn! UConn! UConn!" shouts grew louder as Villanova fans were hushed with their team trailing, the thousands of Huskies die-hards that traveled to Philadelphia injecting the back-and-forth game with that ol' heated Big East feel.

"One of the things that brought back memories was when you could hear the UConn contingent chanting in our arena like it was their arena," Villanova coach Jay Wright said. “I forgot about that. They always travel well, they always bring people here.”

Seven years after the two teams last played in Philly, the Wildcats got another reminder of just how rugged it gets to play the Huskies. The teams will be intertwined for more than a game next season when UConn rejoins the Big East, and while the rivalry will be renewed, the balance of power has shifted: 'Nova is the top dog in the Big East and the former perennial power Huskies are the ones looking up.

"This isn't the way UConn's looked," coach Dan Hurley said. “We're on our way back.”

But it's not there yet.

Jermaine Samuels scored 19 points and made the decisive three-point play that pushed No. 14 Villanova ahead for good in a 61-55 victory over Connecticut on Saturday at the Wells Fargo Center, home of the NBA's 76ers and NHL's Flyers. Samuels converted a three-point play with 2:51 left for a 52-51 lead and then buried a 3 with 31 seconds remaining for a four-point lead that clinched another tight one for the Wildcats (14-3).

Samuels delivered in the clutch just as he did last month when he hit the winning 3 with 21 seconds left in the same building to knock off then-No. 1 Kansas.

"That's just my teammates having trust in me," Samuels said.

The Huskies (10-7) kept it close against their pending Big East rival and attacked the paint with authority to offset a miserable effort from 3-point range (2 of 15). Christian Vital fought through the lane and tossed in a layup that brought the Huskies within two with 24 seconds left. But a full-court press on Villanova came up empty and Jeremiah Robinson-Earl sank two free throws to secure the Wildcats' 10th win in 11 games.

Collin Gillespie scored 12 points and Villanova made 11 of 23 3-pointers.

Vital led the rebuilding Huskies with 13 points and eight rebounds.

"People better get us now, that's all," Hurley said. "It's coming."

Gillespie averaged 15.1 points and hit a team-high 38% of his 3s entering the game but was shut down in the first half, shooting 0 for 3. Once he started scoring, the Wildcats started rallying. Gillespie hit consecutive 3s and scored 10 straight points to help bring the Wildcats back from six points down to a 43-all tie with 7:43 left.

But Villanova's leading scorer, Saddiq Bey (15.4 points), went scoreless the rest of the game after having nine points in the first 7 minutes.

Bey had the ball knocked loose at midcourt and Vital snagged it for a driving layup and a 37-33 lead. The Huskies scored on 10 straight possessions — all 2-point buckets — until a missed 3 ended the streak, but with a six-point lead.

"Attitude is so important to us," Robinson-Early said. "Down by six, we could tank and call it quits or we could talk to teach other and get each other going."

UConn: The Huskies have lost four of five and don't catch a break with a game against AAC preseason favorite Houston on Tuesday.

Villanova: The Wildcats keep on rolling, but a home game Tuesday against Butler could prove who really is the team to beat in the Big East.

The game wrapped a three-season series that included a game in Connecticut and one at Madison Square Garden. The rivalry will be renewed on a more permanent basis next season when UConn leaves the American Athletic Conference to rejoin the Big East. The Huskies won national championships in 1999, 2004 and 2011 (and 2014 in the AAC), while the Wildcats won two more championships in 2016 and 2018 in UConn's absence.

"I kind of wish they weren't coming," Wright said. "I'm not looking for more games like that. But I think that what it's going to be. He's done a really good job there. They're going to be tough to reckon with in the future."

"The last two times they saw us we were a soft team, we were a bad team," Hurley said. "This is part of the process you're going through from where we've been to get to the level Villanova is at, which is where we expect to be."

UConn had 17 turnovers that led to 23 points for Villanova. Led by three each by Samuels and Robinson-Earl, the Wildcats had nine steals.

The Huskies play Thursday at Houston.

It should be a fantastic Big East showdown when the Wildcats host No. 5 Butler on Tuesday. The Bulldogs lost 79-66 to DePaul on Saturday.