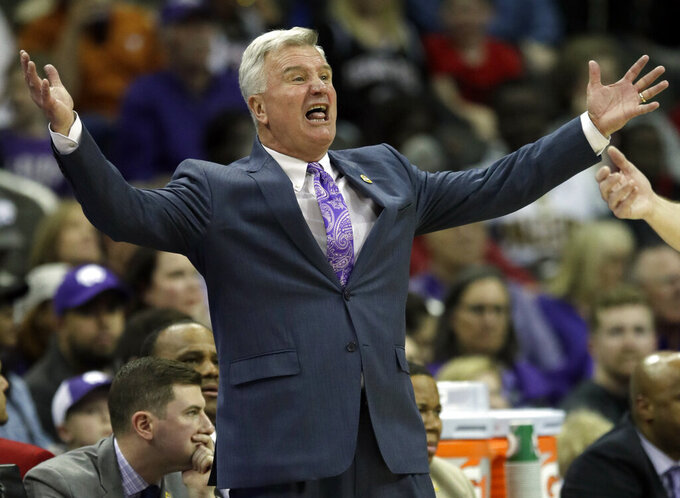 Kansas State head coach Bruce Weber yells at an official during the first half of an NCAA college basketball game against TCU in the quarterfinals of the Big 12 conference tournament in Kansas City, Mo., Thursday, March 14, 2019. (AP Photo/Orlin Wagner) 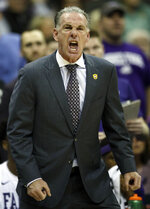 KANSAS CITY, Mo. (AP) — Kamau Stokes had just been hammered by TCU on the way to the basket, and Kansas State's senior guard was still lying face-down on the floor when a scratchy voice rang out inside Sprint Center.

So much for sympathy.

Stokes made the first and clanked the second, but the Wildcats secured the rebound and Stokes buried a 3-pointer to atone for the miss. The four-point play allowed Kansas State to edge ahead, and the regular-season champs never trailed down the stretch in a 70-61 victory over the Horned Frogs on Thursday in the quarterfinals of the Big 12 Tournament.

"Coach Weber always talks about toughness and I'm pretty sure he wanted me to get up," said Stokes, who finished with 11 points. "Just had to let the pain wear off a bit."

He'll have 24 hours to rest before a semifinal date with No. 5 seed Iowa State.

Xavier Sneed led all scorers with 19 points, none bigger than a 3-pointer as the shot clock sounded in the final minute. Barry Brown added 12 points and Makol Mawien had 10 for the Wildcats (25-7), who played without All-Big 12 forward Dean Wade in their first game as a No. 1-seed since 1977.

Wade watched the game from the sideline with a boot on his right foot, and probably had a hard time not leaping from his seat when Kansas State seized control in the second half.

"Just proud of our guys continuing to be resilient and fight," Weber said.

Desmond Bane had 16 points to lead the eighth-seeded Horned Frogs (20-13), who split with the Wildcats in the regular season. Alex Robinson added 12 points and Kevin Samuel had 11.

Now, coach Jamie Dixon's team must wait for Sunday to find out whether it has done enough to qualify for the NCAA Tournament. The Horned Frogs held on to beat Oklahoma State in the tournament's opening round, but they went just 7-11 against the league during the regular season.

TCU was in the flow right from the tip, perhaps having benefited from that down-to-the-wire win over the Cowboys. The Horned Frogs were hot from the 3-point arc and solid on defense, and soon they'd built a double-digit lead on the regular-season conference champs.

They also took a crowd tinted Kansas State purple right out of the game.

"We didn't have the right energy, the right mindset," Brown said. "I though the first 10 or 12 minutes we just coasted. I tried to express it to our guys that it wasn't going to be easy."

The Wildcats finally clawed back into the game, getting a big lift from Cartier Diarra, their backup guard who returned after missing several weeks with a hand injury. He slammed an alley-oop dunk to ignite the crowd, and Sneed's buzzer-beating 3 got the Wildcats within 34-32 at the break.

They used a 15-2 run to take their first lead midway through the second half.

The Wildcats' lead eventually reached 10 before TCU mounted a comeback of its own. But after Mebane's basket made it 55-52 with 5 1/2 minutes to go, Snead buried his third 3-pointer while getting fouled. He converted the free throw and gave Kansas State some breathing room again.

The Horned Frogs were never able to catch all the way up.

"They just seemed to get more physical, more aggressive on our drives, our penetration," Dixon said. "They were keeping us from getting a direct line to the basket, and they hit a couple of shots."

Kansas State coach Bruce Weber said Wade was unlikely to play this weekend, and would instead get treatment on his injured. Weber is hopeful the All-Big 12 forward is ready for the first round of the NCAA Tournament, but he refused to commit to it earlier this week.

TCU was likely out of the NCAA Tournament if it lost to Oklahoma State. Now, the question is whether a win over the Cowboys and a competitive loss to Kansas State is enough to get in.

Kansas State spent the first 10 minutes as if in a post-title malaise, and the last five minutes trying to hold on for dear life. In between, the Wildcats looked capable of playing with anyone.