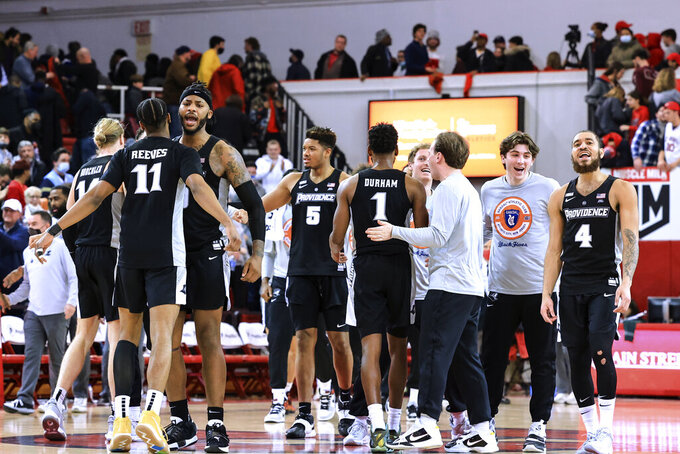 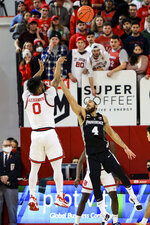 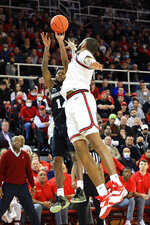 NEW YORK (AP) — In a stirring season that keeps gaining momentum, No. 15 Providence passed yet another test.

Jared Bynum scored 19 points off the bench and Al Durham made eight straight free throws in the final 27 seconds as the Friars held off St. John's 86-82 on Tuesday night for their sixth consecutive victory.

“I was proud of our players' resolve. Their mental and emotional toughness,” Providence coach Ed Cooley said. “We had to withstand a huge fury, and it's a credit to our maturity.”

Nate Watson scored 15 of his 16 points in the second half for the surprising Friars (19-2, 9-1 Big East), who hold a slim lead in the conference standings over Villanova. They have their highest ranking in six years and are 19-2 for the first time since the 1972-73 season, when Hall of Fame coach Dave Gavitt took Ernie DiGregorio, Marvin Barnes and Providence to its first Final Four.

Noah Horchler added 14 points and seven rebounds to help the Friars sweep the season series. Playing their second game in three days, they won for the 14th time in 15 tries overall.

In a nod to the New York win, Cooley likened Durham to a famous former Yankees closer.

“I love baseball and I'm a big Mariano Rivera fan. You know, when he came in the game it just was lights out, and to have somebody who can make free throws down the stretch like that in this kind of environment, I mean that's priceless,” Cooley said.

Posh Alexander had 29 points and 12 assists to spark the scuffling Red Storm (11-9, 3-6), both career highs for the sophomore guard. St. John's has lost six of eight.

“Posh took it to another level today. He was outstanding,” Cooley said. “I found myself watching him play. He was big-time today.”

But slumping Red Storm star Julian Champagnie scored only eight points on 4-of-11 shooting, held below 10 points for the fourth consecutive game after reaching double digits in 40 straight. He is 13 for 47 (28%) from the field and 2 for 18 on 3-pointers over the past four games.

In a game that got chippy at times, Champagnie missed almost nine minutes in the first half to get patched up with stitches for a cut above his right eye.

After trailing by 10 early in the second half, St. John's rallied behind Alexander and took a 74-72 lead on his cutting layup with 3:33 left.

But then Bynum, who was 4 for 5 from beyond the arc, drained a long 3-pointer and two free throws to put the Friars back in front by three as the Red Storm squandered several pivotal possessions with turnovers.

“We've got to get better at taking care of the ball,” Alexander said.

Providence extended the margin to six and Durham went 8 for 8 at the free throw line down the stretch to seal it.

“We’ve been in a lot of close games this year and we’ve got an older group, so we’ve got a lot of experience,” Bynum said.

Providence: A founding member of the Big East in 1979, Providence owns two conference tournament titles (1994, 2014) but has never won even a share of the regular-season crown. The veteran Friars, picked seventh in the preseason coaches poll, are threatening to change that. They started four graduate students and a senior Tuesday.

St. John's: It's been a disappointing season thus far for the Red Storm, who fell to 0-4 against Top 25 teams and 9-1 at Carnesecca Arena on campus.

“It's frustrating," coach Mike Anderson said, “because I thought this team would be a little further along.”

Providence forward Justin Minaya, the reigning Big East player of the week, was raised in nearby New Jersey and requested 15-20 tickets for family and friends, the Friars said. Sitting behind the Providence bench was his father Omar, former general manager of the New York Mets just a few miles away.

Omar Minaya grew up in Queens and rooted for powerhouse St. John's teams decades ago, so the chance to see his son play at Carnesecca Arena so close to home was exciting for the entire clan.

“The way we look at it is, win or lose, we feel like we've won already,” he said in a phone interview Monday night.

The younger Minaya, a graduate transfer from South Carolina, is a lockdown defender and do-it-all starter for the Friars who is emerging as a top contender for Big East defensive player of the year. He had eight points, four rebounds, two assists and two steals.

St. John’s: Visits longtime rival Georgetown on Thursday night at little McDonough Arena (capacity 2,500) on campus. The game was rescheduled from New Year's Day because of COVID-19. In the first matchup between the teams, Champagnie scored 25 points in an 88-69 win at Madison Square Garden on Jan. 16.