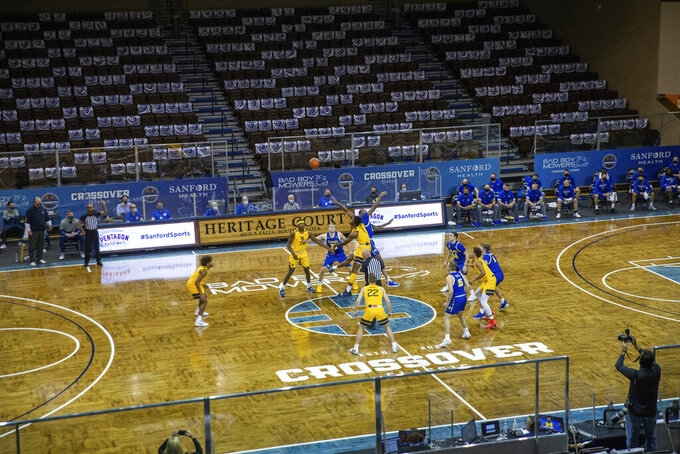 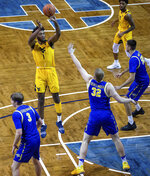 SIOUX FALLS, S.D. (AP) — West Virginia faced South Dakota State in its own backyard at the Bad Boys Mowers Crossover Classic just 50 miles from campus, but with no fans in the building due to COVID-19 restrictions, it felt like a neutral site for both teams.

McBride, selected to the Big 12 All-Freshman team last season, was 9 for 19 from the field and 4 for 4 from the free throw line for the Mountaineers in the opener. He added three assists and two steals.

“The main part of my game is pull-up jumpers and trying to get to the foul line,” McBride said. “I just relied on that and the shots went in today.”

West Virginia built the lead to 12 points in the second half when McNeil hit a 3-pointer. The Jackrabbits cut it to four with just under two minutes to play on Wilson’s 3-point play, but could get no closer. Freidel missed a three-pointer with just over a minute to play.

West Virginia led the nation last year in offensive rebounds at 15.5 per game. They had 17 against South Dakota State, but were outrebounded 41-39.

“The way they play, it leads to a lot of long rebounds because everything is so much penetration and kick and shooting threes,” West Virginia coach Bob Huggins said. “It’s a different kind of rebounding than what we’re used to.”

South Dakota State will face the loser of the Utah State vs. VCU game on Thursday night.

West Virginia’s long front line seemed to be too much for South Dakota State to overcome.

“We actually had to do a lot of scouting, and obviously we didn’t do a very good job on the last one,” Huggins said about scouting Texas A&M, who dropped out of the tournament due to COVID-19 complications, Northern Iowa, whose game was moved against West Virginia in the tournament, and then finally South Dakota State. “They’re a lot better than I think our guys thought they were.”

West Virginia’s Oscar Tshiebwe was named to the Preseason All-Big 12 Team. He picked up two fouls in the first four minutes and another early in the second half and was a non-factor all night, finishing with seven points and three rebounds. At halftime, Tshiebwe was just 1-for-1 from the field with two points and one rebound.

West Virginia advanced to the semifinals Thursday against VCU, an 85-69 winner over Utah State in the late game.