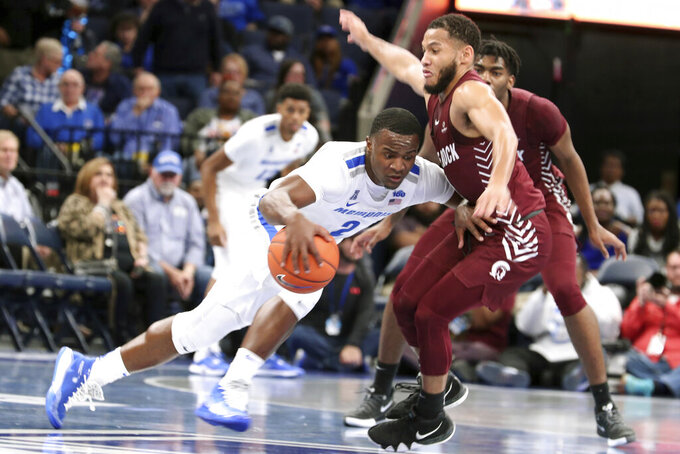 MEMPHIS, Tenn. (AP) — Memphis players said they were unaware before Wednesday night’s game that star freshman James Wiseman had been suspended 12 games by the NCAA.

There was another culprit for the No. 16 Tigers’ poor early play — a lack of respect for Arkansas-Little Rock — before Memphis escaped with a 68-58 win.

Precious Achiuwa had 16 points and 12 rebounds, and DJ Jeffries added 15 points — all in the first half — providing a spark for the lackadaisical Tigers (4-1).

The game was played only hours after the NCAA ruled Wiseman, the Tigers 7-foot-1 freshman and last season’s top recruit, ineligible for the next 11 games — he’d already sat out one — for receiving impermissible benefits from Memphis coach Penny Hardaway. Hardaway provide the family with $11,500 to help with moving expenses from Nashville to Memphis two years ago, before Hardaway became the Tigers’ coach. After moving to Memphis, Wiseman played for East High, where Hardaway coached.

The NCAA considered Hardaway a university booster because he donated $1 million to the university in 2008.

Wiseman watched the game from the bench.

“We were definitely glad to find out a number. We had been waiting on that,” Hardaway said.

Jeffries and Achiuwa both said they were unaware of the NCAA ruling.

“I haven’t actually looked at my phone in like four hours,” Achiuwa said, Jeffries nodding in agreement.

Hardaway said he didn’t talk about the situation with his team.

Hardaway attributed the slow start to the team’s disregard for the Trojans.

“I kind of got the feeling of how the locker room was before the game that these kids were taking Little Rock for granted,” Hardaway said. “There wasn’t the same energy.”

Markquis Nowell led the Trojans (3-2) with 16 points, while Ben Coupet Jr. added 12 points. Ruot Monyyong had 12 points and nine rebounds and Kamani Johnson finished with 10 points and 11 rebounds. Nowell also had 10 turnovers, representative of the sloppy play throughout the game.

“We had our chances,” Little Rock coach Darrell Walker said. “You think about it, Kamani at the rim 13 times and he misses 10 layups and doesn’t get fouled. There’s nothing the coach can do about that. Markquis turns the ball over 10 times. I told him they weren’t going to let him score all those points tonight. I told him he had to be a facilitator and a decoy.”

Memphis missed its first eight shots and by the midway point of the first half, the Tigers (4-1) were 3 of 13 from the field and had missed all five of its 3-pointers while committing eight turnovers.

The Tigers were unable to overcome the anemic start until less than five minutes left in the half, with Jeffries providing the spark with 15 points helping Memphis take a 28-23 lead at the break.

Little Rock was within 55-53 with about five minutes left, but Memphis outscored the Trojans 13-5 the rest of the way as the Trojans gave way to the Tigers depth.

“I don’t have all the weapons that Penny has,” Walker said. “He has a bunch of weapons, even coming off the bench. ... Right now, I don’t. I got a couple of freshmen and some guys hurt. My deck is not full, but I’m not making excuses.

“Penny’s deck is not full either.”

Little Rock: After jumping to an early 9-0 lead, the Trojans defense played well enough to cause problems for Memphis. Little Rock stayed close, but the visitors struggled from the foul line, going 13 of 24.

Memphis: Memphis was a mess to start the game, missing its first eight shots, some of them way off the mark. Four turnovers added to the early misery. After taking the lead late in the first half, the Tigers never relinquished the advantage in the second half, although Little Rock kept the game close.