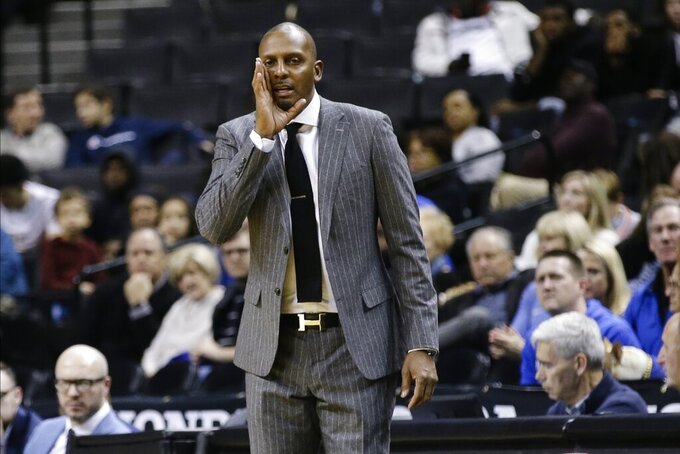 Memphis head coach Penny Hardaway calls to his team during the second half of an NCAA college basketball game against North Carolina State in the Barclays Classic, Thursday, Nov. 28, 2019, in New York. (AP Photo/Frank Franklin II)

“We’ve seen them grow up right before our eyes,” coach Penny Hardaway said. “I thought it was going to be around January. We’re not where we need to be but we’re growing. To see this in November is big.”

“It’s a loss but we want to build off our second half,” coach Kevin Keatts said. “The second half was way better than our first.”

Achiuwa made a jumper, and D.J. Jeffries converted a putback on Memphis’ next two possessions to extend the lead to seven, only for Bryce to respond with a jumper to cut it to 79-74.

Harris missed a floater in the lane, but the ball went off a N.C. State player. Johnson then drew a blocking foul on Ellis, and made both foul shots to cut it to 79-76.

Memphis dashed any thoughts about an upset when Harris converted a three-point play, and Alex Lomax stole the ball from Johnson.

“This is a part of growth,” Hardaway said. “The best is still yet to come for this young team. They’re starting to understand more now and I’m proud of that. They’re carrying over what we’re teaching to the games.”

The Thanksgiving matinee was the fourth straight game Wiseman sat out due to NCAA suspension. The NCAA had ruled earlier in the month Wiseman’s mother had accepted money from Hardaway in 2017, when the former NBA star was a high school and AAU coach. Wiseman played for Hardaway’s AAU team, and would later enroll at the school where the one-time NBA star coached. The NCAA also added three games to the suspension to make up for the three games Wiseman played for Memphis (Nov. 5 against South Carolina State, Nov. 8 against Illinois-Chicago, Nov. 12 against Oregon) while being ineligible.

Memphis challenged the NCAA’s initial ruling, but the NCAA Committee on Student-Athlete Reinstate announced Wednesday that the decision was upheld. Wiseman, the nation’s top-ranked recruit coming out of high school, and the centerpiece of Hardaway’s top-ranked recruiting class, can return Jan. 12 against South Florida.

Hardaway believes the suspension won’t negatively affect Wiseman, who had averaged 19.7 points, 10.7 rebounds, three blocks in 23.1 minutes in the three games. He shot 76.9% from the field, and 70.4% from the foul line. He is expected to be on the short list of players who could be the first overall pick in June’s NBA Draft.

“James is very smart,” said Hardaway, who noted Wiseman did not travel with the team. “He understands. He watches a lot of film. He’s a student of the game. I think he’ll hit the ground running when he comes back. He’s just that special because he’s willing to do whatever it takes.”