No. 17 Maryland scores final 7 points to win at Indiana 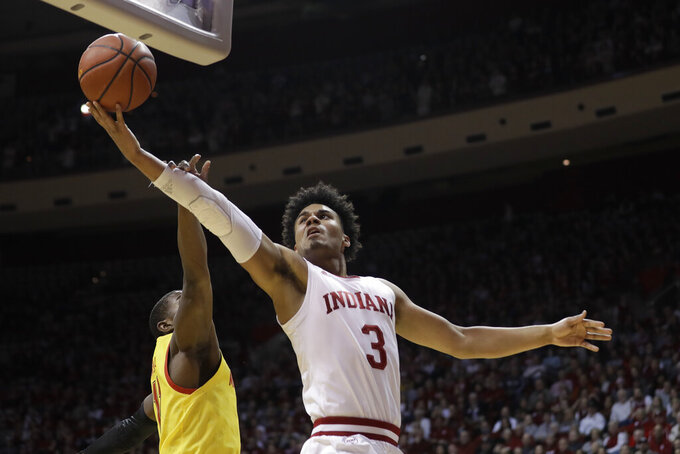 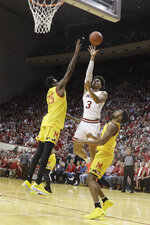 BLOOMINGTON, Ind. (AP) — Jalen Smith's first-half 3-point flurry helped stake Maryland to a double-digit lead. His ability to fight through Indiana's halftime adjustments kept the 17th-ranked Terrapins close in the second half. And then he finished with a flourish.

After catching a pass from Anthony Cowan Jr. in the post, the sophomore forward scored on a layup with 14.5 seconds left to cap an improbable last-minute comeback for the Terps, who beat the Hoosiers 77-76 on Sunday.

“He's walking around with a little bit more of a swagger between games. All of our guys are getting more confidence," coach Mark Turgeon said after the Terps overcame a six-point deficit in the final 68 seconds. “But Stix (Smith) has really taken it to a new level.”

It's made a difference.

His closing act was even more impressive.

Smith's layup with 1:08 to go started Maryland's closing run and his steal of the Hoosiers' ensuing inbound pass led to a 3 by Aaron Wiggins to make it a one-point game.

Following another defensive stop, Smith positioned himself perfectly for the go-ahead basket and after challenging Trayce Jackson-Davis's final shot for Indiana, a 2-footer, Smith still had the presence of mind to deflect away the rebound.

“I saw he was trying to get an offensive putback so I just tried to alter the way it bounced off the rim," he said. “Just so time could run off.”

Instead, Smith changed the ending.

“Really tough loss,” Hoosiers coach Archie Miller said. “I mean, one of the tougher losses I think you could probably imagine a locker room setting having for our group."

Green scored 16 points and Jackson-Davis had 13 to lead Indiana.

Miller grew up in Pennsylvania, an admirer of Kobe Bryant. His father, John, coached Bryant in the McDonald's All-Star Game.

So when Miller found out Bryant had been killed Sunday in a helicopter crash, it broke his heart.

“I mean, it's like that can't be real," said Miller, who's a year younger than Bryant was. “That's the most sick, stunning thing that's happened. You're talking about generations of kids right now that in their generation, it would have been like Michael Jordan passing away at 40 years old. It makes no sense."

Turgeon was not amused when Smith celebrated by waving his arms and taunting the Indiana crowd.

It drew a loud crescendo of boos and two postgame apologies.

Turgeon confronted Smith on the court.

“I want to apologize for Jalen, the way he acted after the game," Turgeon said, opening his news conference. “It's very uncharacteristic of Jalen. If you know him, he's a great kid but it's one of the best fan bases in the country. Top five. Jalen feels terrible about it, I feel terrible about it. I tried to stop it when I saw it, but it's not who he is. And I want to apologize to Archie, the team, Indiana Nation or whatever you call yourselves, Hoosier Nation, we're sorry for the way we acted."

Smith added: “I let my emotions get the best of me and I apologize to all their fans. Indiana has a great crowd."

Maryland: The Terrapins put on a 20-minute clinic moving the ball and knocking down 3s. They spent most of the second half scrambling to stay in it and when they got a chance to finally capitalize on a couple big miscues, they took advantage. If Smith & Co. continue improving the way Turgeon expects, they will only become a more dangerous team.

Indiana: While the disappointment could be seen across the faces of the players following the game, the question is how will the Hoosiers rebound? They've played hard and gritty all season and Miller knows his team must put the emotions of this loss behind them. He expects nothing less — even after they gave this one away despite committing a season-low six turnovers.

Maryland: Anthony Cowan Jr. had 18 points, Darryl Morsell finished with 10 points and six rebounds and Eric Ayala had six assists. ... After making six of their first nine 3s, the Terrapins wound up 12 of 29. ... Maryland pulled off its first season sweep and won at Assembly Hall for the first time since joining the Big Ten. They lost the previous meetings in Bloomington.

Indiana: Jackson-Davis and Justin Smith each had eight rebounds. ... Rob Phinisee finished with 10 points and seven assists and Jerome Hunter scored a season-high 12 points. ... Indiana went 9 of 19 on 3s and was outrebounded 29-22. ... The Hoosiers are 12-2 at home and 3-2 against AP Top 25 opponents.

Maryland hosts No. 19 on Thursday in the first of two straight home games.