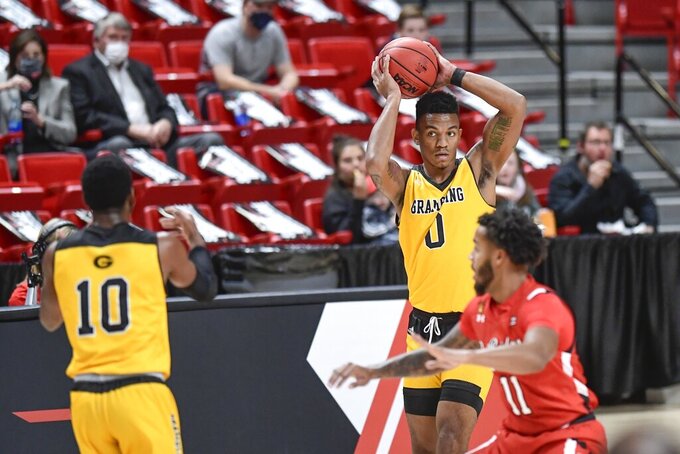 LUBBOCK, Texas (AP) — Kyler Edwards played in a national championship game as a freshman for No. 17 Texas Tech, started every game last season and now wants to be one of the best junior guards in the country.

“I’m right there with him. I want him to be in that category. I believe he can be, I believe he will be,” coach Chris Beard said. “He has the work ethic and talent to do it, but the stat sheet has to show iton a consistent basis.”

Edwards had his first double-double at Texas Tech with 13 points and 11 rebounds, and the Red Raiders overcame a sluggish start to pull away for an 81-40 win over Grambling State on Sunday.

The 6-foot-4 guard was 4-of-8 shooting, including two 3-pointers. He also had five assists, two blocked shots and two steals in his 26 minutes.

“I’ve been working hard all summer ... and it’s finally paying off,” said Edwards, who was coming off a season-high 14 points with four 3s two nights earlier against Troy.

The Red Raiders (4-1) never trailed after Edwards made a 3-pointer only 17 seconds into the game, but they then missed 12 of their next 13 shots. They also had a nearly five-minute stretch later in the first half when they missed five shots in a row and had four turnovers.

Mac McClung, Terrence Shannon Jr. and freshman Nimari Burnett all had 12 points for Texas Tech, while Jamarius Burton had 10. Burnett also had six steals in his 15 minutes of action.

Cameron Christon had 11 points, and was the only player in double figures for Grambling State (1-3).

McClung, the transfer guard from Georgetown who led the Red Raiders in scoring the first four games, was 0-for-5 shooting until his 3-pointer midway through the second half that made it 62-28. That was the last of seven points in a row he scored to wrap up a 16-0 run for Tech.

During that turnover-filled stretch by the Red Raiders late in the first half, Grambling got within 22-17 when Trevell Cunningham converted a turnover into a three-point play with 3:22 left. He had a steal off a bad pass by Marcus Santos-Silva, then drove and made a layup while being fouled.

But the Tigers never got any closer.

Shannon's jumper with 2:59 left started an 11-2 run to end the first half, a span when he had three field goals, including a mid-range fadeaway jumper to put the Red Raiders up 33-19 at the break.

Shannon was helped off the court with just over 11 minutes left after rolling his left ankle following contact from behind by a Grambling player. Coach Chris Beard said Shannon had X-rays and appeared to be OK.

While the Red Raiders had what Beard called “stale possessions” early, he said they did better executing against the zone defense as the game went on.

“You have to have five people on the same page. We had some really, really efficient possessions against the zone in the second half,” Bears said. “So that’s a great place to kind of start our journey this year playing against zones. ... I predict we’ll have a lot of success against zones this year.”

Grambling St.: The Tigers had 30 turnovers while taking only 37 shots. Their miscues led to 30 points for Texas Tech. After Christon's 3-pointer tied it at 3 more than 3 minutes into the game, Grambling State went more than 5 1/2 minutes before making another field goal.