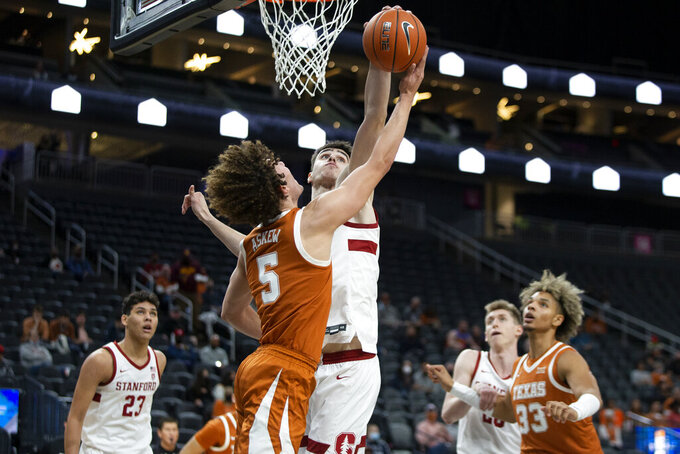 LAS VEGAS (AP) — The Texas Longhorns arrived in Las Vegas on Friday and got to see renowned magician David Copperfield before their Sunday showdown with Stanford in the Pac 12 Coast-to-Coast Challenge.

Then the 17th-ranked Longhorns performed a little magic of their own.

The Longhorns (8-2), who fell behind in the first half, used a 13-0 second-half run to seize control and pull away for their seventh victory in eight games. Timmy Allen and Dylan Disu each added 11 points.

“They hit us a little bit early, but we were able to control, get some back, get our own offensive rebounds and play to the game and play to the mistakes," Allen said. “As our process continues to go, just learning to play through mistakes, play with each other and just keep playing throughout the game.”

Texas’ depth has been one of its strengths, with six Longhorns averaging between 8.0 and 13.1 points per game.

Texas got 24 points from its reserves, with four Longhorns contributing on the score sheet.

“On the offensive end we had great balance,” Texas coach Chris Beard said. “On a night where maybe we didn’t shoot it well, we got a lot of good things done defensively. Our bench had great scoring tonight. We manufactured some points off of offensive rebounding, which is needed for us.”

Though the Cardinal won the battle on the glass, the Longhorns outscored Stanford in the paint, 32-24.

Texas, which is limiting teams to 53.6 points per game, held Stanford to its second-lowest scoring output of the season.

Harrison Ingram had 15 points and seven rebounds to lead Stanford (6-4).

“We lost to a very, very good basketball team, very talented,” Stanford coach Jerod Haase said. “I think they’ll be labeled an elite defensive team by the end of the year.”

Stanford committed 22 turnovers and the Longhorns were able to convert Cardinal miscues into 23 points.

Texas tried playing the bully early, playing a stringent defense to force four early turnovers, but could never push its lead past four points, late in the first half. The Longhorns were able to convert Stanford’s nine first-half turnovers into nine points.

Both teams demonstrated scoring lulls, which allowed Stanford to briefly grab a four-point lead midway through the first half. Texas closed the first half on a 21-10 run to lead 34-27 at halftime.

“I think a big turning point for us was closing out the first half really strong,” Allen said. “There was a good opportunity for us to create a lead and we did that. That was big for us, and then just going into the second half with the mindset of just dominating the paint. We knew a lot of their points in the first half came from second-chance points.”

While Haase still holds the Nevada Interscholastic Activities Association state record with 30 free throws made in a 1991 game during his time playing for South Lake Tahoe High School, it was a homecoming for Stanford’s Noah Taitz, who won four state titles at nationally prominent Bishop Gorman High.

Texas has been taking care of the ball, averaging just 10.6 turnovers per game through the first nine contests and leading the Big 12 in fewest turnovers. The Longhorns committed 13 Sunday.

Stanford continued its trend of outrebounding opponents in every game. The Cardinal came in posting a plus-9.4 margin, the 18th-best mark nationally, and outrebounded Texas, 33-29.