No. 18 Buffalo bulls past Central Michigan into MAC final 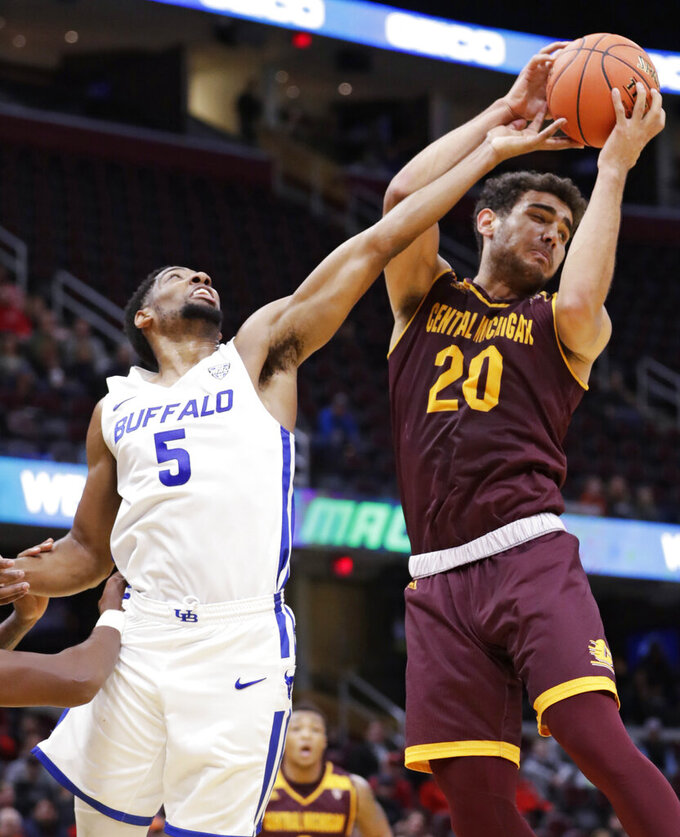 Central Michigan's Kevin McKay (20) grabs a rebound ahead of Buffalo's CJ Massinburg (5) during the first half of an NCAA college basketball game in the semifinals of the Mid-American Conference men's tournament Friday, March 15, 2019, in Cleveland. (AP Photo/Tony Dejak) 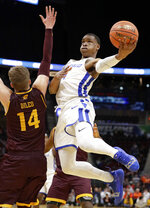 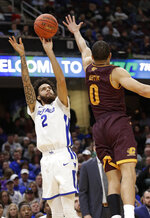 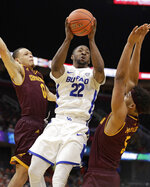 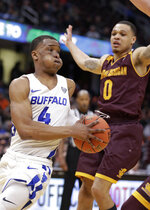 CLEVELAND (AP) — Buffalo's hopes for another MAC championship were dangling, and as coach Nate Oats huddled his team during a timeout in the fourth quarter he made a request.

The MAC's Player of the Year dropped a spinning layup, made four free throws in the final 32 seconds, and scored his team's final nine points as the No. 18 Bulls rallied in the second half for an 85-81 win over Central Michigan in the Mid-American Conference semifinals on Friday night.

Top-seeded Buffalo (30-3), which trailed for much of the second half, will play Bowling Green on Saturday for the MAC's automatic NCAA bid. The third-seeded Falcons, who have not been in the NCAA field since 1968, handed Buffalo one of its losses — 92-88 on Feb. 1.

If not for Massinburg, the Bulls would be going home already.

The senior guard finished with 21 points, nine rebounds and made all the big plays down the stretch.

"If we're down, he's got to get the ball like every time," Oats said. "I got a whole list of C.J. plays on my play card. And I ask him, 'What do you want to run?' And I gave him a couple options. I just told him you're going to get the ball in your hands."

Davonta Jordan added 16 for the Bulls, the defending champions trying to win the school's fourth tourney in five years.

Rob Montgomery scored 17 points to lead the Chippewas (23-11), who gave the Bulls everything they could handle.

Buffalo led 79-78 when Massinburg worked his way inside for a bucket. Larry Austin answered with a tough layup for Central Michigan, but the Chippewas had to foul and with several Central Michigan fans taunting him with chants of "Miss-in-burg," Massinburg calmly dropped his free throws to help the Bulls escape one of their closest games this season.

"I took on that role for this team for my brothers and for my coaching staff," Massinburg said. "I want to be a reliable person they can go to in desperation or when the game is on the line."

A team to keep in mind while filling out March Madness brackets next week, Buffalo won its 11th straight and became just the second MAC school to win 30 games in a season. The other was Kent State in 2002, a team that made it all the way to the Elite Eight.

This Buffalo squad may challenge that Kent State group as the best in MAC history before March is over.

"That Elite Eight team at Kent, that goes back to when I was like a really big basketball fan right out of college," said Oats, who signed a contract extension through 2024 on Thursday. "Just to be in the same conversation as a team that went to the Elite Eight is pretty incredible. It speaks a lot to our guys and what we've been able to do."

The Bulls, who beat Akron by 36 in the quarterfinals, had to fight for this one.

Making six of their first seven shots to open the second half, the Chippewas took a 61-53 lead and were outplaying the conference's best team in every phase. But Buffalo ratcheted up its defense and turned to Massinburg down the stretch to avoid the upset.

Austin and Shawn Roundtree scored 16 apiece for Central Michigan, which lost to Buffalo by 14 in the regular season.

"The best thing that I can say about Buffalo is they have four of five guys who could be player of the year in the conference," he said. "They keep coming at you. It's not just one guy."

Central Michigan: Played in its first MAC semifinal since 2015. The Chippewas won their last MAC tourney title in 2003, a squad led by center Chris Kaman. ... Lost to Buffalo in last year's quarterfinals.

Buffalo: Another title game. After losing at Bowling Green, the Bulls returned the favor and beat the Falcons 84-73 on March 8.