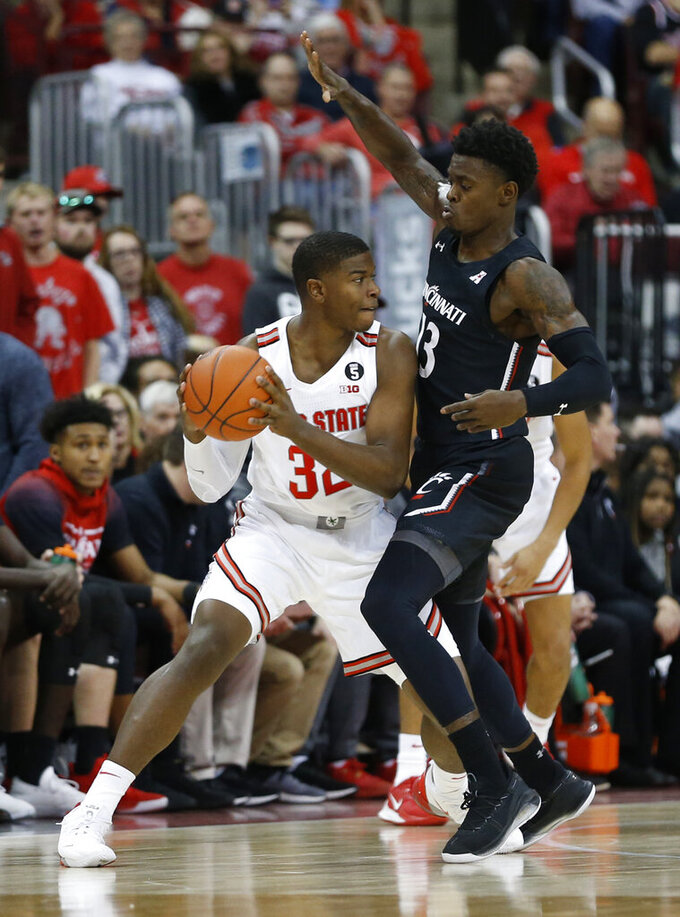 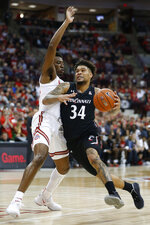 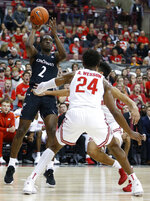 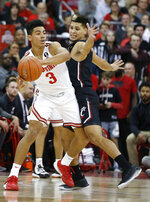 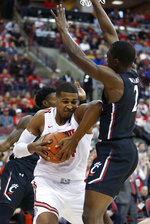 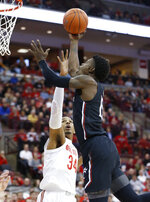 COLUMBUS, Ohio (AP) — Ohio State coach Chris Holtmann was so exasperated with his team's offense at halftime of Wednesday's season opener against Cincinnati that he tore up the game plan and started over from scratch.

The adjustments led to the 18th-ranked Buckeyes rallying from a seven-point first half deficit to turn back the visiting Bearcats 64-56 in a rare regular season match-up between the state's two largest universities.

"That was a good, old fashioned rock fight there," Holtmann said. "It was the most physical opening game I have ever been a part of. Give Cincinnati a lot of credit. I thought they disrupted everything we wanted to do game plan-wise.

"We could not run our offense so much so that we scrapped our offense at halftime," he said. "Our guys were great. They played off instincts and really responded. I'm sure it wasn't aesthetically pleasing to people, but I don't really care."

Junior forward Kyle Young had a career-high 14 points and 13 rebounds to pace Ohio State. He made 6 of 7 shots from the floor and the Buckeyes rallied to spoil John Brannen's Cincinnati coaching debut.

"I would just say effort is a big thing," said Young, who missed most of last season with a leg injury. "Coach preaches high energy, and I have to be a guy who goes in there and gets extra rebounds. We just trust that we're going to play well together."

Jarron Cumberland and Keith Williams each had 13 points to lead Cincinnati, which shot a dismal 33 percent from the floor and 19 percent from behind the three-point arc (4 of 21).

"I thought it looked like an early season game with two pretty good basketball teams," Brannen said. "The physicality of the game and the lack of offensive rhythm had a lot to do with it being the first game."

Cincinnati led 26-19 after a slow, rough first half. Ohio State failed to score for the first 7:45 until Young got a breakaway jam off Carton's outlet pass. Up to that point, Ohio State had missed its first seven shots from the floor as well as its first four free throws while committing five turnovers.

Buckeyes freshman E.J. Liddell scored off a feed from Duane Washington Jr., and Carton hit a pair of free throws to make it 59-53 with 2:16 left.

Cincinnati's Chris McNeal had a three-point play to cut it to 60-56 with 52 seconds left, and Ohio State's Washington and C.J. Walker each hit a pair of free throws to help the Buckeyes ride it out.

Ohio State: After a slow start, a good win for the Buckeyes, who were ranked in the preseason AP poll for the first time in five years.

Cincinnati: Brannen led Northern Kentucky to two NCAA Tournament appearances in the last three seasons before he was tapped to replace Mick Cronin, who left UC after 13 years to become the head coach at UCLA. The Bearcats stayed close most of the way but couldn't finish.

This was just the fourth men's basketball meeting between Ohio's two largest universities since 1962. It was Cincinnati's first trip to Columbus to play Ohio State since 1921. Ohio State won by an identical score at Cincinnati last year as part of a two-year home-and-home arrangement. The Buckeyes now lead the all-time series 8-4. It's unclear, however, when these two schools — located just 100 miles apart — will play again.

Ohio State senior forward Andre Wesson left with 6 minutes left after being poked in the right eye on a rebound attempt. He did not return.