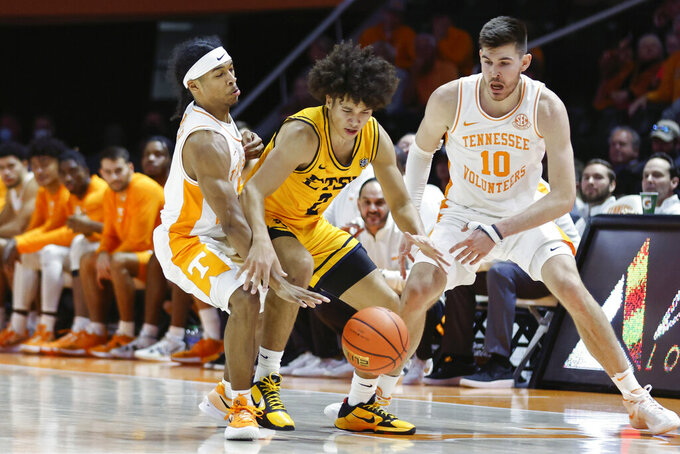 “I'm playing with a lot more confidence in my game,” said Nkamhoua. “Learning which shots to take is part of my growth here.”

Said Tennesse coach Rick Barnes: “Olivier has grown in a lot of different areas. He’s not close to scratching the surface of where he can be.”

First-year East Tennessee head coach Desmond Oliver, who had been a Vols assistant for six years, shared some pride in Nkamhoua's development.

“Coach Barnes is at his best with his veterans,” Oliver said. “When you get a junior and senior in the program, you really see them improve. Add Kennedy with him and he's hard to stop.”

Chandler, a freshman who has been impressive since the first day of the season, scored all of his points in the first half as Tennessee took a 46-23 lead. He added six assists, five rebounds and three steals.

“Kennedy Chandler is the best point guard I've seen in (Thompson-Boling Arena),” Oliver said. "He reminds me of a young Kyrie Irving.

“My mentality as a person is it's me against you. (In preparation) I wouldn't allow myself to feel that he's great. Then, I'm sitting there watching him hit 3s and drop dimes. ... Wow! Name a point guard that's better.”

John Fulkerson, in his first action of the season, had 10 rebounds to go with six points. Justin Powell had 11 points.

Jordan King scored 15 of his 20 points in the second half for the Buccaneers (0-2). David Sloan added 12 points and Ledarrius Brewer had 11.

“Our frontline got its butt kicked,” Oliver said. “But, that's a pretty good team that we played.”

East Tennessee State: The Bucs haven't beaten a ranked team since March 20, 1992, when they topped No. 10 Arizona in the first round of the NCAA Tournament.

Tennessee: Getting Fulkerson back on the floor was a big step in the right direction for the Vols. The senior big man missed the team's exhibition and season opener with a broken left thumb. The challenge is to get him into basketball shape in time for next weekend's showdowns.

“We wanted to get Fulky into game shape,” Barnes said. “We might have left him in there a little longer than we normally would. There was one time he asked to come out. We need to get him ready.”

Tennessee: A week off will be followed by a trip to the Mohegan Sun Resort in Uncasville, Connecticut, for the 2021 Basketball Hall of Fame Tip-Off. Saturday, Tennessee will take on No. 4 Villanova. Then, depending on Saturday's results, Tennessee will meet either No. 7 Purdue or No. 19 North Carolina on Sunday.