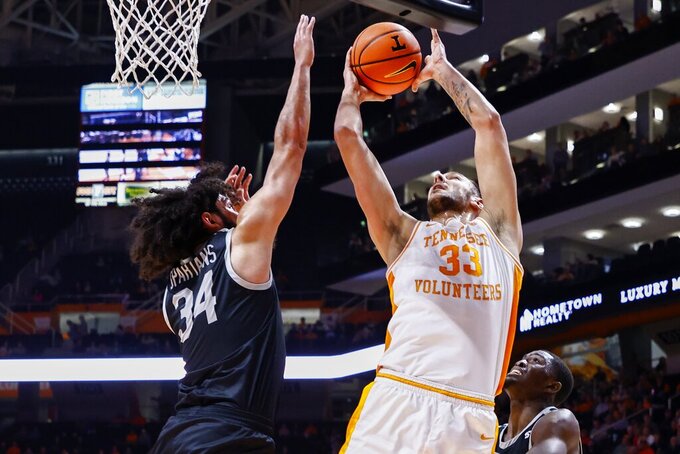 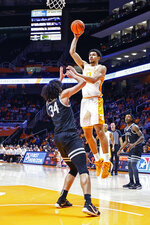 The Volunteers (8-2) scored the first 13 points of the game and weren't challenged the rest of the way.

Nkamhoua, a 6-foot-8 junior who also had eight rebounds, is working to establish himself as an inside threat within Tennessee's deep lineup. And he rose to the occasion.

“That's the most points (49) that our frontline scored all year,” Tennessee coach Rick Barnes said. "Olivier was really good. In practice, we worked with him and what he needed to do and he did it. We need the frontline to give us the balance.

“We need (6-10 freshman Brandon Huntley-Hatfield) and Olivier to give us a physical presence.”

Nkamhoua said Barnes "gave me a little bit of a challenge, adding, “the level of intensity that I played at today is the level I need to play at every day.”

Over the course of Tennessee's first 10 games, Nkamhoua's development has been significant.

“I realize how much harder I have to play,” he said. "How much more focus I have to put on defense and rebounding. I've also learned that I'm one of our inside presence players, along with (John Fulkerson). We have to be able to play with each other.”

Kennedy Chandler had 15 points and 10 assists to help the Vols, while Fulkerson contributed 12 points. Tennessee shot 56% from the field and 44% from the 3-point line.

“We worked on rebounding the ball, taking care of the ball and the speed of the game,” Barnes said. “We were efficient. We stayed within the framework of what we were trying to do.”

NOTES: Tennessee’s scouting report for USC Upstate was a little easier than most. That's because first-year Vols assistant coach Justin Gainey's son Jordan is a freshman starter who averages about 10 points a game for the Spartans. He managed just two points against the Vols. ... USC Upstate has been playing in Division I for 15 years and is still looking for its first NCAA Tournament bid. ... Heading into the game, freshman Kennedy Chandler scored or assisted on about 35% of Tennessee’s points.

USC Upstate: The Spartans still have three games before they begin Big South Conference competition against Radford on Jan. 5.

Tennessee: The Vols' season now gets “real,” with Memphis on Saturday, which is more than an in-state rivalry. Tennessee must prove its miserable shooting night in the loss to Texas Tech last week (27% from the field, 15% from 3) in New York’s Madison Square Garden was a fluke. Then, Tennessee will have its final pre-Southeastern Conference tuneup on Dec. 22 against No. 8 Arizona at home, followed by its SEC opener on Dec. 29 at No. 6 Alabama.

Tennessee: Takes on Memphis at Bridgestone Arena in Nashville.