No. 18 Villanova pulls away at Butler for 7th straight win 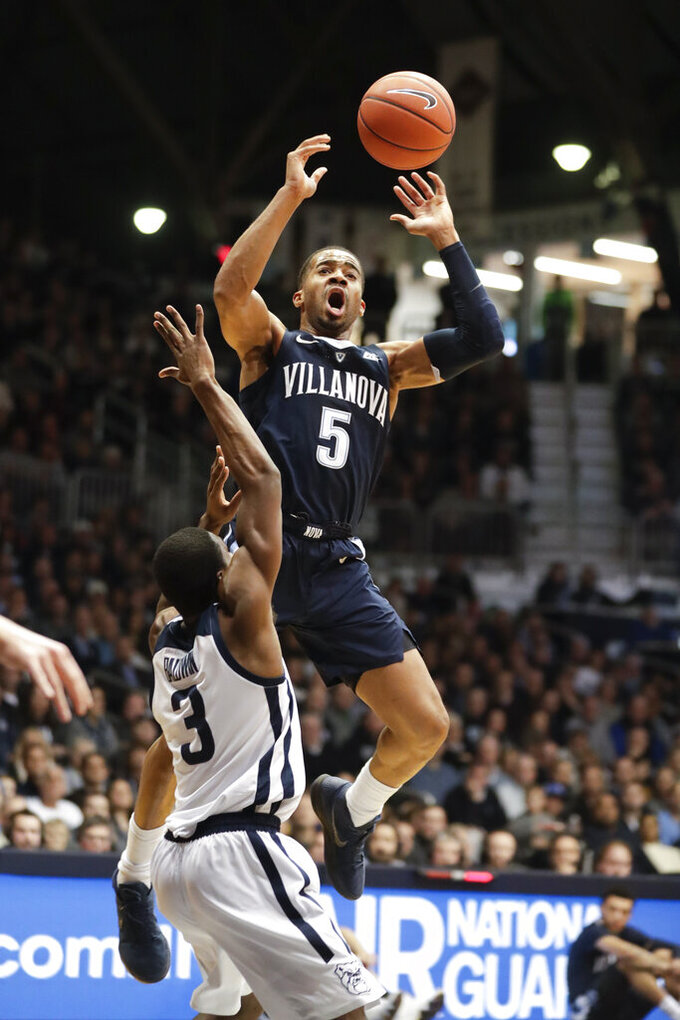 Villanova guard Phil Booth (5) is fouled as he shoots by Butler guard Kamar Baldwin (3) in the first half of an NCAA college basketball game in Indianapolis, Tuesday, Jan. 22, 2019. (AP Photo/Michael Conroy) 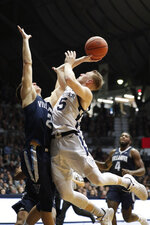 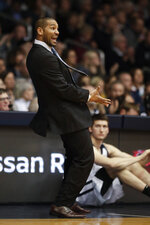 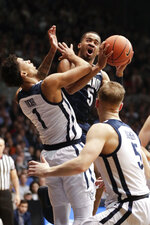 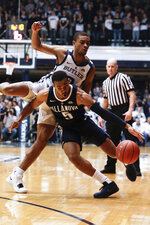 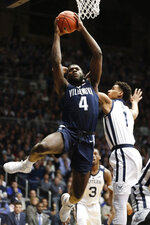 INDIANAPOLIS (AP) — Eric Paschall and Phil Booth have No. 18 Villanova rounding into form.

They are knocking down 3-pointers, getting teammates more involved and, of course, continuing to excel on defense. If the defending national champs keep playing this well, they just might make another deep NCAA Tournament run.

"He's done that in a number of games this year, tough games," coach Jay Wright said when asked about Paschall's strong start. "It sets the tone. You see that the first couple shots of the game and it makes a statement."

The kind of statement that will make everyone forget about a November loss to Furman and a December loss to Penn.

Now, the Wildcats (15-4, 6-0 Big East) have won seven straight and show no signs of slowing down. They even snapped a two-game losing streak at Hinkle Fieldhouse, and Villanova only needed three quick scoring flurries to put it away thanks to Paschall and Booth.

While Paschall was 8 of 16 from the field and 5 of 10 on 3s with five rebounds, Booth went 8 of 9 from the free-throw line, grabbed four rebounds and had five assists. Collin Gillespie finished with 11 points and Dhamir Crosby-Roundtree finished with 10 points and eight rebounds.

"You know when you see them coming, what type of game it's going to be," Bulldogs coach LaVall Jordan said. "I didn't think we played our best."

Butler's shooters did make it interesting early in a matchup of the conference's top two scoring defenses.

Villanova finally asserted itself when Booth accounted for half of the points in a 12-2 run that gave the Wildcats a 33-25 lead late in the first half.

It didn't last long. Villanova responded with four consecutive 3s — Saddiq Bey made the first with Gillespie knocking down the next three — to give Villanova a 55-44 lead.

The Bulldogs made one more charge, getting as close as 61-56, before Paschall's fifth 3 capped a 7-0 spurt that gave Villanova an insurmountable 68-56 cushion at the 6:23 mark.

"It (the balance) is very good for everybody," Paschall said. "We have a very talented team and it showed tonight. Everybody played well."

Villanova: The Wildcats rolling. With the 3s falling and a suffocating defense, they managed to get a road victory against the one conference team that has given them the most trouble over the last two seasons.

Butler: After losing four of five, the Bulldogs have showed some fight. They won back-to-back games heading into Tuesday and although they lost their second home game of the season, Butler still challenged Villanova despite having an off-night.

Villanova: After making 15 of 34 from beyond the arc Friday at Xavier, the Wildcats went 12 of 26 at Butler. ... Villanova made 12 of 18 from the free-throw line while Butler was 3 of 5. ... The Wildcats have won the rebounding battle in four straight conference games.

Butler: Kamar Baldwin and Jordan Tucker, the transfer from Duke, each scored 11 points. ... McDermott also had seven rebounds, while Thompson finished with four assists. ... Butler's shooting percentage dropped from 53.6 percent in the first half to 43.8 percent in the second half.

Villanova: "We played well against a very good team and we finally got a little balance offensively and that's helping us grow," Wright said. "We still have a lot of work to do but we're getting better."

Butler: "Today was Day 12 in a row for us so I thought that (fatigue) showed a little bit for us in the second half," Jordan said.

Butler: Can earn a season sweep Friday at Creighton.