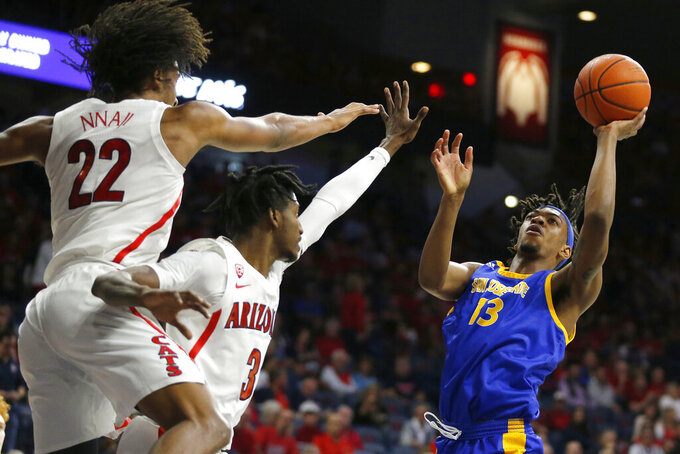 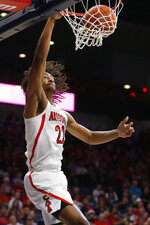 TUCSON, Ariz. (AP) — Zeke Nnaji got everywhere he wanted and did everything he needed in another ultra-efficient performance.

Arizona had a similar effect on San Jose State’s offense in the Wildcats’ most lopsided win in four years.

Nnaji scored 26 points, made all eight of his shots and grabbed 11 rebounds, helping No. 19 Arizona rout San Jose State 87-39 on Thursday night.

“He was clearly dominant,” Arizona coach Sean Miller said. “I thought he did a really good job against the zone in the middle. I thought his teammates found him, but he delivered.”

Nnaji didn’t get the same attention as Nico Mannion and Josh Green in Miller’s latest recruiting class, but has arguably been Arizona’s best player early in the season.

The 6-foot-11 freshman is a combined 25 for 31 from the floor through three games, was 10 of 12 on free throws against the Spartans and had six offensive rebounds.

Arizona’s defense was just as efficient.

The Wildcats (3-0) shut down the Spartans (1-2) defensively for their first winning margin of at least 50 points since beating Northern Arizona 92-37 in 2015.

Arizona held San Jose State to 23% shooting, including 2 for 18 from 3-point range, and used a massive run to build a 21-point halftime lead.

“It comes down to size and athleticism, speed and quickness at the level they’re playing at,” Spartans coach Jean Prioleau said. “It’s hard for us to assimilate that every day. We don’t have that size, speed and agility.”

Arizona rolled over Northern Arizona State in its opener and blew past Illinois in the second half when the freshman trio of Nnaji, Mannion and Green combined for 62 of the Wildcats’ 90 points.

San Jose State opened the season by ending a 21-game road losing streak with a 79-71 win at Hofstra. The Spartans followed that up with a 15-point loss to Portland in their home opener.

San Jose State got off to an awful start at McKale Center, turning it over four times and missing three shots first 2½ minutes. The Spartans only got marginally better the rest of the half, shooting 7 of 33, including 1 for 7 from the 3-point arc.

San Jose State also had no answer for Nnaji. The athletic big man bulled past and over the Spartans, hitting all five of his shots in the first half for 12 points and six rebounds.

“The way he’s scoring, a lot of it’s around the basket, but also look at the edge jumpers,” Arizona forward Ira Lee said. “He’s hitting 90% of his jumpers, finishing, playing hard, playing the game the right way.”

The Wildcats got sloppy to open the second half, turning it over five times in the first four minutes. San Jose State took advantage, using a 9-0 run to pull within 40-26.

The Spartans resumed missing shots — some at point-blank range — and Arizona raced away with a 21-2 run to go up 61-28.

“We actually learned a lot the second half of the game,” Prioleau said. “Defensively, we got what we wanted but couldn’t capitalize. We were playing a Top-25 team. Our guys got a good taste of that level of play.”

San Jose State had some nice stretches, particularly at the beginning of the second half, but needed to play a near-perfect game to have any chance against the Wildcats.

Arizona played like it should — except the turnovers starting the second half — against a team that won eight combined games the previous two seasons.

Arizona’s Devonaire Doutrive received a warm ovation from the McKale Center crowd upon entering the game early in the second half.

The sophomore guard sat the first two games of the season for violating team rules and had a strong return. Doutrive scored 12 points on 3-of-4 shooting and grabbed five rebounds in 12 minutes.

“It’s obvious he’s a much better player than he was a year ago and that’s to his credit,” Miller said.

Arizona has been superb at sharing the ball early in the season.

The Wildcats had 24 assists on 30 field goals and have at least 18 assists in three straight games for the first time since 2007.