No. 19 Butler holds off Xavier, loses Thompson to injury 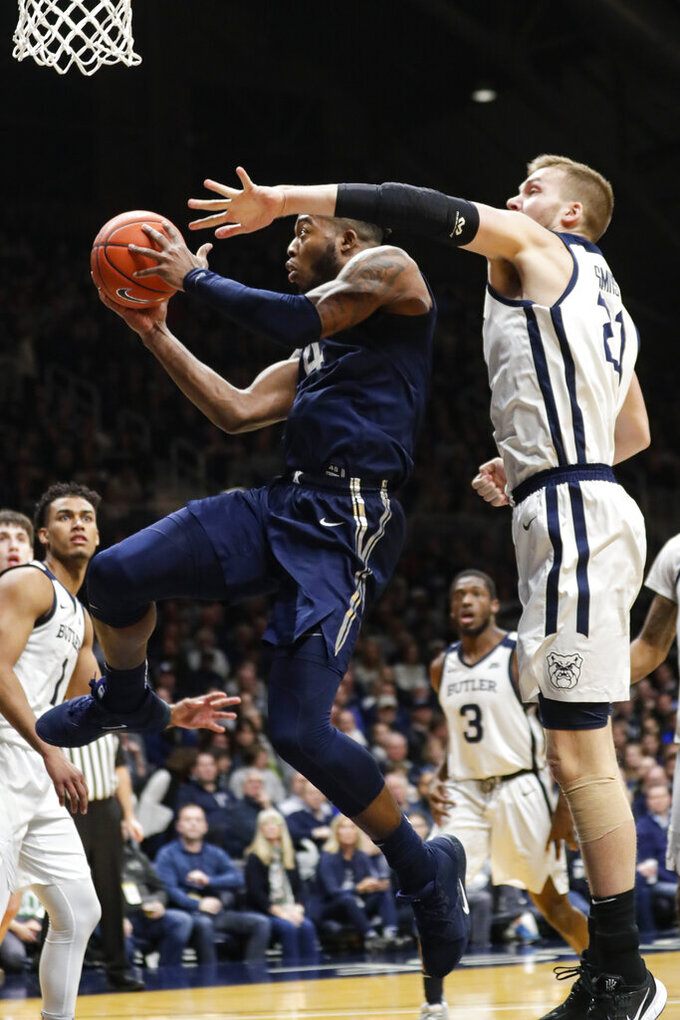 INDIANAPOLIS (AP) — Butler coach LaVall Jordan was looking at how his team could improve.

“We had good team conversation after the Marquette loss (Sunday) about where we can get better and a big part of that was the bench,” Jordan said. “Henry Baddley and our seniors really stepped up.”

Butler's bench outscored Xavier's 23-6 as the 19th-ranked Bulldogs beat the Musketeers 66-61 on Wednesday night. Jordan Tucker scored 10 points and Baddley added nine to lead the reserves. Among the starters, Sean McDermott scored a team-high 14 points and Kamar Baldwin had 11.

Baldwin, the Bulldogs' leading scorer, had two key baskets in the final 2:34.

“I told our guys before the game that Butler is a team that doesn't beat themselves,” Xavier coach Travis Steele said. “They don't turn the ball over much. They're solid defensively. We had seven turnovers in the first half and Butler got 10 points off that."

McDermott had six of Butler's 29 rebounds. Xavier also had 29 boards.

“He's able to battle with some of the bigger guys," Jordan said.

“He's got a great motor and he blocks out every single time,” Steele said.

Bulldogs guard Aaron Thompson took an elbow to the head and went to the floor with Butler leading 42-25. He left the game and did not return. Jordan said Thomspon is being evaluated and it wasn't clear whether he would have to go through concussion protocol.

Xavier followed the injury with an 11-0 spurt, delighting a vocal contingent of Musketeers fans. Butler’s Derrik Smits finally ended the drought with a basket.

Tucker’s back-to-back 3s helped Bulldogs rebuild their lead to 14 points at 57-43. Xavier closed the gap to 59-53 with 3:11 left. That’s as close as Xavier got until Marshall’s 3-pointer just before the buzzer.

“Leadership and perseverance are big words in our locker room," Jordan said. “When I was seeing about Aaron's injury, these guys are leading the huddle and seeing what happens next.”

Baddley, who was averaging 2.2 points entering the game, hit all three of his 3-point attempts in the first half.

Baldwin wasn't surprised, saying Baddley “shoots like that in practice.”

“We didn't shoot the ball well in the first half, but they got one of the best defenses in the entire country,” Steele said.

Leading 27-16, the Bulldogs went more than five minutes without scoring as the Musketeers closed the deficit to 27-23. Butler then scored the final five points of the half.

Xavier: Two games under .500 in Big East play, the Musketeers will need to finish strong to avoid missing the NCAA Tournament for the second consecutive year.

Butler: The Bulldogs' victory might be costly if they lose Thompson for any length of time. Butler did not play well when he missed three games earlier this season.

Smits, the son of former Indiana Pacers center Rik Smits, had to be helped off the floor with a knee injury with 5:16 left. Smits missed the first 10 games this season with a knee injury. Jordan said Smits, who comes off the bench, is being evaluated.