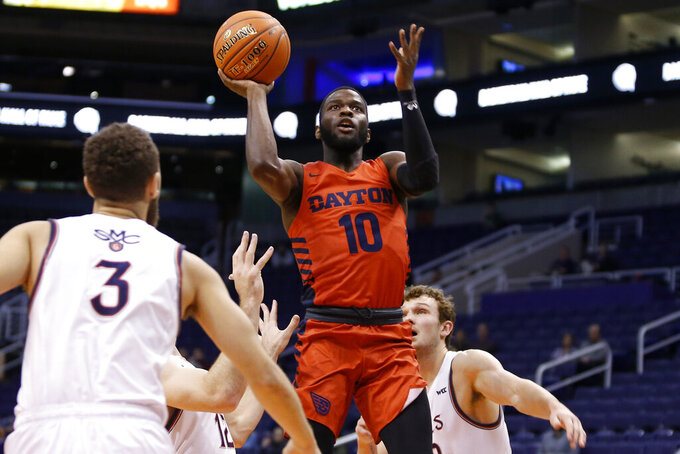 PHOENIX (AP) — Jalen Crutcher is nothing if not an obedient teammate.

“After I made my first shot, my teammates just kept telling me to keep shooting the ball, and that’s what I did,” Crtcher said.

He kept making them, too.

Crutcher had a had a season-high 21 points and tied a career high with five 3-pointers in No. 19 Dayton's 78-68 victory over Saint Mary’s on Sunday in the Jerry Colangelo Classic at Talking Stick Resort Arena.

“I think it was in my range because I was so hot,” Crutcher said of his long 3. “It was like a heat check for me."

As teammate Trey Landers quipped: “Jalen doesn’t have a range.”

Obi Toppin had 16 points and Landers had 15 points and eight rebounds for the Flyers (7-1). They built 24-point leads in each half before the Gaels (9-2) briefly closed.

Saint Mary’s closed to 76-68 on Zoriks’ layup with 50.3 seconds remaining but was never closer. Saint Mary's had won eight in a row.

“When you have ti going like Jalen had it going in the first half form the three-point line, that makes it easier for everybody else,” Dayton coach Anthony Grant said.

“He got us in a rhythm offensively. The ball moved, we shared it, made the extra pass, and we found a really good rhythm in the first half. That allowed us to get our defense set.”

“I told our team, when a team is hotting that well, you have to weather the storm, and you have to either the form mentally,” Saint Mary’s coach Randy Bennett said. “We didn’t do that. We started talking bad shots.

“I don’t think our best players showed up ready to play in a game that was at this level. You dudes better sow up in this game because their’s probably are. And a couple of them did.

Obi Toppin had a pair of emphatic dunks, but the highlight-reel play was a soft one-handed flip shot from the left baseline after taking a lob pass from Jalen Crutcher. Toppin was heading out of bounds as he caught the ball but still managed to make the basket. “I can just throw it anywhere at the rim and Obi will get it,” Crutcher said. “I have confidence in Obi to go get the ball.”

Saint Mary’s: The Gaels appear on track to win 25 games for the 10th time in the last 12 seasons. While not athletic enough to keep up with Dayton, their system-oriented style works well in the West Coast Conference, where they have finished at least second in 10 of the last 11 seasons.

Dayton: The versatile, athletic Flyers have the feel of a team that could go get into the second weekend of the NCAA Tournament. They have a difference-maker in Obi Toppin, capable shooters all over the floor, and are mindful of the ball — led NCAA Division I in field goal percentage, assists per game and assist-to-turnover ratio coming in.

Saint Mary’s plays at California before meeting Arizona State in what has become the Gaels’ December home away from home, the Talking Stick Resort Arena in downtown Phoenix, on Dec. 18. That game is part of the Basketball Hall of Fame showcase.

Dayton returns home to play Drake and North Texas before meeting No. 20 Colorado in the Chicago Legends Classic, which could its final opportunity for a resume-building victory. No other Atlantic-10 teams are ranked.