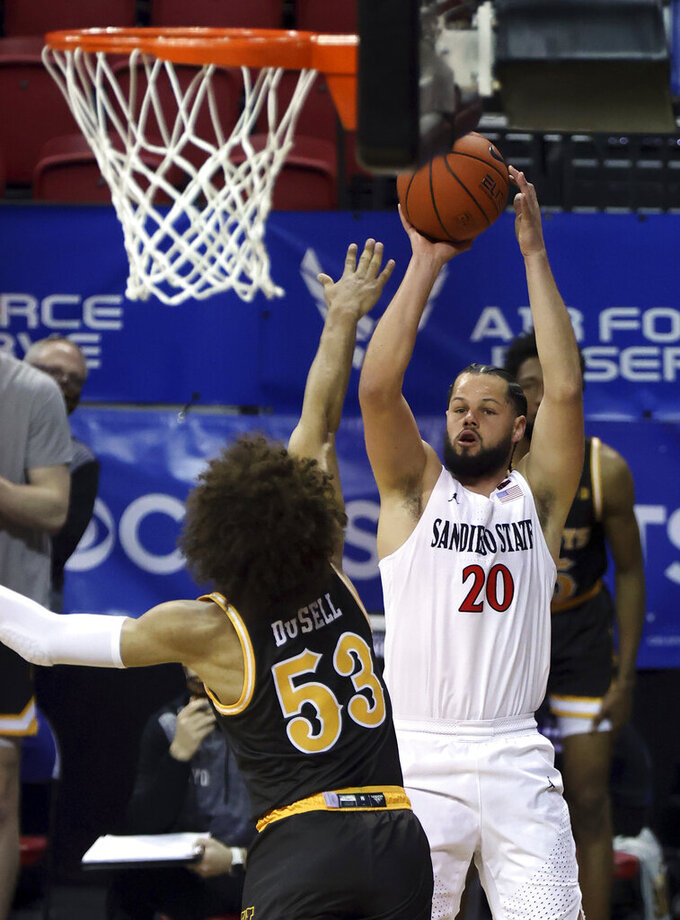 San Diego State guard Jordan Schakel (20) shoots over Wyoming guard Xavier DuSell (53) during the first half of an NCAA college basketball game in the quarterfinal round of the Mountain West Conference tournament Thursday, March 11, 2021, in Las Vegas. (AP Photo/Isaac Brekken) 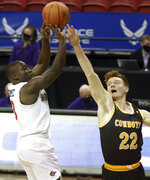 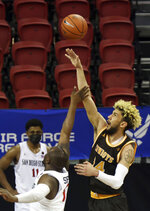 The Cowboys had a chance to tie it at the buzzer, but Marcus Williams’ long 3-pointer missed badly.

Jordan Schakel and Trey Pulliam each scored 15 points for the Aztecs (21-4), who will play Nevada on Friday.

“To play in less than a 24-hour turnaround and have a game plan set against us that gave us issues — they slowed the pace of the game down, they wouldn’t let us fast break, they ran shot clock, and then attacked us off a high-ball screen or isolation play — they did a great job,” San Diego State coach Brian Dutcher said. “I liked the toughness mentally and physically of my team, that we withstood a game like that, that we made timely plays down the stretch, and found a way to advance.”

“On such a quick turnaround, for our guys to execute the game plan, to trust in the coaching staff, it just says a lot,” Wyoming coach Jeff Linder said. “That game was a great barometer of where we’re at as a program. There’s no moral victories. The close isn’t good enough. With such a young group, I think people saw that we’re getting better. Right now we’re playing our best basketball at the right time. Unfortunately, we were one possession short.”

San Diego State, which came in boasting a defense that allowed 60.1 points per game while limiting teams to 39% shooting, allowed at least 66 points for just the seventh time this season.

The Aztecs, who have won 12 straight and are the top seed in the Mountain West tournament for the sixth time in school history, found themselves in a tussle with the scrappy Cowboys, much different than the teams' first two meetings. San Diego State won those January games by an average of 28.5 points while holding the Cowboys to 35.8% shooting.

Thursday was a different story.

Trailing 49-46 midway through the second half, the eighth-seeded Cowboys used five consecutive 3-pointers to stay within reach of San Diego State, which hit six straight free throws down the stretch.

The Cowboys, who employ a four-guard lineup to push the tempo, scored a tournament-record 59 first-half points in their first-round win over San Jose State behind 64.7% shooting. Knowing Wyoming’s tendency to fire from long range — it attempted 70 3-pointers combined in two regular-season meetings — the Aztecs used a full-court press and limited the Cowboys’ space at the perimeter.

“We expected to have our track shoes on for this game,” Gomez said. “Last time we played them they shot a lot of 3s. One thing that coach always says, when you let a team make 3s on you, you’re going to give them a chance, so guard the 3-point line.”

Despite the effective defensive game plan, Wyoming finished the first half 10 of 22 from the floor, including 5 of 11 from 3-point range. There were 11 ties and four lead changes in the first half.

“I think this was good practice for us,” Gomez said. “When we run into teams in the NCAA Tournament that like to hold the ball, throw it inside and stall time.”

The Aztecs, who are now 51-6 since the start of the 2019-20 campaign, are in the semifinals for the 14th consecutive season.

Wyoming: The Cowboys, the Mountain West’s leading 3-point shooting team after draining 239 shots from beyond the arc, finished the tournament 23 of 52 (44.2%) from 3-point range after hitting 11 of 27 on Wednesday against San Jose State and 12 of 25 against San Diego State. Wyoming’s 48% shooting from long range was the highest percentage allowed by the Aztecs all season.

San Diego State: The Aztecs are staring at an eight or nine seed for the NCAA Tournament at this point, but are hoping to move up to as high as a six seed if they can win the Mountain West tourney.

Wyoming: Season is likely over.

San Diego State: Prepares to face Nevada in the semifinals.