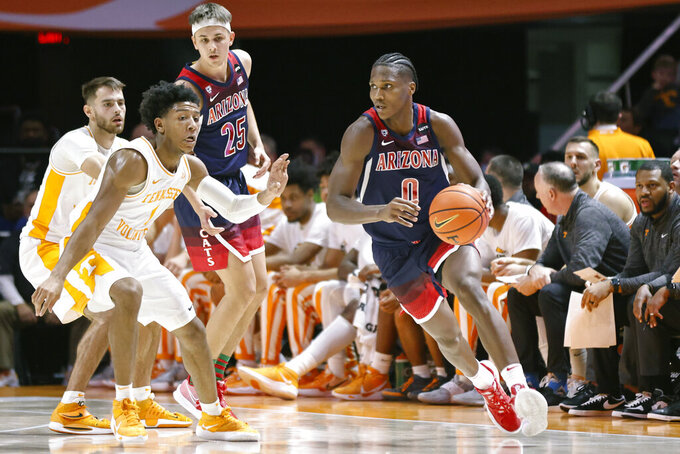 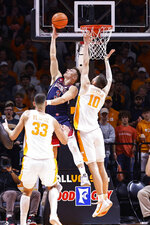 KNOXVILLE, Tenn. (AP) — No. 19 Tennessee used its experience to get the upper hand on No. 6 Arizona on Wednesday night.

Super senior big man John Fulkerson had 24 points and 10 rebounds to lead the Volunteers to a 77-73 win over the Wildcats.

“I’d love to see that Fulky every day,” Fulkerson said, referring to himself in the third person. “That’s how the game goes. Just keep being aggressive.”

With an offense based on the perimeter, Tennessee (9-2) took advantage of Arizona's spread-out defense by finding the 6-foot-9 Fulkerson inside. The Wildcats (11-1) were held 18 points below their season average.

“(Fulkerson) was the best player on the floor,” Arizona coach Tommy Lloyd said. “He drew 13 fouls, that's almost a record. Our plan was to make him score lots of points and he did.”

“(Fulkerson) came out 30 minutes before everyone else to shoot around,” Tennessee coach Rick Barnes said. “He was there last night when I left. He knows it's his last year.”

Bennedict Mathurin had 14 of his 28 points in the first half. He was the only Arizona starter to score in the first 20 minutes as Tennessee took a 34-21 lead. Kerr Kriisa scored 11 points for Arizona. Wildcat big men Christian Koloko and Azuolas Tubelis combined for just 10 points, all in the second half.

“We weren't able to get a lot of post touches,” Lloyd said. “At the end of the day, there's usually one recipe. The recipe is ‘toughen up.’”

“We knew (Arizona) would make a push,” Barnes said. “We knew they'd get back in it.”

Koloko's layup tied it at 62 with about five minutes left. With the game tied at 67, Fulkerson had a layup and two free throws to stretch the Tennessee lead to four.

“I felt like I couldn't be stopped,” Fulkerson said. “I give our coaches and teammates a lot of credit for putting me in a position to be successful.”

With the Vols up 71-69, Fulkerson grabbed an offensive rebound, scored and was fouled, putting Tennessee up by four.

Arizona: Respect was a big part of what the Wildcats were seeking in their pre-Pac-12 campaign. Wins over Michigan and Illinois gave some credibility. The trip to Tennessee was supposed to be another confidence builder heading into the heart of the schedule. Arizona came into the Tennessee game No. 1 in the country in scoring (91.0 points per game), scoring margin (+28.2) and assists per game (21.8).

Tennessee: With the tough Southeastern Conference season set to commence next week, Tennessee could have used the tuneup against Memphis that was scuttled by COVID-19 on Saturday. The Vols have prided themselves on asserting their will on defense. That, and 3-point shooting, will carry them through several tough games.

Arizona: The Wildcats journey to Knoxville was the start of the meat grinder portion of their schedule. After a break for Christmas, they return to action Thursday, Dec. 30 in Los Angeles for an early Pac-12 showdown with UCLA.

Tennessee: The SEC schedule starts with a bang Wednesday, Dec. 29 when they travel to face Alabama, a preseason favorite to finish high in the standings.