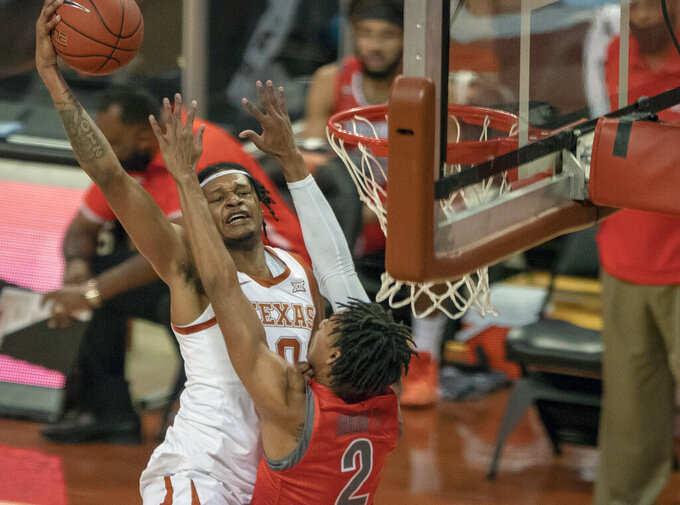 “We have to create our own energy,” guard Courtney Ramey said.

They did plenty of that. Ramey had 20 points and six assists and the Longhorns opened the season with a 91-55 victory over Texas-Rio Grande Valley in front of a few hundred fans, although announced attendance was 2,451.

Ramey was 7 of 11 from the field, hitting two 3-pointers. Several Texas players made significant contributions on offense and the Longhorns shot 57.4%. They had 16 fast-break points.

Texas guard Andrew Jones missed the game for precautionary reasons due to a cough. Jones missed most of the 2017-2018 and 2018-19 seasons after he was diagnosed with leukemia. He appeared in all 31 games last season.

“About two hours before the game started I got a call from our trainer,” Smart said. “The way it works now with the COVID protocols, if you have certain symptoms, then you have to be held out.”

With Jones out, Kai Jones moved into the starting lineup, hit all six of his shots and grabbed eight rebounds. Jones made fast-break alley oop dunks for consecutive baskets in the first half.

“Something that coaches emphasize a lot to me us just run the floor as hard as I can,” Jones said.

Said Smart, “A lot of people don’t know this guy was a track star before basketball kind of became his main sport.”

The Vaqueros missed 16 of their first 17 shots, falling behind 17-4. But they competed nearly evenly for the rest of the half, using a 10-0 push to trail 45-29 at the break. Quinton Johnson scored the first five points of the run. Johnson led UTRGV with 13 points. The Vaqueros shot only 26.1%.

“I was proud of my guys,” coach Lew Hill said. “I don’t think we played the smartest game, but our kids showed a little fight, which I was glad to see.”

Texas-Rio Grande Valley: The Vaqueros, 14-16 last season, are picked by Western Athletic Conference coaches to finish third in the nine-team league. They have five returning players who started 10 or more games. Senior guard Javon Levi ranked second nationally in assists per game last season (7.96) and averaged 11.4 points. But Levi produced two points and no assists against Texas on a poor shooting night for UTRGV.

Texas: Coach Shaka Smart has 12 scholarship players back from last season. He has nine who were ranked among the top 60 nationally in their recruiting classes, including freshman Brown. Smart says that at times in the past he has deployed too many players. He wants to develop a manageable rotation. Smart used nine of his 11 available players.

The Longhorns should remain safely ranked.

In addition to not having Andrew Jones, the Longhorns were without guard Jase Febres, who underwent knee surgery in March. Febres started 23 games last season, averaging 9.3 points while shooting 3-pointers with 37.4% accuracy. He has been cleared for non-contact drills.

Texas faces Davidson on Monday in Asheville, North Carolina, as part of the relocated Maui Invitational.