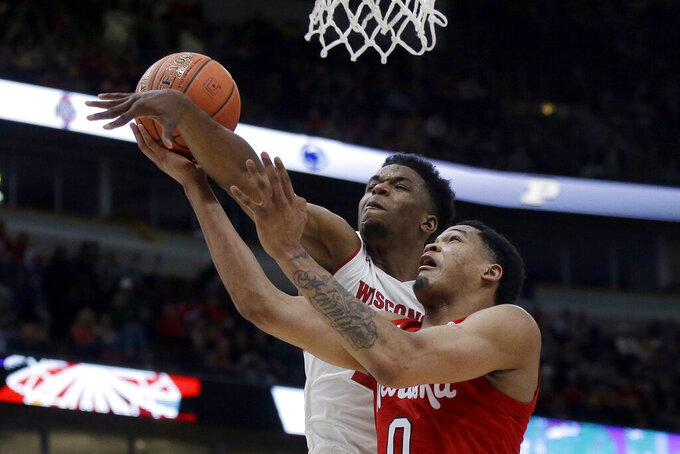 Nebraska's James Palmer Jr. (0) gets fouled by Wisconsin's Khalil Iverson during the second half of an NCAA college basketball game in the quarterfinals of the Big Ten Conference tournament, Friday, March 15, 2019, in Chicago. (AP Photo/Kiichiro Sato) 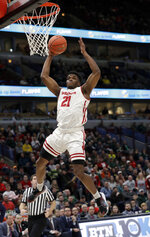 CHICAGO (AP) — With every clutch play by Nate Reuvers and company, Wisconsin showed it's much more than just Ethan Happ.

Khalil Iverson also scored 14 points as the Badgers (23-9) won for the sixth time in seven games despite a shaky performance by their leading scorer and rebounder. The 6-foot-10 Happ, who was averaging 17.8 points and 10.4 rebounds coming into the tourney, had a season-low four points and committed seven of his team's 17 turnovers.

"I didn't play well, obviously," Happ said. "There was definitely credit to Nebraska."

Reuvers, Iverson, Aleem Ford and Brad Davison stepped up to help make up for Happ's tough day. Ford and Davison each had 11 points.

"There's been a lot of games where he's carried us and today we kind of had to carry him," Davison said. "That won't happen two games in a row, so we're excited for him and for our team coming back tomorrow."

Next up for the Badgers is No. 6 Michigan State on Saturday. The top-seeded Spartans advanced with a 77-70 victory over Ohio State.

Nebraska (18-16) fell just short in its bid for a third win in three days. The Cornhuskers had a six-man rotation because of injuries and backup guard Nana Akenten's suspension, and it looked as if their lack of depth caught up to them in the final moments.

"We fought to the end. That's basically it," Watson said. "The guys all fought for each other and stuck together no matter what."

Watson, Palmer and Roby each played the entire game. Watson and Palmer played every minute of the Cornhuskers' stay in the conference tourney.

Nebraska was down just 57-55 when Trice connected from long range with 58 seconds left. After Watson missed a 3 on the other end, Davison made two free throws to make it 62-55 with 39 seconds remaining.

Davison made two more foul shots and Trice also hit two from the line to help Wisconsin close out the win. The Badgers made 11 of 12 free throws for the game, while the Cornhuskers went 6 for 8.

"We had a lot of guys come in and contribute," Iverson said.

Nebraska trailed by as many as 13, but got back into the game with a 13-2 run spanning halftime. Watson closed the first half with eight straight points on two 3s and a driving layup, and Roby's 3 trimmed Wisconsin's lead to 36-34 with 17:58 remaining.

After the Cornhuskers went in front for the first time on Palmer's layup with 10:18 left, Reuvers got the lead back for the Badgers when he banked in a 3 from the top of the key. The 6-foot-11 Reuvers grinned as ran back down the court to play defense.

Miles is 115-113 in seven seasons with the Cornhuskers, raising questions about his job security. Athletic director Bill Moos said his evaluation of the program would end once the season is over. The Cornhuskers will find out Sunday if they receive an invitation to the NIT.

"That's out of my hands," Miles said when asked if he had earned more time at the school.

Nebraska: Palmer led the way as Nebraska opened the conference tournament with victories over Rutgers and No. 21 Maryland. But the Cornhuskers looked a little tired down the stretch against Wisconsin, shooting 33.3 percent (12 for 36) from the field in the second half.

Wisconsin: It was ugly, but the Badgers found a way. While Happ struggled offensively, he grabbed seven rebounds to help his team to a 36-30 advantage on the glass.

Nebraska also played in the NIT last season, losing to Mississippi State in the first round.

Wisconsin lost 67-59 to Michigan State on Feb. 12 in their only meeting this season.