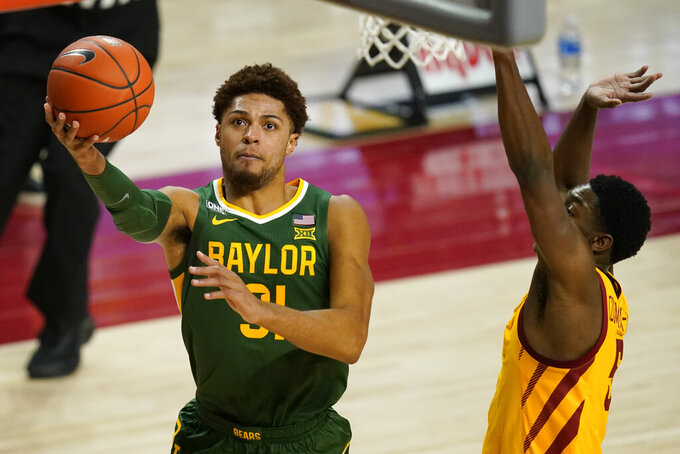 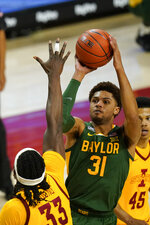 Jared Butler scored 21 points to lead four Bears in double figures as they earned their narrowest victory this season.

“It's been a long time since we played some stiff competition,” Butler said. “We said in the locker room, these games make basketball fun.”

Iowa State owned a 55-53 lead midway through the second half before Baylor's 13-0 run. Butler hit a 3-pointer from the right corner for a 63-55 lead with 7:31 remaining and made three key free throws in the final 3 minutes after Iowa State pulled within 66-61.

“I think everyone played their role extremely well when they came in,” Butler said.

Baylor buried its past opponents with a barrage of 3-pointers, hitting 45.9% from long range and averaging 11.9 3s per game.

The Bears missed all six of their 3-point attempts in the first half Saturday and finished 4 of 19 (21.2%) from deep for the game.

“Welcome to Big 12 play,” Baylor coach Scott Drew said. “That means you're not going to shoot well every night and you've got to rebound and play defense.”

Mitchell helped Baylor maintain a 36-32 lead at the break, scoring 10 points and making three steals, but he was limited after picking up his fourth foul with 8:54 left in the second.

Butler and Teague ended Baylor's 3-point drought by converting from behind the arc on consecutive possessions early in the second half, helping the Bears build a 44-34 lead.

“It's a grind. I don't know how else to put it,” Butler said of the Bears' early struggles. “My 3 kind of came down and my guys found me.”

Baylor coaches and players expressed mixed feelings about playing in a nearly empty Hilton Coliseum. The Cyclones' home arena is usually packed but was limited to 1,318 fans because of COVID concerns.

The Bears would have liked a bigger crowd but were happy for a chance to compete.

“Definitely different walking out,” Drew said. “Normally, you get off the bus and fans are waiting. But that's where you're blessed you're able to play a game.”

Baylor, preseason favorite to win the Big 12 title, looked less-than dominant against an Iowa State team that had lost its first two league games. The Bears began this weekend as the only team nationally to win every game by at least 13 points.

Baylor will be a heavy favorite in its next two games against Baylor and at TCU, before hosting No. 9 West Virginia, visiting No. 13 Texas Tech and returning home to play No. 3 Kansas.

Iowa State plays three of its next four games against teams ranked among the top 25.