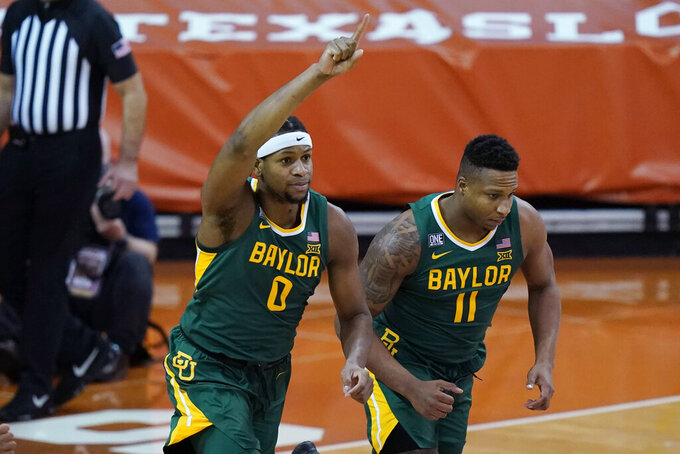 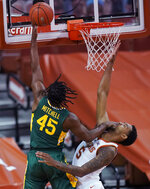 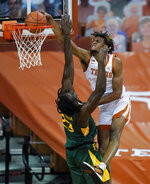 AUSTIN, Texas (AP) — Texas played Baylor tougher than most teams have this season. The Bears still shrugged off the Longhorns to stay unbeaten.

Davion Mitchell scored 27 points, Jared Butler added 21 and No. 2 Baylor used a big run to pull away for an 83-69 victory over sixth-ranked Texas on Tuesday night.

Baylor (17-0, 9-0 Big 12) has won every game this season by at least eight points and looked to be in a fight with its closest pursuer in the conference. Texas (11-4, 5-3) was within six points late before Baylor pulled away behind open 3-pointers from Adam Flagler and Mitchell.

Andrew Jones scored a career-high 25 points for the Longhorns, who were back to full strength after going without two starters and coach Shaka Smart in a loss to Oklahoma last week because of COVID-19. Texas also had two games postponed and another canceled.

Baylor has won 10 of its last 11 against Texas. The Bears matched the best start in school history and took a three-game lead in the Big 12 standings.

“I wouldn’t say it’s no pressure,” Mitchell said. “We just keep playing with each other, keep playing together and good things are happening. The job’s not finished, so we’re just going to keep playing hard.”

Both teams shot better than 50% in the first half and Baylor made seven 3-pointers, three times building leads of 10 points or more.

Texas came roaring out of halftime with a 13-4 run. Jones made a 3-pointer, Matt Coleman added another and Jones finished a breakaway with a dunk that put Texas ahead 47-45.

“You know they are not going to get rattled,” Smart said. “Tip of the hat to Baylor and the way they attacked, particularly after we took the lead. That four- or five-minute stretch for us was how you have to be, but you have to be that way over 40 minutes.”

The Bears answered the Texas run in a big way.

Mitchell started with a long jumper and Flagler and Matthew Mayer made consecutive 3-pointers. Two free throws by Butler and consecutive driving baskets by Mitchell quickly had Baylor back up by 10 with 12 minutes left.

With 13:21 left in the game, Greg Brown flushed a thunderous dunk that got Texas within 55-51 but was hit with a technical foul for taunting. Butler made two free throws and another quick basket put Baylor up by 10.

“Jared’s been around, he knows that it’s hard to win on the road. You’ve got make sure you that handle whatever crowds they have, whatever energy they have,” Drew said. “Jared’s a big-game player, so you can always get the best in the biggest moments from him.”

Brown, meanwhile, had a frustrating night. Early fouls and defensive lapses had the freshman on the bench for most of the first half. He finished with five points.

“It just can’t happen,” Smart said of the technical foul. “When you have a big-time dunk like that it really injects energy into your team, and then when there’s a technical foul, the momentum goes the other way.”

Baylor: The Bears only attempted four free throws and made them all. They shot 58.6% from the field and 52.4% from 3-point range.

Texas: The Longhorns are having one of their best seasons in years but have lost three of their past four at home and likely won't challenge Baylor in the Big 12. The Longhorns showed the rust of missed games and practices as Texas had little offensive punch outside of Jones and the defense collapsed late.

“This game was important for us,” Jones said. “I don't want to give any excuse for the way we played tonight. Coach is trying to establish a culture that can travel regardless of what happens.”

The Longhorns were just 3 of 14 from on free throws while shooting 55% from the field and making 10 3-pointers.