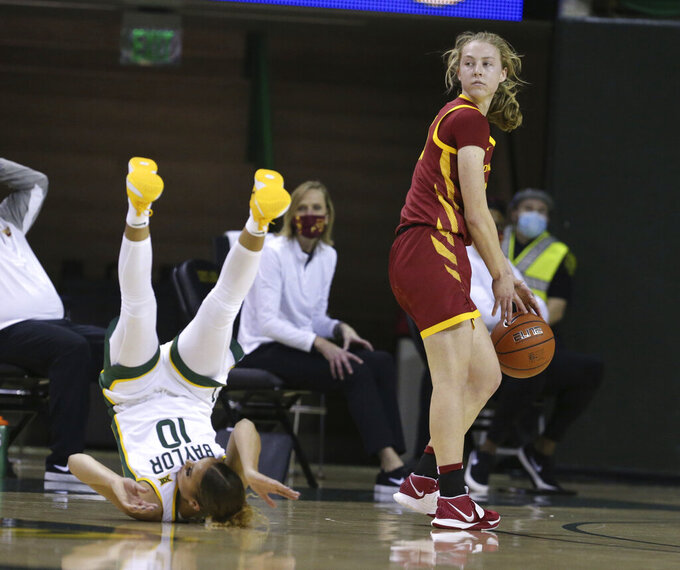 Iowa State guard Emily Ryan, right, looks over her shoulder as Baylor guard Jaden Owens flips over during a play in the second half of an NCAA college basketball game, Saturday, Jan. 16, 2021, in Waco, Texas. (Rod Aydelotte/Waco Tribune-Herald via AP)

The Big 12's best team this season faces off with arguably its best player on Saturday when second-ranked Baylor heads to Oklahoma State, where the Bears (13-0, 6-0) will try to shut down the Cowboys' Cade Cunningham. The likely NBA lottery pick is averaging 17.8 points while shooting better than 45% from the field. But while Oklahoma State (9-3, 3-3) has one clear-cut star, the Bears have several: Jared Butler was 10 of 14 from the field and scored 30 points in their win over ninth-ranked Kansas on Tuesday night, while Macio Teague is averaging more than 15 points, Jonathan Tchamwa Tchatchoua nearly seven boards and Davion Mitchell a league-leading 5.7 assists per game.

The Jayhawks try to bounce back Saturday at Oklahoma while No. 14 West Virginia visits Kansas State. Iowa State continues to have problems with COVID-19 and had its game against No. 12 Texas Tech postponed, while a positive test involving TCU's Jamie Dixon led to the Horned Frogs getting their game against fourth-ranked Texas pushed to a later date. The next game for the Red Raiders would be Monday night against the Mountaineers.

Texas Tech’s Mac McClung scored 22 points while hitting the winning jumper with three seconds left in the Red Raiders' 79-77 win over Texas last week. McClung followed up with 24 points while helping Texas Tech hang with Baylor until the final minutes of a 68-60 defeat. The transfer from Georgetown has scored in double figures in five straight and six of his last seven games, including 21 points in a losing overtime effort against Oklahoma State.

Baylor is among four unbeaten teams and the only one from a Power Five league remaining. ... Oklahoma followed an 82-46 win over TCU with a 76-50 victory at Kansas State. It's the first time since 2002 the Sooners have won consecutive conference games by at least 25 points. ... Oklahoma's next four opponents are Top 25 teams: Kansas, Texas, Alabama and Texas Tech. ... Texas forward Kameka Hepa tied a career best with 15 points against Kansas State after playing a total of 8 minutes, 15 seconds in the Longhorns' first 12 games. ... West Virginia's Deek Culver had his 23rd career double-double with 14 points and 16 rebounds in the Mountaineers' 72-70 loss to Texas.

Iowa State earned its first road win over Baylor since 1997 when Ashley Joens scored 27 points in a 75-71 victory over the sixth-ranked Lady Bears. Joens had 14 points and six of her 12 rebounds in the fourth quarter. ... Baylor's loss to the Cyclones snapped its 61-game home win streak. ... West Virginia's Esmery Martinez is fourth nationally with 13.2 rebounds per game. ... Kansas State was due to play West Virginia and Kansas this week after having games against Oklahoma, West Virginia, Baylor, TCU and Oklahoma State postponed due to COVID-19 protocols. ... TCU overcame a seven-point fourth-quarter deficit in an 81-78 win over the Jayhawks. ... Texas Tech beat Texas 74-66 for its first win over the Longhorns in eight years.