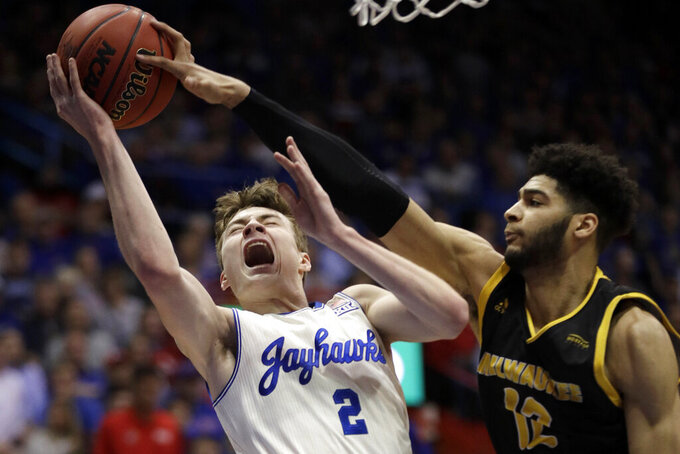 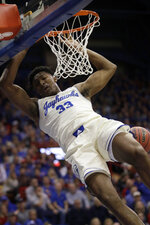 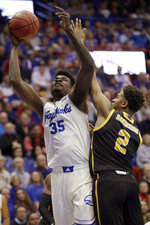 LAWRENCE, Kan. (AP) — It wasn't the 3-pointers that Ochai Agbaji poured in for Kansas, nor the smooth jumpers and easy layups that Devon Dotson put away, that left the pair with toothy grins after a rout of Wisconsin-Milwaukee on Tuesday night.

It was the alley-oop Dotson threw and Agbaji turned into a reverse jam.

“I just wanted to put some style on it," Agbaji said, when asked whether the 180-degree turn was necessary because of the pass. “I just jumped and I was like, 'Man, might as well.'"

Indeed, it was all about style most of the night for second-ranked Kansas, which roared to a big early lead before coasting to a 95-68 victory.

Dotson had 22 points and nine assists, Agbaji also had 22 points, and Udoka Azuibuke thundered his way through the lane to 15 points and 17 rebounds as the Jayhawks (8-1) cruised to their 26th consecutive home win and their 300th for the decade — Gonzaga with 304 is the only other Division I program to have reached that milestone.

“Three hundred wins in a decade means you're averaging 30," Jayhawks coach Bill Self said, “and we still have a chance to add to it a little bit. ... I think that speaks volumes of the types of players you've had in the program, and hopefully the next decade will be just as productive beginning in January."

Darius Roy had 25 points to lead the Panthers (5-5), who actually outscored the Jayhawks most of the second half. Leading scorer Te'Jon Lucas was held to 11 points on 1-of-6 shooting from beyond the arc.

“You prepare for it all you want. You can draw up schemes,” Lucas said, “but when you get out there you have to execute. And for the first 10 or 15 minutes of the game, we didn't execute anything. Thats what led us to being down so much."

Kansas basically put the game away with a faultless first 12 minutes.

Agbaji, who went for 20 points and 12 boards against Colorado over the weekend, continued his torrid pace by knocking down three 3-pointers in the first three minutes. David McCormack and Azubuike got into the act down low, using their massive bulk against the smaller Panthers. And then Dotson went on a scoring binge, using cat-quick penetration to get into the lane and knocking down a series of 3s when Milwaukee began to collapse on the paint.

The result was a 17-1 run to start the game, a 23-4 advantage by the 14-minute mark, and a 40-12 lead — and a whole bunch of used timeouts by Milwaukee coach Pat Baldwin — by the time the buzzer sounded on the under-8 media timeout.

Just how efficient was Kansas by that point? Try a 19-3 rebounding advantage, an 8-of-13 mark from the 3-point line, and 11 assists on the Jayhawks' first 15 made field goals. Oh, and they had just three turnovers.

The crisp passing and utter selflessness was on display during one fast-break opportunity, when Dotson curled a bounce pass around a defender to Agbaji, who passed up his own look to dump the ball to Tristan Enaruna for a layup.

Milwaukee finally had a stretch of success late in the first half, but the Jayhawks still cruised into the locker room with a 52-27 lead. The second half was mostly academic, punctuated by a few big highlights — like the alley-oop pass from Dotson that Agbaji threw down with a rim-rattling reverse dunk with about 12 minutes to go.

It was a nice way to kick off a festive victory party down the stretch.

“They were very special tonight," said Baldwin, who grew up in nearby Leavenworth, Kansas. “It was great coming back home and I wish we had a better performance to show for it."

Milwaukee never gave itself a chance by spotting Kansas a big lead on the road, but it also never gave up. The Panthers scored seven of the first eight points to start the second half and stood toe-to-toe with the Jayhawks the rest of the way.

Kansas is poised to move to No. 1 next week after top-ranked Louisville lost to Big 12 rival Texas Tech at the Jimmy V Classic in New York. The result was shown on the video boards in Allen Fieldhouse and elicited a big roar.