No. 2 Louisville breezes past Western Kentucky 71-54 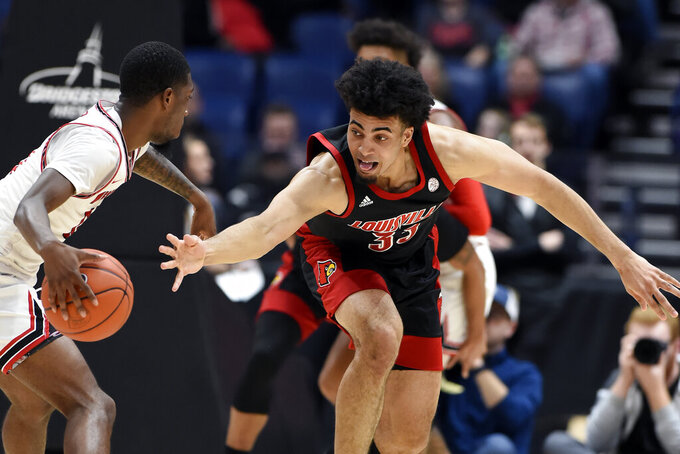 Louisville forward Jordan Nwora (33) reaches for the ball as he tries to knock it away from Western Kentucky guard Taveion Hollingsworth (11) during the second half of an NCAA college basketball game Friday, Nov. 29, 2019, in Nashville, Tenn. (AP Photo/Mark Zaleski) 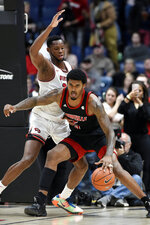 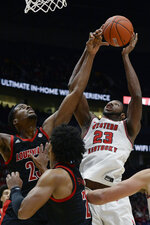 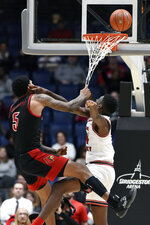 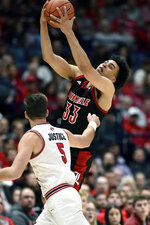 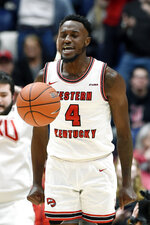 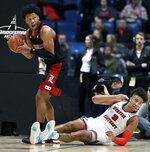 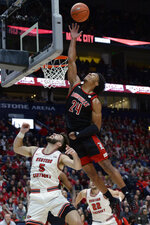 NASHVILLE, Tenn. (AP) — Louisville downplayed the possibility it could earn its first No. 1 ranking in six years next week.

The second-ranked Cardinals already had made a convincing argument on the floor.

Jordan Nwora scored 25 points as Louisville defeated Western Kentucky 71-54 on Friday to remain unbeaten. There will be a new No. 1 team when The Associated Press Top 25 comes out on Monday because top-ranked Duke fell at home to Stephen F. Austin 85-83 in overtime on Tuesday.

“My job is for me to get them to understand that we haven’t arrived,” Louisville coach Chris Mack said. “There’s no team that’s arrived. No team’s arrived. A lot of people are saying that we haven’t played anybody. A lot of people are saying we’re not there. Maybe we aren’t deserving. I don’t care. The only thing I care about is improving from our game today against Western Kentucky.’’

The Cardinals last topped the AP poll on Jan. 14, 2013. They went on to win the national championship that year, though their title was later vacated as part of NCAA sanctions.

Dwayne Sutton added 15 points as Louisville (7-0) never trailed while holding Western Kentucky (6-2) to its lowest point total and shooting percentage (37%) of the season.

“It’s very obvious why they’ll be the No. 1 team in the country come Monday,” Western Kentucky coach Rick Stansbury said. “They don’t have a lot of holes.”

Western Kentucky shot just 1 of 17 from 3-point range. The Hilltoppers had been making 41.1% of their attempts from beyond the arc before Friday.

Louisville scored the game’s first nine points and led by as many as 19 points before taking a 37-23 advantage into halftime.

Western Kentucky cut the margin to 51-42 when Bassey hit both ends of a 1-and-1 with 9:35 remaining. Louisville responded by scoring seven straight points — capping the run with a 3-pointer by Nwora — as part of a 13-2 spurt that put the game away.

“We just wanted to stay poised,” Sutton said. “When a team makes runs, we just want to continue to be ourselves and play our game. I think that starts on the defensive end. We got some nice stops there that kind of ended their run in the second half.”

Louisville: Whether or not the Cardinals earn the No. 1 ranking, they’re about to find out just how good they are as they prepare to host Michigan in the Big Ten/ACC Challenge. Michigan is currently unranked but could move near the top of the poll Monday after beating Iowa State, No. 6 North Carolina and No. 8 Gonzaga this week to win the Battle 4 Atlantis at Paradise Island, Bahamas.

“I know they just went in and destroyed the field at the Atlantis, which goes without saying is a tough field,” Mack said. “They’ve got a point guard that we tried to recruit for two years at Xavier in Zavier (Simpson), and he’s one of the best point guards in the country. They’ve got great size at the rim. It’s going to be a huge challenge.”

Western Kentucky: The Hilltoppers lacked the efficiency on offense they had shown for much of the season. Western Kentucky was held 30 points below its scoring average and scored 15 points fewer than its previous season low. They had been shooting 52.8% as a team before Friday.

Louisville waits to see if it’s No. 1 on Monday. Not only did No. 1 Duke lose this week, No. 3 Michigan State fell to Virginia Tech.

Western Kentucky’s Camron Justice and Carson Williams combined for eight points and shot 3 of 9. They had been averaging a combined 27.6 points.