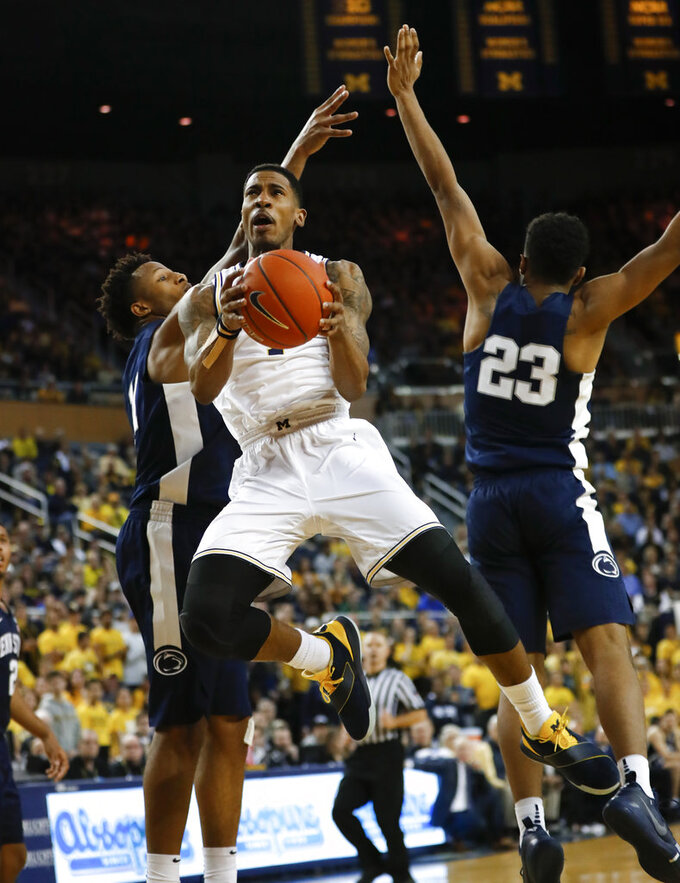 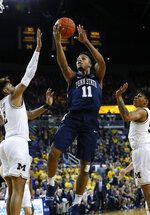 "I think today was the first time that I was actually being denied the ball on the perimeter, so it was something that I had to adjust to," the Michigan sophomore said. "But we know that we were able to read the coverages. I think that's something that really started to get us going later in the second half."

Poole scored 17 points and Iggy Brazdeikis had 16 points and 11 rebounds as No. 2 Michigan returned to Big Ten play with a 68-55 victory over Penn State on Thursday night. It was the ninth straight game in double figures for Poole, who appeared comfortable on a night when his team struggled to get untracked.

The unbeaten Wolverines (14-0, 3-0) weren't always that dominant while playing lesser competition in December, and the first half against Penn State (7-7, 0-3) wasn't all that great either from an aesthetic standpoint. The teams combined for 18 turnovers in the first 20 minutes, and Michigan led 25-20.

The Nittany Lions scored the first two points of the second, but the Wolverines responded with a 13-3 run.

Penn State shot 1 of 14 from 3-point range and couldn't keep up after holding Michigan to 36-percent shooting in the first half.

"I really enjoyed this game, competing. I thought our team showed some real grit and some incredible passion," Nittany Lions coach Patrick Chambers said. "This is a game we can build on."

Chambers apologized following the game for an incident in the first half in which he appeared to shove freshman guard Myles Dread during a timeout.

Penn State: Defense is the calling card for this Penn State team. The Nittany Lions have held 12 of their 14 opponents below their scoring average coming into the game. Michigan came reasonably close to its average of 73.2 points, and Penn State couldn't overcome its 18 turnovers.

Michigan: Only four undefeated teams remain in Division I, and the Wolverines kept their run going with a workmanlike effort. Michigan has won eight straight against Penn State and has won 28 of its last 29 overall — with the only loss coming in last season's national title game against Villanova.

Michigan sophomore Isaiah Livers missed the game. He's been dealing with back spasms, and coach John Beilein said he'll have an MRI on Friday.

"He practiced the last two days. He asked out of an extra session on Tuesday because his back was a little sore," Beilein said. "We worked on it. He practiced fine yesterday, but he woke up really sore today."

The Wolverines trail only Duke in the AP Top 25 . The Blue Devils face Clemson on Saturday.

Michigan: The Wolverines host No. 21 Indiana on Sunday.