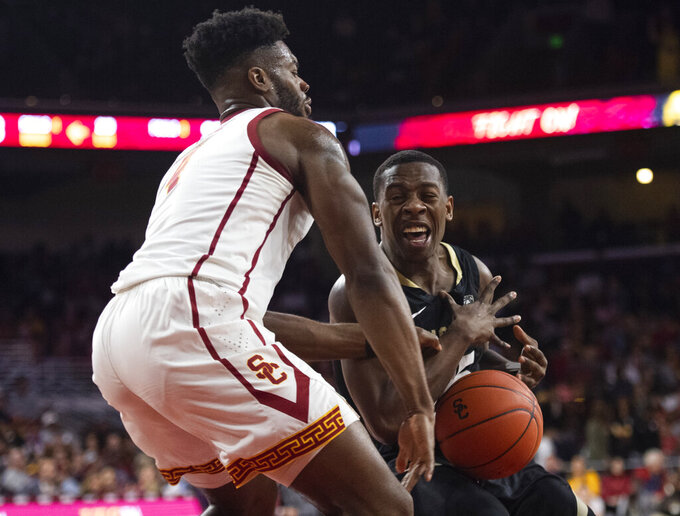 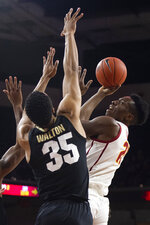 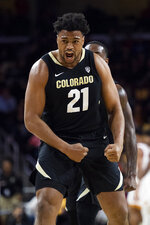 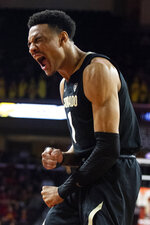 LOS ANGELES (AP) — Colorado came across town still irked by its four-point loss at UCLA. The 20th-ranked Buffaloes took out their ire on Southern California.

Tyler Bey scored 16 points in a 78-57 rout on Saturday night that salvaged a road split for the Buffs. The defeat in Westwood on Thursday was a costly one; it left them in a second-place tie with the Trojans at 6-3 in the Pac-12.

“That was a very bad loss for us,” McKinley Wright IV said. “It shouldn't have happened. Every game from here on out is a must-win.”

The Buffs (17-5) took command against the Trojans with 8 1/2 minutes to go in the first half and kept the pressure on.

“The last 10 minutes we played against UCLA, we needed to have for 40 minutes tonight,” Wright IV said. “We wanted to stay locked in.”

Wright IV, D'Shawn Schwartz and Lucas Siewert added 11 points each. Schwartz helped key a 17-4 run that opened the second half. He scored six straight points, highlighted by a one-handed dunk on a steal by Wright IV, that extended Colorado's lead to 50-28. The Buffs shot 52% from the floor.

“We just took it personal,” Bey said of the UCLA loss. "We got work to do every game.

The Buffs consistently broke USC's full-court pressure late in the game and on one possession Bey dunked. He got a technical for what he appeared to say afterward. “I was just frustrated with myself,” Bey said.

Isaiah Mobley led the Trojans with 12 points off the bench. Jonah Mathews and Onyeka Okongwu added 11 points each.

“We get them one more time, so we'll make some adjustments,” Mobley said. “It's a wake-up call. We got to dig deep and show our toughness. We got to fix the little things and we'll be all right."

Mathews and fellow starters Ethan Anderson and Nick Rakocevic, along with Mobley, played with three fouls each in the second half. Rakocevic was limited to six points and seven rebounds in 27 minutes.

Colorado: The Buffs swept their series with USC last season and they've now won five of six at Galen Center.

USC: The Trojans had won 11 of 13 coming in, but they never managed a sustained run in the game. A victory over a ranked opponent would have bolstered their resume.

Former Trojan Jordan McLaughlin came to check out his old team after his Minnesota Timberwolves lost to the Clippers earlier in the day. Wearing a Mamba hoodie in honor of the late Kobe Bryant, McLaughlin helped out with the T-shirt toss during a timeout in the second half.

USC: Visits Arizona on Thursday. The Wildcats are 10-1 at home, where the Trojans won last year.