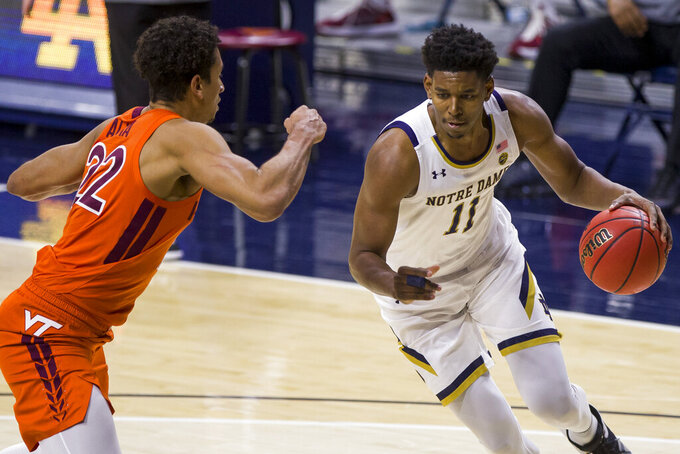 “Everyone on the team goes into every game trying to give it their all,” said the 6-foot-7 Mutts after his 14 points and 11 rebounds helped the Hokies beat cold-shooting Notre Dame 62-51 in an Atlantic Coast Conference game.

“Tyrece is a big part of this team,” Mutts continued. “What happened was unfortunate, but you have to roll with the punches.”

Virginia Tech rebounded from its 78-60 loss Saturday at Syracuse without the services of Radford, who was arrested early Sunday morning in Blacksburg, Virginia, on charges of driving while intoxicated and carrying a concealed weapon. The team suspended him Monday.

“You’ve heard me say it — if we continue to rebound and play defense, we’re going to have a shot,” Young said after his Hokies won the battle of the boards 38-32 while holding the Irish to their fewest points of the season.

Prentiss Hubb scored 22 points to lead the Fighting Irish (5-9, 2-6), who ended a two-game winning streak. The guard scored just five points after intermission after the Irish shot 32% in the first half.

“They’ve shut us down physically and defended us twice now,” Notre Dame coach Mike Brey said. “They’re tougher. They’ve got tougher guys. I love my guys, but they’re really tough and physical defensively and it’s just exhausting playing against them. It kind of wears you out.”

Virginia Tech built 15-point leads twice in the first half, the second time on Aluma’s three-point play with 3:24, and Notre Dame never got out of the hole.

Notre Dame: Irish were coming off two victories, including a 73-59 win at Miami on Sunday, but hit just 3 of their first 18 shots. It was reminiscent of their second half in a 77-63 loss at Virginia Tech Jan. 10 when they made just two field goals and shot 10.5% from the field in the second half. Nate Laszewski, Notre Dame’s leading scorer coming in, was held to seven points but had 10 rebounds.

“They’re men and they’re physical in the lane offensively and they are really athletic defensively,” Brey continued in his praise of the Hokies.