No. 20 Illinois beats No. 24 Iowa for share of Big Ten title 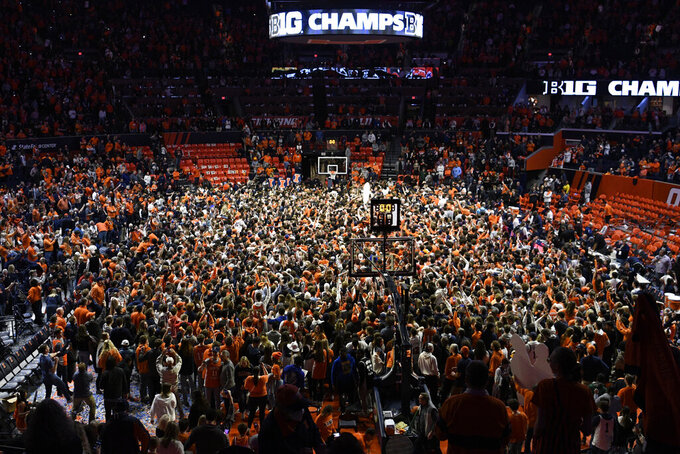 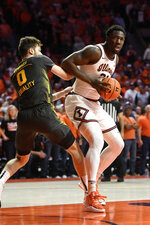 The Fighting Illini’s hopes for a conference crown were kept alive when Nebraska upset No. 10 Wisconsin earlier Sunday. They didn’t let the opportunity go to waste, claiming at least a share of the Big Ten championship for the first time since winning it in 2004 and ’05.

“Five years ago, I was wondering if we’d ever get out of the Wednesday game (of the Big Ten tournament),” Illinois coach Brad Underwood said. “We weren’t even close. For Trent (Frazier) and DaMonte (Williams) to go out this way, this is why I do this.”

Iowa (22-9, 12-8) missed five of its first six shots but eventually got on a 13-0 scoring run. The burst started with Kris Murray’s 3, the first of nine straight made shots for the Hawkeyes. Peyton Sandfort hit a 3 and then made another jumper on the next possession before Tony Perkins’ layup put Iowa ahead 32-19.

Plummer revived Illinois’ offense with back-to-back 3s, and the Illini closed the half on a 9-0 run as Plummer drove and scored with 4 seconds left to make it a 43-37 deficit.

“(Illinois) has got some guys who are competitors that are really good players on really good teams,” Iowa coach Fran McCaffery said. “Very impressed with the job that Brad has done with his crew, not only this year, but over the years since he got here.”

Keegan Murray had 22 points and 11 rebounds for the Hawkeyes, while Perkins had 17 points and 12 boards. Kris Murray added 13 points.

Curbelo had 14 points and six assists off the bench for Illinois.

Reflecting on his career at Illinois, senior Frazier was grateful he stuck it out with the program after two losing seasons as an underclassman.

“To win games and championships, your culture has to be set,” Frazier said. “It wasn’t set yet (when we arrived). We were still rebuilding and trying to figure things out, but as time went on, we continued to get culture guys, better players and guys who bought into what Coach Underwood wanted. Sticking with it through the ups and downs made it worth it.”

Iowa: Despite missing out on a double-bye in the Big Ten tournament, the Hawkeyes are still one of the hottest teams in the country, winning nine of their last 11 games. With the Murray brothers clicking and scoring support from the likes of Perkins and Sandfort, Iowa is a daunting defensive assignment for any team.

Illinois: No one will enter the Big Ten tournament in Indianapolis feeling as good as the Illini, who have won three games in a row and will take the No. 1 seed after holding the tiebreaker over Wisconsin due to an 80-67 win over the Badgers on Feb. 2.

Iowa: Opens the Big Ten tournament on Thursday as the 5-seed.

Illinois: Opens the Big Ten tournament on Friday as the 1-seed.