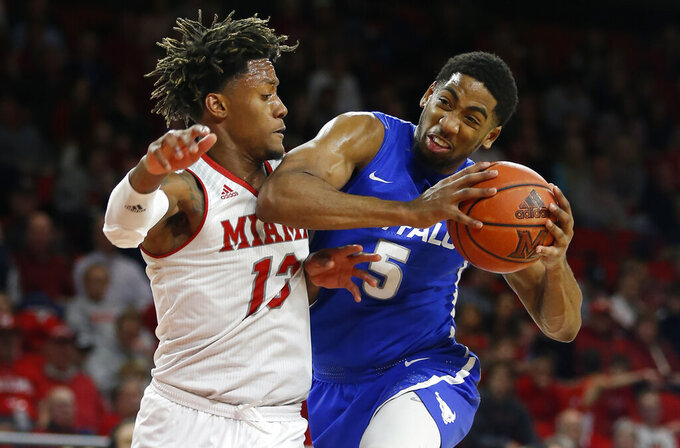 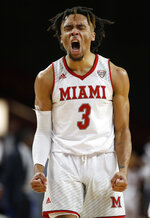 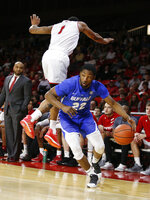 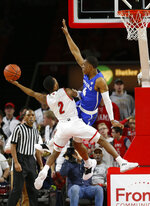 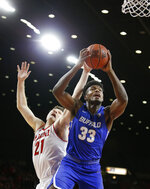 OXFORD, Ohio (AP) — Buffalo was up by 18 points before the first media timeout, getting baskets as easy as they come. The rest of the night was a slog as the 21st-ranked Bills clinched a share of the Mid-American Conference title.

Given their high expectations, they left the court with more relief than celebration.

CJ Massinburg shook off an ankle injury and scored 20 points Friday night, leading Buffalo to a 77-69 victory that showed what the Bills can be when they're locked in — and how much they can struggle when they're not.

"Obviously our goal is to win the league, but we've got much bigger goals than that," coach Nate Oats said. "We need to be playing at a high level come the NCAA Tournament. In order to do that, We've got to get on a roll here.

"We've got to be playing our best basketball over these next two, three weeks. I don't think over 40 minutes we did that today."

Buffalo opened the game with an 18-point run and never trailed while winning its seventh straight overall. Miami (15-14, 7-9) got the lead down to 70-67 with 2:30 left on Dalonte Brown's free throws, but Dontay Caruthers' three-point play and Nick Perkins' 3 blunted the comeback.

"I don't think anybody panics when the game gets close," Massinburg said. "Nobody tries to play hero ball."

The Bulls' opening run featured a pair of 3s by Jayvon Graves. The RedHawks were still scoreless at the first media timeout, missing five shots and turning it over three times.

"I just felt like we weren't together," said Bam Bowman, who led Miami with 13 points and 13 rebounds. "The crowd being here got our adrenaline flowing, and we weren't ourselves. Once we picked it up, we were able to get back in the game."

Nike Sibande led a 14-0 run that helped Miami cut it to 37-33 at halftime. Massinburg scored seven straight points as Buffalo rebuilt the lead to 15 points and withstood Miami's closing surge .

The Bulls got a scare during their opening run when Massinburg, their leading scorer at 18.7 points per game, aggravated a sore left ankle on a reverse layup and hit the floor. He limped off but returned a few minutes later. Bowman has been playing through shoulder and ankle injuries.

"It's been a little frustrating," Massinburg said.

The Bulls are in position to remain ranked for the 17th straight week, extending their record for a MAC team.

Buffalo's 26 regular-season wins are the most in school history. The Bulls set a school record with 27 wins overall last season, when they reached the second round of the NCAA Tournament.

Miami: The RedHawks have alternated wins and losses in their last 10 games.

Buffalo went only 11 of 34 from beyond the arc, with Massinburg missing six of his seven shots.