No. 21 UCLA and USC renew rivalry this week 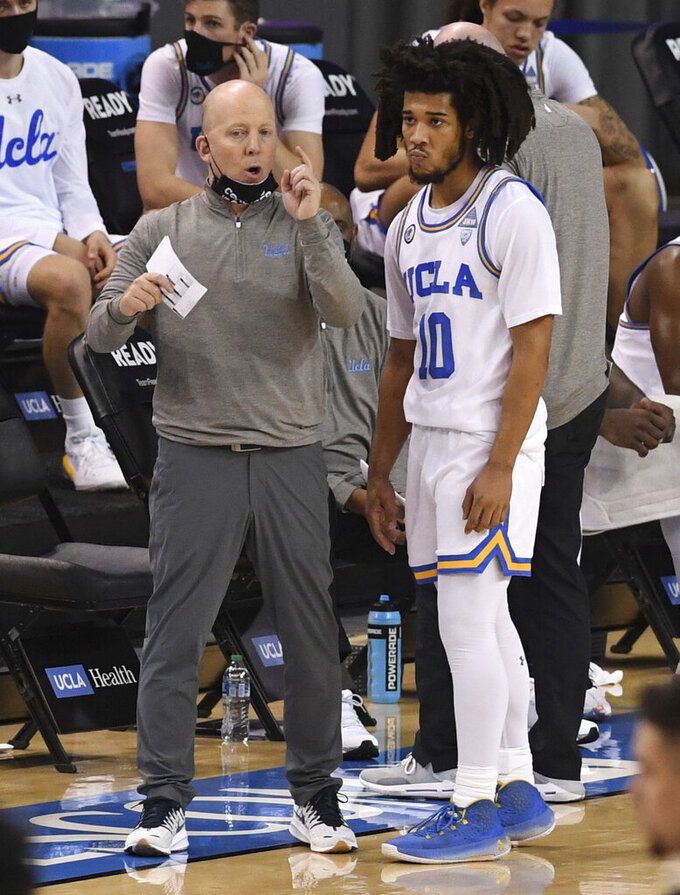 Head coach Mick Cronin speaks with Tyger Campbell #10 of the UCLA Bruins against the Oregon State Beavers in the first half of a NCAA basketball game at Pauley Pavilion in Westwood on Saturday, January 30, 2021. (Keith Birmingham/The Orange County Register via AP) 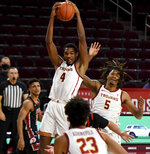 GAME OF THE WEEK: No. 21 UCLA at Southern California, Saturday. The first of two meetings between Southern California rivals could tighten up the Pac-12 regular-season race. The Bruins lead the conference at 9-1 after beating Oregon State last week. The Trojans are a game back at 8-2 after beating Stanford 72-66 Tuesday night. Containing Evan Mobley will be a huge key for UCLA. The freshman big man is seventh in the conference with 16.3 points per game and leads with 8.8 rebounds. USC's biggest task will be slowing the penetration of Tyger Campbell, the Pac-12 leader with 6.0 assists per game.

LOOKING AHEAD: Two teams trying to stay within reach of the Pac-12 lead meet on Saturday when Arizona plays at Colorado. They're tied for fourth at 7-4. ... Cal and Stanford resume their rivalry with two games this week, Thursday in Berkeley and Sunday at Stanford. ... Oregon will play its second game since Jan. 9 against Washington State on Thursday. The Ducks, who have been dealing with COVID-19 issues, also play Washington on Saturday. ... Arizona State has been hit with COVID-19 issues again, causing the Sun Devils to postpone their games this week against Colorado and Utah.

INSIDE THE NUMBERS: Colorado leads the conference in scoring defense, allowing 63.83 points per game. ... Utah's Mikael Jantunen is shooting 65% from the field. ... Washington's Quade Green has scored at least 20 points in three of the last four games.

PLAYER TO WATCH: Alfonso Plummer, Utah. The senior guard from Puerto Rico scored all 23 of his points in the final 15 minutes to help the Utes rally from a 19-point deficit to beat Colorado 77-74 on Saturday. He was named the Pac-12 player of the week.

ON THE WOMEN'S SIDE: No. 9 Arizona plays at No. 12 Oregon on Monday in the 10th game between AP Top 25 games in the Pac-12 this season. The Wildcats are at Oregon State on Friday, and the Ducks play Arizona State. ... No. 6 Stanford hosts Colorado and Utah this week as the Cardinal try to hold onto the conference lead at 12-2. ... Arizona's Aari McDonald, Stanford's Haley Jones and Kiana Williams, and UCLA’s Michaela Onyenwere were named to the Wooden Award late-season top 20