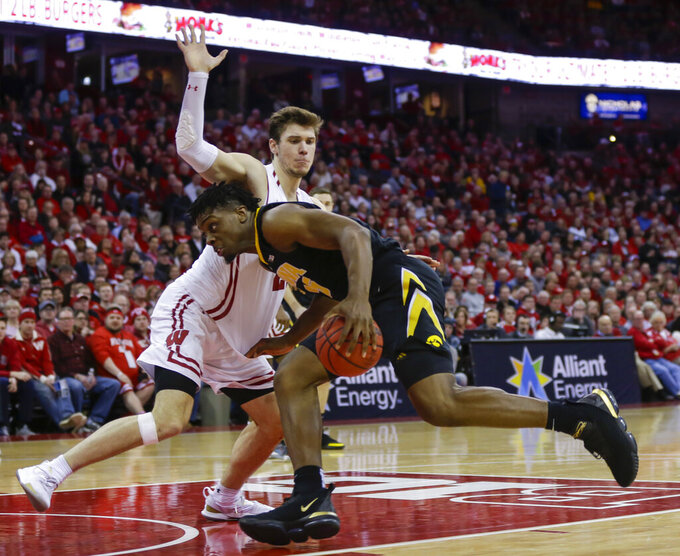 MADISON, Wis. (AP) — Wisconsin coach Greg Gard said he had a feeling Ethan Happ would have a good game against Iowa.

Happ did a little bit of everything to help No. 21 Wisconsin beat Iowa 65-45, scoring 21 points in his final home game and grabbing 14 rebounds. He also had three assists, two blocks and two steals, all the while helping keep Iowa's post players in foul trouble for much of the game.

Fellow senior Khalil Iverson had the first double-double of his career with 11 points and 11 rebounds.

Gard said Happ set the tone in Wednesday's practice, with energy and body language that were "off the charts."

"I went home thinking, 'You know what? We'll be OK tomorrow because our leader was good today,'" Gard said.

"I actually left practice with a smile on my face."

As much as things went well for Happ, Iverson and Wisconsin (21-9, 13-6 Big Ten), it was another disappointing performance for the Hawkeyes, who have now lost four of five. That includes three straight losses by double digits, the last two with coach Fran McCaffery missing from the bench as he finished a suspension for going after a referee following a 90-70 loss to Ohio State Feb. 26.

They shot 31 percent from the field for the game, their worst performance of the season, and their previous scoring low was 65 in a one-point loss to Maryland Feb. 19.

Meanwhile, their post players couldn't stay on the floor. Luka Garza went to the bench in the first half after being whistled for his second foul with nearly 9 minutes left. Nicholas Baer followed a few minutes later.

Then it was Jared Cook's turn in the second half. He was whistled for his third foul less than 4 minutes into the half, came back five minutes later and was promptly hit with his fourth.

After scoring 19 and grabbing 15 rebounds in the two teams' first meeting Nov. 30, Cook was scoreless while registering seven rebounds.

Meanwhile, Wisconsin turned Iowa's 25 fouls into 27 free throw attempts, though the Badgers made just 17. Meanwhile, the Hawkeyes were just 4 of 6 from the line.

Iowa assistant Kirk Speraw wouldn't blame the performance on McCaffery's absence, saying the Hawkeyes are a mature team and the head coach was involved in everything aspect of the game plan other than making calls on the court.

He also didn't have any answers for their poor shooting, saying they got good looks, but they just didn't go down.

"Sometimes you hit rock bottom before you bounce out of it and get going," Speraw said. "We just have to stay positive with ourselves and each other, and guys have to maintain their confidence."

Thursday was a rarity for the Badgers after their previous eight games were decided by single digits, including the last two that were decided in the final seconds. The Badger's last double-digit win was by 11 over Nebraska on Jan. 29. The cushion allowed Gard to pull each of his seniors in the final minutes so they could be recognized by the crowd.

"It was definitely nice to finally stomp on someone's throat and not let them hang around," Happ said.

Iowa: The Hawkeyes lost their third straight game by double digits and did it in ugly fashion.

Wisconsin: The Badgers came in needing to win each of its last two games to secure a top-four finish in the conference and clinch a double-round bye in the Big Ten Tournament. They took care of the first one.

Iowa: Travels to Nebraska on Sunday