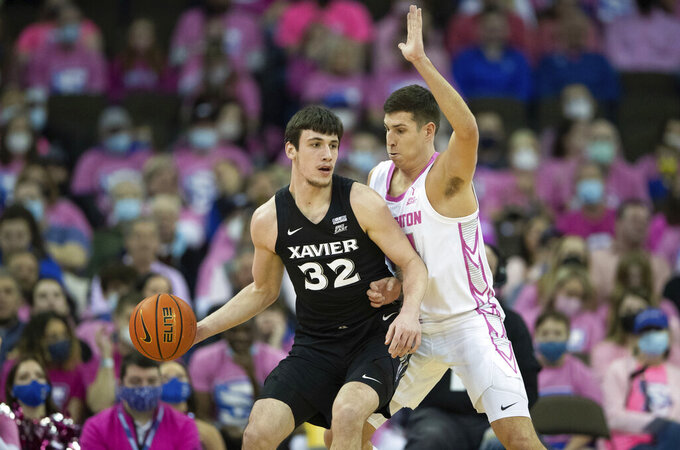 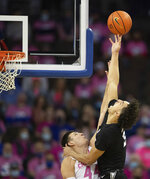 OMAHA, Neb. (AP) — His team down 17 points at halftime, Xavier coach Travis Steele walked into the locker room and posted a message on the grease board.

“Most overrated thing in sports is the halftime score,” he said he wrote. “Nobody remembers if you’re winning at halftime. It’s why you play 40 minutes.”

Jack Nunge and Paul Scruggs went out and fueled a dramatic turnaround that saw No. 21 Xavier score 29 of the first 31 points of the second half and go on to beat Creighton 74-64 on Saturday.

Nunge made a career-high four 3-pointers and scored 16 points — all in the second half— and Scruggs had 13 of his 18 points after the break as the Musketeers won for the first time in three games. Zach Freemantle had 16 points and Nate Johnson made five 3s for all 15 of his points.

“We stuck together through adversity, and that’s what we’re known for,” Johnson said. "We have a good group of guys that want to play hard and play together. That’s what we did — played together, played with swagger and played the best that we can.”

Creighton (12-7, 4-4) dropped its second straight and lost for the first time in conference play at home. It was the Bluejays' biggest blown lead at CHI Health Center, which opened in 2003.

“It's going to take a little self-reflection on their part and my part to find a way to come out of that locker room better in the second half,” Creighton coach Greg McDermott said. “We let the opponent dictate what they wanted to do on both sides of the floor. We need to learn and need to grow and get better.”

Xavier had overcome a 12-point deficit to win at DePaul, 68-67, on Jan. 19, but that was against one of the bottom teams in the Big East.

In front of a packed house juiced up from watching the Bluejays build a big early lead, this comeback was much more improbable.

The Musketeers had shot 23% in the first half and scored their fewest points in a half this season while getting down 36-19.

The 7-foot Nunge, who entered the game a 29% 3-point shooter, splashed in two straight 3s from the top of the key to begin the game-defining 29-2 run. The Musketeers made 5 of 7 3s and 12 of 19 shots overall during the run while Creighton was 0 for 8 and committed seven turnovers.

Ryan Nembhard led the Bluejays with 23 points and Ryan Kalkbrenner had 13.

“We got a little complacent coming out of halftime and were stagnant on offense,” Nembhard said. “I feel we always thought we could win the game. We needed to string together a couple stops, and we couldn’t do it.”

Nembhard and Arthur Kaluma combined for 18 of the Bluejays' first 22 points, and they were up 10 early as Xavier went through a 2-for-20 shooting lull.

Kalkbrenner's three-point play finished a 19-6 run that put Creighton up 25-12. Back-to-back 3s by Alex O'Connell, another by Nembhard and Kalkbrenner's second-chance putback made it 36-19 at halftime.

“We all had the ultimate confidence in each other,” Nunge said. “The open man is the best man to shoot the ball, and we did that in the first half and throughout the whole game — but we knocked down the open shots in the second half.”

Creighton: This was a devastating blow for a team trying to work its way out of the middle of the pack of the conference, and now they have to play three of their next four games on the road.

It was Creighton’s 12th Pink Out Game, with the Bluejays’ special white-and-pink uniforms auctioned and proceeds going to help support cancer patients in Omaha.

“I wish I could just bottle up that second half and have it for the rest of the year.” — Steele.

Creighton: visits No. 20 UConn on Tuesday.