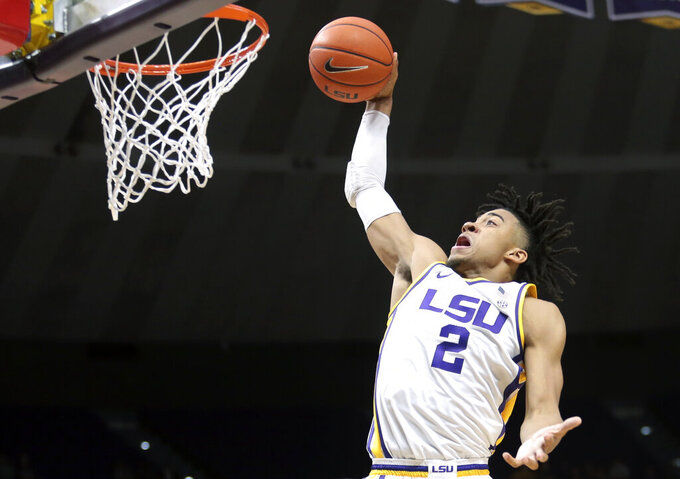 Smart and Williams each scored 21 points to lead No. 22 LSU to a balanced 88-79 victory over Bowling Green on Friday night.

Smart, replacing two-year starter Tremont Waters at point guard, reached 20 points for just the second time in his career. He also had a career-high eight rebounds and handed out five assists.

"I just wanted to bring the energy," Smart said. "We came out kind of slow, but we eventually found our groove in the first half. They knew I like to drive the ball. I have been working hard on being consistent with my 3-pointer and it paid off tonight."

Skylar Mays, the only returning starter in the Tigers' lineup, had 18 points and eight rebounds. Darius Days had 13 points, and freshman Trendon Watford scored 10 points.

Justin Turner had 26 points for Bowling Green (1-1). Caleb Fields scored 17 and Dylan Frye had 15 for the Falcons, who have not defeated a power five team in six seasons.

After trailing by six points in the first seven minutes, LSU took control by scoring 19 consecutive points. The Tigers knocked down five 3-pointers in that stretch — two by Smart and one each by Williams, Mays and Days.

Days' 3-pointer put LSU ahead 34-20 with 6:05 left in the first half. Bowling Green cut the deficit during the final three minutes. Frye and Turner made 3-pointers as the Falcons pulled within seven points at 43-36. Mays' three-point play gave the Tigers a 46-36 lead at the half.

"Bowling Green came out very physical," LSU coach Will Wade said. "They gave us a lot of resistance early and we were playing on our heels. Javonte hit a bunch of tough shots. We were able to hang in there and go on that 19-0 run. Our spurt-ability is really good. We just have to be more consistent."

Bowling Green made one run at LSU early in the second half. A 3-pointer by Fields and a basket by Frye left the Falcons behind 51-46 with 14:54 remaining in the game. LSU quickly pushed its advantage back to 61-48. Mays and Watford each scored four points in that stretch.

LSU: The Tigers won their 33rd straight home opener. LSU has not a lost a home opener since being beaten by TCU in the 1986-87 season. The Tigers have also won six consecutive season-openers.

Bowling Green: The defeat continued the Falcons' drought against ranked opponents on the road. Bowling Green last beat a ranked team on the road in the 1989-90 season when it won at No. 25 Michigan State.

Mays was his usual dependable self. Playing 36 minutes, he made six of his 11 field goal attempts. Mays drew four fouls and made 5 of 7 free throws. He also had three assists, one steal and one blocked shot, but also three turnovers.

LSU shot the ball much better than Bowling Green. The Tigers made 47% of their field goal attempts (27 of 57), while the Falcons connected on just 32% (24 of 75). LSU also had a 10-point advantage at the foul line where it made 27 free throws. Bowling Green attempted just 21 foul shots.

LSU will travel to Richmond to face No. 25 VCU, coach Will Wade's former team, on Wednesday night.

Bowling Green will play Jacksonville at the University of Miami on Monday night.