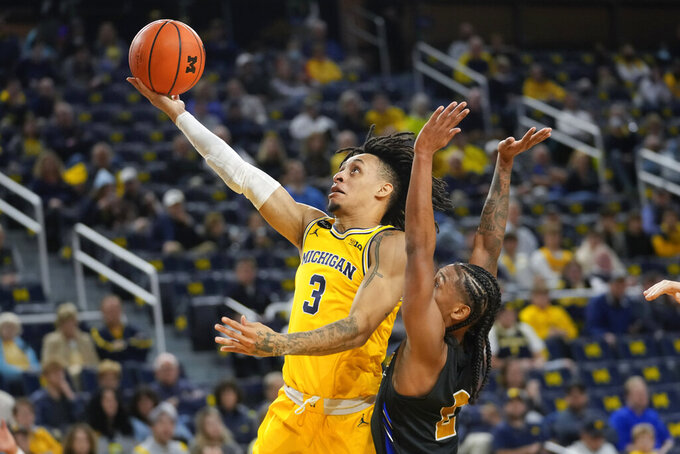 It was the first time the anticipated Dickinson-Howard combo was able to be showcased. Jett Howard, the son of Michigan coach Juwan Howard, said fans should get used to seeing that this season.

“When I first got here, I was trying to get him the ball a lot and I got a lot turnovers,” said Howard who also led the team with five assists. “He just kind of brought me to the side and let me know some the reads I should look at, told me to calm down a little bit. He makes it look easy and he brings so much attention. I'll probably get open drives like I did tonight. Once they overhelp on me, I'll probably just dish to him.”

Juwan Howard called it a “dream come true” to finally coach both Jett and his older brother, Jace at Michigan. He was especially proud of how Jett played in his first collegiate game.

After the Mastodons opened an 8-4 lead, Michigan went on a 20-0 run to take control of the game.

Purdue Fort Wayne twice pulled within nine points in the first half, but Michigan quickly answered to push the lead back into double digits.

After the Mastodons opened an 8-4 lead, Michigan went on a 20-0 run to take control of the game.

Purdue Fort Wayne twice pulled within nine points in the first half, but Michigan quickly answered to push the lead back into double digits.

The Wolverines stretched their advantage to 24 points midway through the second half and the closest the Mastodons could get the was within 12.

“We’re still a work in progress,” said Dickinson. “We’ve got a lot of new parts. There’s still the figuring out phase. We’ve got a good mix of guys that are able to be plugged in and out.”

Quinton Morton-Robertson scored 15 points and Bobby Planutis added 13 for the Mastodons, who were voted the preseason favorites to win the Horizon League title this season.

“It took them making some plays to put us away," said Mastodons coach Jon Coffman. "I think our offensive process in the second half was really, really good. I thought we rebounded at an extremely high level today, only giving up four offensive rebounds with some of the size differential that we gave up. We worked really hard there.

“We've got a lot of areas to improve to win this caliber of game.”

Despite losing four of five starters from last year, Michigan showed that it still has plenty of offense Newcomers Jett Howard and Duke graduate transfer Joey Baker provide the Wolverines with other scoring options. Howard, who played nearly 31 minutes, hit five of 10 3-pointers, while Baker made three of his six shots from long range.