No. 22 Michigan has 3 Howards: Juwan and sons, Jace and Jett 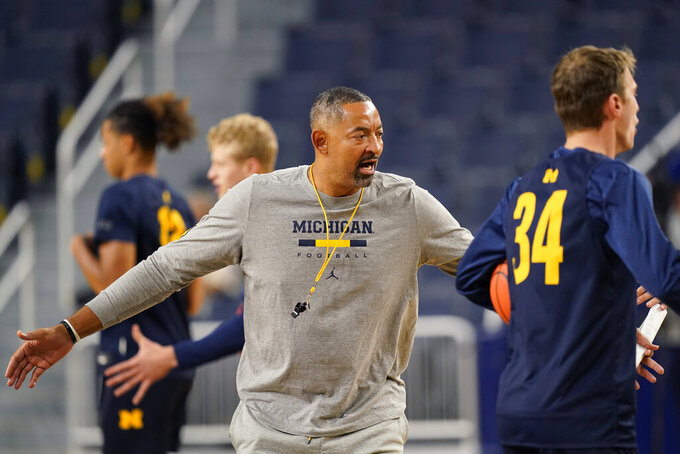 Juwan Howard is entering his fourth season as coach, and his first with two sons on the roster.

Highly touted freshman Jett Howard is expected to be in the starting lineup on the wing. Junior Jace Howard will have an opportunity to play a larger role, possibly as his brother's backup, after being a reserve during his first two years with the Wolverines.

The Howard reunion was widely expected to happen this year, but Tennessee coach Rick Barnes made a strong push while recruiting Jett Howard a few years ago.

“It was very serious," Jett Howard said. “I even told my mom I was favoring Tennessee at one point."

Juwan Howard, a former Fab Five and NBA player, made it clear he's not going to take it easy on his sons.

“At times, there’s going to be some hard, tough love,” Juwan Howard said. “Am I coaching them harder than their teammates? Maybe. Maybe not, but they’re going to get coached.”

Jett Howard found that out recently, noting that he has attention deficit disorder that led to him losing focus.

“If he senses you’re drifting and not sharp, he’s going to address it,” he said. “I didn’t realize that until my second week here.”

In practices, the brothers are often matched up against each other with Jett in the starting group and Jace with reserves in a spirited competition

“I give it to him hard in practice because he’s in front of me for a job now,” Jace Howard said. “I know all of his moves. You can ask him that, too.”

Hunter Dickinson, a 7-foot-1 center, put his NBA goals on hold to return for his junior season after leading the team in scoring and rebounding the previous two years.

“I was in no rush, and I think this is the best path for my career," said Dickinson, who has averaged 16.5 points and eight rebounds at Michigan.

All-Ivy League guard Jaelin Llewellyn, who averaged nearly 16 points over three seasons at Princeton, joined the team as a graduate transfer and his arrival seemed to lead to Frankie Collins's departure for Arizona State.

Jett Howard leads a group of five freshmen, and is expected to play a key role along with 5-11, 160-pound guard Dug McDaniel and 6-10 forward Tarris Reed.

Forwards Gregg Glenn and Youssef Khayat, who was born in Beirut and moved to France when he was 15, will provide depth and may potentially redshirt to have four more seasons of eligibility.

Dickinson and junior forward Terrance Williams grew up near Washington, D.C., and have been friends since they were in the second grade.

“It is something that is special for us," Dickinson said. “He's someone I can always go to and he really helped me when we were freshman, dealing with COVID."

Michigan has at least reached the Sweet 16 the past five years, and Gonzaga is the only other school to pull off that feat with seven straight appearances in the NCAA Tournament round of 16. Howard, who helped the Wolverines win the Big Ten title in 2021, is aiming high in the conference and country this season.

“Our biggest challenge and also one of our biggest goals is winning championships, not just one," he said.

Michian will not play on an opponent's home court until Jan. 7 against rival Michigan State.

The Wolverines will face Emoni Bates, a former basketball prodigy, and Eastern Michigan on Nov. 11 in Detroit.

Michigan will also play Pittsburgh in New York; No. 4 Kentucky in London, shortly after hosting No. 18 Virginia; and the top-ranked Tar Heels in Charlotte, North Carolina.