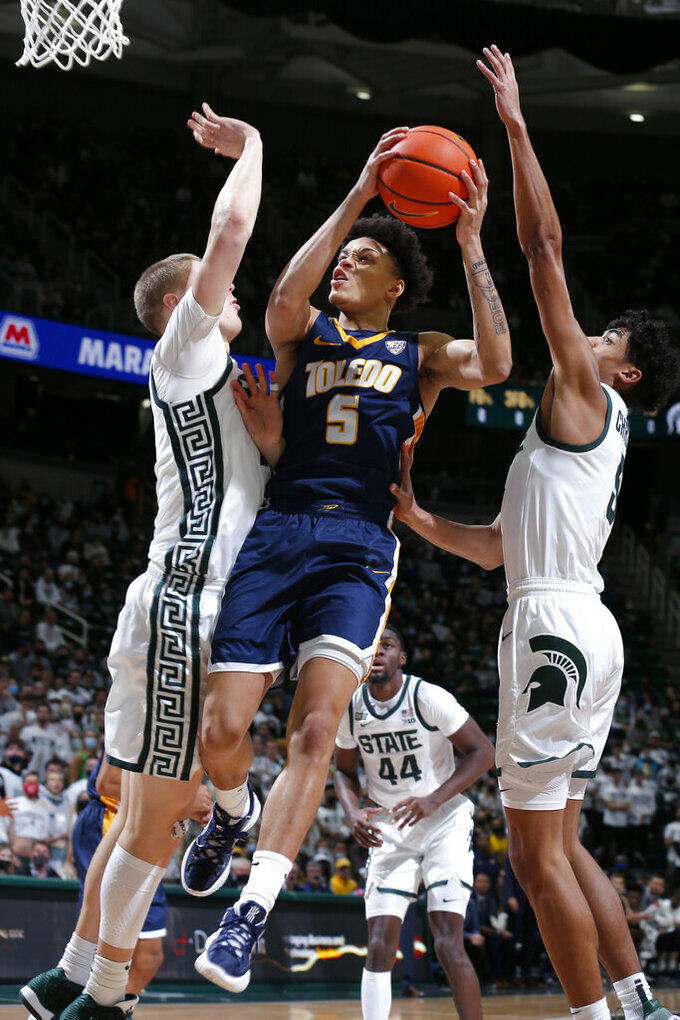 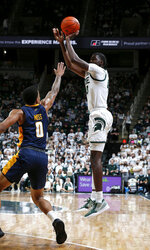 Michigan State took control with a 33-5 outburst in the first half and led by as many as 26 points before the break.

“That was as good a first half as we've played all year, if you look at offense and defense,” Spartans coach Tom Izzo said. “I was really pleased with our penetrations and kickouts, the open 3s. We just couldn't make one in the first four or five minutes and then we started making our 3s and moving the ball.”

Toledo (6-2) was led by Ryan Rollins, who had 21 points. Setric Millner Jr. tossed in 17 points and RayJ Dennis added 13 points and 10 rebounds.

“I just thought we got stagnant,” Toledo coach Tod Kowalczyk said. “Part of it is you have a really hard time communicating because your offense is away from (your bench). That 10-minute stretch, it wasn't good offensive basketball. This is one of the hardest places to play in the country.”

Brown and Bingham combined for 18 first-half points as the Spartans took a 43-23 halftime lead. Michigan State, which was averaging 16.1 turnovers per game, turned the ball over just four times before the break.

The Rockets used a 7-0 spurt to close to 64-55 with six minutes remaining. The Spartans scored the next six points to get their lead into double digits again.

“Toledo came out and absolutely kicked our butts in the first four minutes and that kind of set the tone for the rest of the half,” Christie said of the Rockets' rally.

Kowalczyk was pleased with his team's second-half response.

“I thought we played really well in the second half,” he said. “The first half, we just got sped up and didn't play well.”

The Spartans begin Big Ten play next week with a road game against Minnesota and a home game against Penn State.

Last season, Michigan State visited Minneapolis as a ranked team and got pummeled 81-56. The Spartans will try to avert a repeat this year.

“Conference play is so much different than regular season (nonconference) play,” Spartans coach Tom Izzo said. “Last year, we went up there and got our clocks cleaned."

Michigan State has held opponents in all of its nonconference victories under 70 points. The Spartans set the defensive tone early by turning nine Toledo turnovers into 14 points during the first half. The Rockets were playing a ranked team for the first time and struggled to handle the Spartans’ size and quickness in the first half. They showed resiliency with their second-half comeback.

Michigan State: At Minnesota on Wednesday for Big Ten opener.