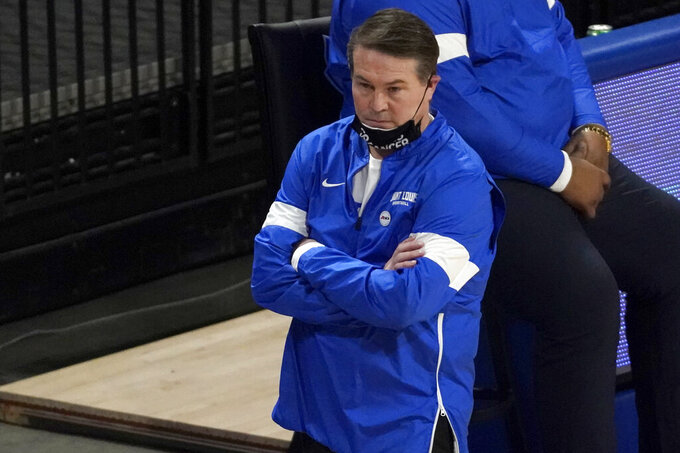 Saint Louis head coach Travis Ford is seen on the sidelines during the first half of an NCAA college basketball game against the Dayton Tuesday, Jan. 26, 2021, in St. Louis. (AP Photo/Jeff Roberson)

ST. LOUIS (AP) — The Saint Louis University Billikens had only four days of practice before taking the court for the first time in 33 days. By the time they found their rhythm, time had run out.

Jalen Crutcher scored 27 points and Ibi Watson added 18 to lead Dayton to a 76-71 win over No. 22 Saint Louis on Tuesday night.

Saint Louis was playing its first game since Dec. 23 as the program suspended team activities due to a COVID-19 outbreak just before the team’s first scheduled conference game Dec. 30.

“I was kind of winded at times, but I knew that was going to effect my shot so I just knew I had to get easier points,” Perkins said. “It was a little tougher than I expected.”

“I don’t want to make excuses," Billikens coach Travis Ford said. “If they're going to tell you to play and we've got to go play, then you've got to respond. You've got to figure it out. Nobody is feeling sorry for us.”

“Any time you can get a win it's big, especially if you can beat a team we have a lot of respect for in Saint Louis," Flyers coach Anthony Grant said after his team's third straight road contest. "Knowing they’re a top 25 team and getting a win certainly helps going into conference but we have to take it one game at a time.”

Saint Louis tied the game for the first time since the opening tipoff when Perkins hit a jump shot to pull the teams even 53-53 with 4:54 remaining in the second half

The teams traded baskets until the Flyers pulled away on an 8-0 run featuring a layup and 3-point basket from Crutcher.

“This is kind of sometimes what you need,” French said. “It sometimes humbles you. I don’t like losing at all and I know my teammates don’t.”

Crutcher, the Flyers' leading scorer, scored at least 23 points for the sixth time this season.

Watson scored 12 of his 18 points in the second half.

Dayton outscored Saint Louis 36-31 in the first half thanks to converting seven of 15 shots from 3-point range.

Saint Louis senior Jordan Goodwin had 11 points and 11 rebounds giving him his eighth double-double in nine games this season to keep him among the nation’s leaders despite Saint Louis missing seven games. Goodwin is one of 10 finalists for the Jerry West Award given to the nation’s best shooting guard.

Dayton: The Flyers sit in fifth place in the Atlantic-10 standings after leading the conference last season.

Saint Louis: The Billikens entered the game seventh nationally in rebounding margin grabbing an average of 10.8 more boards than their opponents.