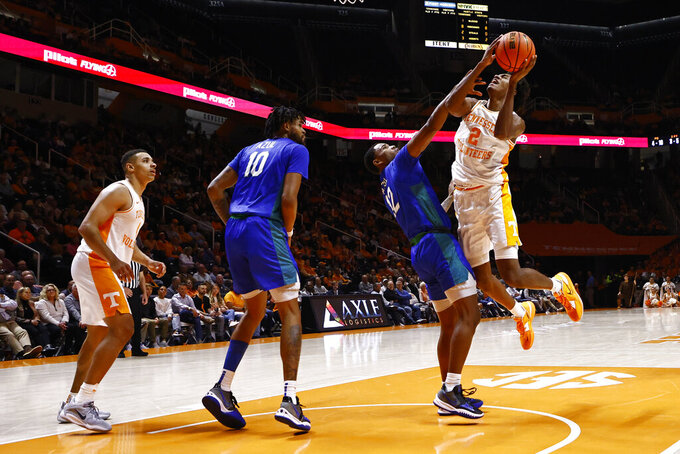 KNOXVILLE, Tenn. (AP) — Olivier Nkamhoua and Josiah-Jordan James each scored 18 points to lead No. 22 Tennessee to a 81-50 victory over Florida Gulf Coast on Wednesday night.

“We focused on learning a tough loss the hard way,” said Tennessee coach Rick Barnes. “We talked about defense. Who do we want to be? What do you want to be?”

The Volunteers (2-1) bounced back from a loss to Colorado over the weekend by focusing on defense and limiting Florida Gulf Coast to 30% shooting (14 of 46).

“They did such a good job defending us,” Florida Gulf Coast coach Pat Chambers said. “Tennessee was really the scrappy team. We knew after the loss to Colorado we were going to have some angry Tennessee guys coming at us.”

Julian Phillips had 11 points and Jahmai Mashack came off the bench and scored 10 points in the second half for Tennessee.

“It's been tough trying to figure out my role on the team,” Mashack said. “It helped that my coaches and teammates had my back.”

Tennessee outscored the Eagles 28-14 in the paint.

“On offense, we want to be an inside-out team,” Barnes said.

Florida Gulf Coast went nearly five minutes without scoring midway through the first half. Meanwhile, Tennessee scored 14 points and built a a double-digit lead. The Vols led 37-20 at the break.

“Our mentality was the biggest difference (compared to the Colorado game),” said Nkamhoua. “We were locked in and took the loss the right way.”

Tennessee’s miserable game against Colorado on Sunday, a team that lost to Grambling, dropped the Vols 11 spots in the poll, to 22nd. The key to recovery is finding a plan that can be implemented when they shoot like they did against the Buffaloes (25% from the field, 27% from 3-point range).

Florida Gulf Coast: A season-opening win at Southern California was a step in the right direction for the Eagles. Since then, losses to San Diego and Tennessee sandwiched a win over Ave Maria. The tough early season schedule should pay off as they bid for the title in the Gulf Coast Showcase.

Tennessee: After shooting 25% from the field in a loss to Colorado, the Vols went back to the drawing board. They tinkered with the starting lineup, sending Zakai Ziegler to the bench — where the point guard excelled in his “sixth man” role last season — and put Josiah-Jordan James back as a starter. He was slowed at the start of the season after offseason knee surgery. Big man Uros Plavisic missed Wednesday's game with an ankle injury from Sunday's loss to Colorado.

Tennessee: The Vols will be facing Butler on Wednesday in the first game of the Battle 4 Atlantis in the Bahamas.