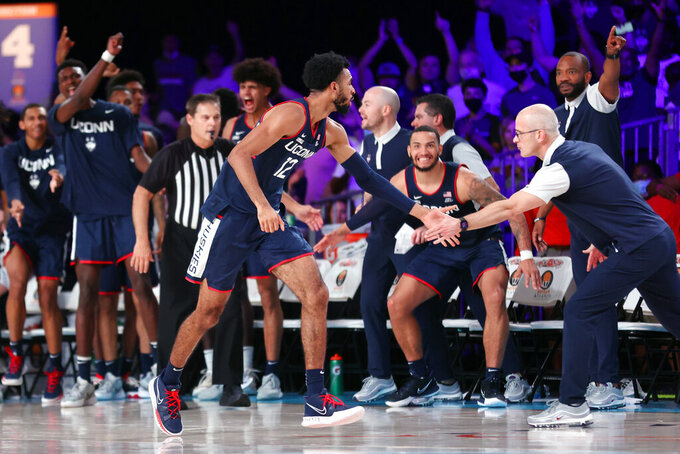 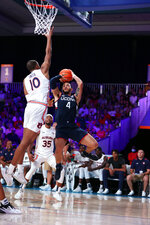 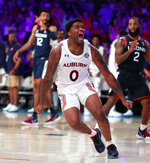 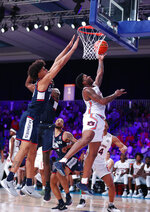 PARADISE ISLAND, Bahamas (AP) — Shot after shot, No. 19 Auburn and No. 22 Connecticut went back and forth at each other seemingly oblivious to pressure from a dwindling clock in an ever-lengthening game at the Battle 4 Atlantis.

It may have been an early season tournament, but it felt like a March-esque thriller — right up to the second overtime when Tyler Polley and Adama Sonogo helped the Huskies finally wrestle away a 115-109 double-overtime victory in Wednesday's first round.

Indeed, the first two-overtime game in the event’s 10-year history had plenty: big shots, clutch responses, frenetic sequences, even players diving on the floor for a loose rebound in the final seconds of a two-possession game with the outcome decided.

Exhausting? Chaotic? Thrilling? UConn coach Dan Hurley would choose all of the above.

“Now you have a chance to sit back and think about how many different ways it could’ve went the other way in regulation, or really from the five-minute mark all the way through to the second overtime,” Hurley said. “Just a multitude of things that went on that were mind-boggling, mind-numbing.”

Polley scored a career-high 24 points and hit the go-ahead 3-pointer with 2:58 left in the second overtime, and had also hit a 3-pointer for the lead with 12.5 seconds left in regulation. He finished 6 of 9 from 3-point range.

Sanogo had a career-best 30 points and stayed on the floor despite playing critical late minutes with four fouls for the Huskies (5-0), who blew a 15-point lead in regulation and squandered a lead late in the first overtime. But the two combined for UConn’s first 14 points of the second overtime as UConn finally pushed ahead for good.

“I definitely thought numerous times we could've had the game won," said R.J. Cole, who had 24 points for UConn. "They weren't going to go without a fight and we knew that. So we continued to just talk to each other and keep pushing, knowing that it's not going to be easy and we're going to have to fight for this one to get the win.”

K.D. Johnson and top freshman Jabari Smith had their own huge performances for the Tigers (3-1). Johnson scored 23 of his career-high 27 points after halftime, including driving baskets in the final seconds of regulation and the first overtime to extend the game.

UConn: Polley’s go-ahead 3 from the right wing started the decisive 9-0 run that pushed the Huskies to a 109-100 lead. Sanogo added two tough baskets in traffic as well as a pair of free throws to cap that run, part of a 12-for-12 effort at the line in the overtimes that helped UConn stay in control as Auburn tried to make a final run.

Auburn: This is the first trip here for the Tigers, who were coming off a 58-52 win at South Florida on Saturday. They looked headed for a big loss in regulation before clawing back in it, but ultimately faded by shooting just 5 of 17 from the field in the second overtime as UConn made its move to end the Tigers' title hopes and send them to the consolation bracket.

As the horn sounded, Polley began skipping to the UConn bench to celebrate with teammates, though the celebration froze for a moment at the sight of Isaiah Whaley laying on the sideline in front of the bench. After a few moments, Whaley got up with a smile to join the handshake line.

Afterward, Hurley said Whaley — who had played 43 minutes — had fainted and that he thought the 6-foot-9 forward “just stood up too quick” from the bench and there were no apparent concerns with dehydration.

Later Wednesday night, the school said Whaley had a “combination of end-of-game excitement, fatigue and dehydration” leading him to feel lightheaded and dizzy. UConn said team medical and training staff determined there is no cause for concern.

That was part of a stretch of seven straight points for the 6-10 McDonald's All-American, who also went 12 of 12 at the foul line.

“He's not afraid of the moment,” Pearl said.

UConn: The Huskies will face Michigan State in Thursday’s semifinals.