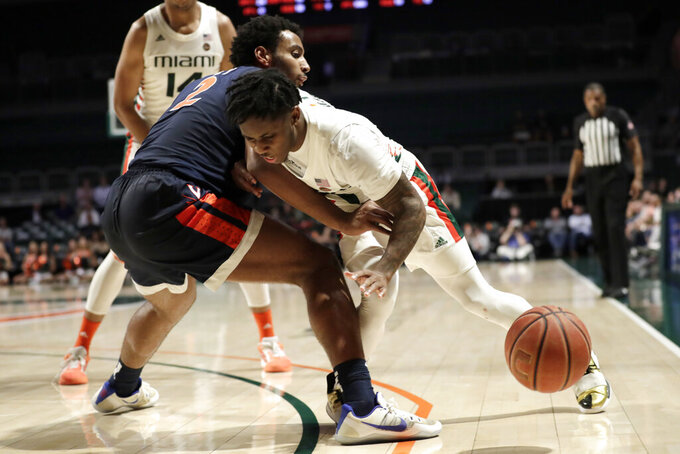 CORAL GABLES, Fla. (AP) — The Virginia Cavaliers won another close one. This time, they had help.

Kihei Clark made both ends of a one-and-one with eight seconds left to provide the winning margin and No. 22 Virginia beat Miami 46-44 on Wednesday night for its seventh victory in a row.

“A terrible way to end the game when you're in a position at the end to win it,” Larranaga said.

The Cavaliers are accustomed to such down-to-the-wire escapes. Six victories during their winning streak have been by a total of 13 points.

“This team has found ways,” coach Tony Bennett said. “It hasn’t always been the most aesthetically pleasing. They’ve grinded out some tough victories.”

The Cavaliers haven't lost since Feb. 8 against Louisville, and the teams meet again Saturday in Charlottesville with the conference title in the balance.

Miami (14-15, 6-13) lost its third game in a row and is winless in seven games against ranked teams this season.

Larranaga took the blame for Beverly's costly, ill-advised foul. The coach said he was complaining to an official, shouting “Foul! Foul!” because he thought Virginia had committed a violation.

“I was yelling to the referee, and Harlond thought I meant for him to foul,” Larranaga said. “One heck of a game, and then I messed it up at the end.”

The Cavaliers' reaction to Miami's mistake?

“Fortuitous,” center Jay Huff said. “I’m trying to come up with a good word for it. That’s an SAT word.

"It wasn’t exactly the prettiest win, but we’ll take it.”

Huff, a junior, tied a career high with 17 points — and they were the Cavaliers' first 17 points of the game. Mamadi Diakite had 14 points and 10 rebounds.

Chris Lykes led Miami with 16 points but hurt his nose in a scrum with 12 minutes left and missed the rest of the game. X-rays were planned.

Keith Stone's 3-pointer for Miami with 2:16 to go made it 44-all. The Hurricanes then committed a turnover and missed two shots before Clark's free throws.

Miami's DJ Vasiljevic missed a runner from 10 feet with one second left. The Cavaliers won even though they missed their final six shots and went without a field goal for the final 4:46.

The score was 9-9 after 13 minutes before the offensive pace picked up — somewhat, at least

The Cavaliers shot 37 percent but won while scoring less than 50 points for the fourth time this season, and held an opponent under 50 for the 12th time.

The first half was a two-man show. Huff was the only Cavaliers player to score in the first 16:42. Lykes scored 14 points in the opening half, including a buzzer-beater to cut Virginia's lead to 24-23 at halftime.

The Cavaliers, ranked for the first time since early January, helped their chances of remaining in the Top 25 next week.

The Hurricanes have lost 17 games in a row against ranked teams. Their most recent win came in February 2018 at No. 9 North Carolina.

Virginia: The Cavaliers play at home Saturday against No. 10 Louisville, which won 80-73 when the teams met on Feb. 8.

“We’re excited to finish out the season on a win, hopefully,” Huff said.

Miami: The Hurricanes conclude the regular season Saturday at home against Syracuse. The Orange have won three of the past four meetings.