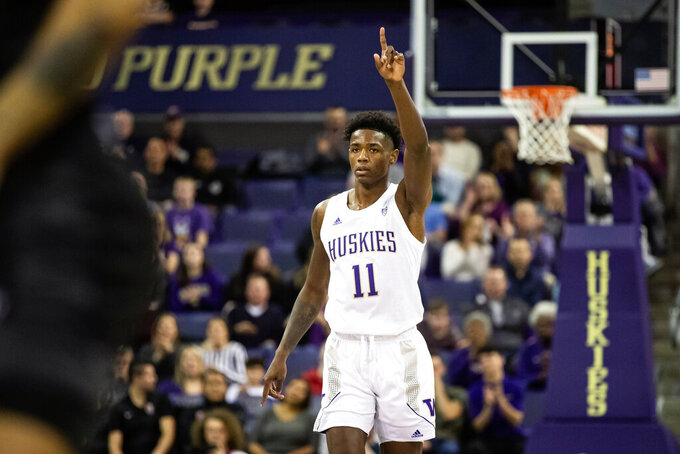 Washington guard Nahziah Carter (11) celebrates his 3-pointer during the first half of an NCAA college basketball game against Seattle, Tuesday, Dec. 17, 2019, in Seattle. (Andy Bao/The Seattle Times via AP) 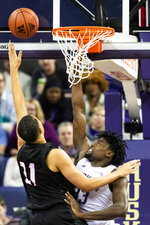 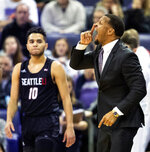 SEATTLE (AP) — Barely a month into his college career, Isaiah Stewart has already become the focus of every Washington opponent.

And it seems no matter what defense is used to try and slow the bruising freshman, it isn't having much success.

“We've got to feed him when he's open," Huskies guard Quade Green said. “You see what happens.”

Stewart dominated inside again while scoring a season-high 27 points, Green added 20 and No. 22 Washington pulled away late for an 81-59 win over crosstown rival Seattle on Tuesday night.

The talented Stewart was mostly unstoppable in the post when Washington (8-2) could get the ball to him. He made 11 of 14 shots and grabbed 13 rebounds on a night when the Huskies were outplayed for stretches by the Redhawks.

In the final nine minutes, Stewart sparked a 31-11 closing stretch by the Huskies that turned a surprisingly close game into a blowout.

“He was just kicking our tail inside," Seattle coach Jim Hayford said. “He's a potential All-American basketball player. He was too much man for us.”

Seattle made many of the hustle plays needed to pull an upset, but it simply didn't generate enough offense, especially in the second half. Terrell Brown scored 15 of his 21 points in the first half, but went long stretches without a clean look at the basket during the final 20 minutes.

The Redhawks are still seeking their first win over Washington since moving back to the Division I level and restarting the crosstown matchup a decade ago. Seattle's last win over the Huskies came in 1978.

Stewart was a major reason why the Redhawks will have to wait at least another year to break the streak.

“It took a long time to get that separation but when we did, it was good," Washington coach Mike Hopkins said.

Stewart scored in the post with nine minutes left for Washington's first field goal in 5 1/2 minutes. It was the start of a 15-4 run by the Huskies that was stemmed only by a couple of baskets from Brown after he'd gone nearly 10 minutes without one.

Stewart added a three-point play, finished off a perfect feed from Jaden McDaniels and tipped in a miss to give the Huskies a 65-54 advantage with four minutes left.

Stewart had 11 points during Washington's run. He has scored at least 12 in every game and has posted consecutive 20-point performances after putting up 21 points his last time out against Gonzaga.

“I feel like all it is is patience and trusting my teammates and not speeding up," Stewart said. “I know my teammates have my back and they trust me to catch when they throw it in."

Seattle held a 33-32 halftime lead and Washington was fortunate to be down by only one. Washington went the final 6:35 of the first half without a field goal. The Redhawks were the better team in the opening 20 minutes and only their shaky shooting kept the margin from being bigger. Seattle outrebounded and outhustled the Huskies while committing fewer turnovers, but couldn't continue it in the second half.

“Seattle U came out and played really hard and it felt like our guys looked a little lethargic," Hopkins said.

Seattle: Brown was the best player on the floor for long stretches before Stewart took over late. The Seattle native entered the game as the leading scorer in the WAC at 20.9 points per game

Washington: One of the big things that stood out from the loss to Gonzaga was the Huskies being careless with the ball. Washington had 19 turnovers in that game. The Huskies were marginally better against Seattle. They had just one turnover in the first 10 minutes and finished with 14.

Hopkins said Washington has decided to have freshman guard Marcus Tsohonis redshirt this season. Tsohonis had appeared in just three games and played a total of 15 minutes.

Washington: The Huskies open play in the Diamond Head Classic on Sunday against Ball State.