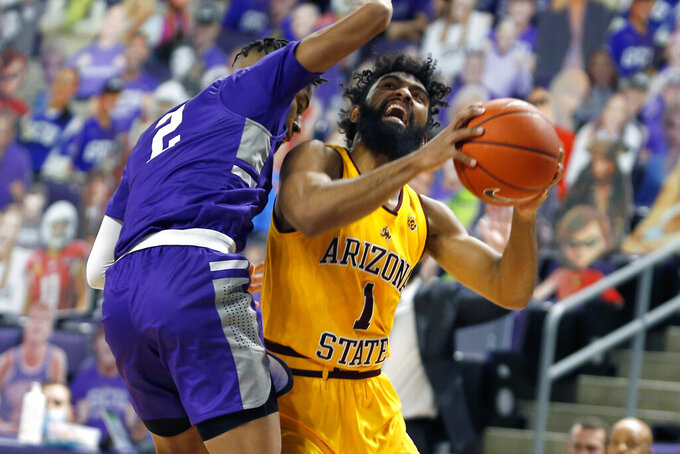 Arizona State guard Remy Martin (1) is fouled by Grand Canyon's Chance McMillian (2) as he drives to the basket during the first half of an NCAA college basketball game, Sunday, Jan. 13, 2020, in Phoenix. (AP Photo/Ralph Freso) 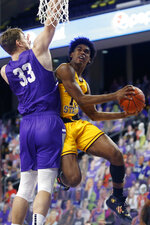 Martin's fire was back against Grand Canyon and the Sun Devils needed every bit of it.

Martin hit a 3-pointer with 9 seconds left and scored 23 of of his 31 points points in the second half, lifting No. 23 Arizona State to a 71-70 victory over Grand Canyon on Sunday.

“I just decided to take it up notch and be myself,” Martin said.

The Sun Devils (4-2) struggled without leading rebounder Marcus Bagley (left calf) in a 12-point loss to No. 24 San Diego State on Thursday. Bagley was still out, but Arizona State made up for it with blistering second-half shooting and a much more aggressive Martin.

Arizona State made 15 of 27 shots in the second half of the neighboring schools’ first meeting since 1980,

Martin, an AP preseason All-American, had nine points on 2-of-8 shooting against the Aztecs, but pushed the action against GCU and hit 12 of 21 shots — none bigger than his corner 3 with 9 seconds left.

“It's just his makeup, how he's wired,” Hurley said. “He's got a big heart and he wants those moments. Some guys thrive in those moments and other guys don't handle so well for whatever reason. He's proven over and over he's that type of guy.”

Grand Canyon (4-1) rallied from an eight-point deficit to take a 70-68 lead in the final minute on consecutive 3-pointers by Jovan Blacksher Jr. and Alessandro Lever.

The Antelopes played solid defense on Arizona State's final possession, but left Martin open in the corner on a kickout. He made the shot and Blacksher's final attempt rimmed out.

Blacksher had 21 points and Lever 18 for the Antelopes, who hit 17 of 31 shots in the second half.

“It was a game where we were down, were able to put some runs together to get back in the game and take the lead,” Grand Canyon coach Bryce Drew said. “It's a great sign of resiliency.”

The schools are just 13 miles apart, but had not met since the Antelopes became a Division I program in 2013.

Defenses dominated most of the first half on Sunday.

Arizona State went 1 for 9 from the 3-point arc and had eight turnovers in the opening 20 minutes. Grand Canyon was 1 for 7 from 3 and had 10 turnovers, but made five of its final seven shots to lead 30-29 at halftime.

The second half turned into an offensive show, both teams trading baskets, neither able to break away until Arizona State went on a 7-0 run to go up 56-48.

The Antelopes wouldn't go away, pulling to 64-62 on a layup by Lever with just under three minutes left. Martin hit a pull-up jumper to put Arizona State up four, but Blacksher and Lever hit consecutive 3-pointers to put the Antelopes up 68-67.

They forgot about Martin, though, and a final shot rimmed out.

“Great basketball game, back and forth those last 10 minutes,” Drew said. “Remy Martin hit shot after shot, none bigger than that last one.”

Grand Canyon may have lost, but pushing a Pac-12 school to the final seconds certainly should help the Antelopes once the WAC season starts.

“These are definitely steps we can build on,” Drew said. “With new players, you never know how they're going to respond and for sure it's going to be a game that can help us.”

Martin is the player who makes the Sun Devils go and they're a far better team when he plays aggressively, as he did against GCU.

Arizona State doesn't have a lot of depth in the frontcourt and not having Bagley made a huge difference against a big team like San Diego State. The Aztecs had 11 offensive rebounds in Thursday's game and scored 17 second-chance points while outscoring the Sun Devils 26-8 in the paint.

Defensive rebounding, understandably, was a huge point of emphasis for the Sun Devils in the days leading up to Sunday's game and they were much better at it. Arizona State limited GCU to just four offensive rebounds and seven second-chance points.

“It's something we talked about quite a bit on Friday,” Hurley said. "We wanted everyone digging and swarming to the ball. We were able to get a few turnovers before of that in the first half and just having more guys close to get a rebound is going to help a little bit."